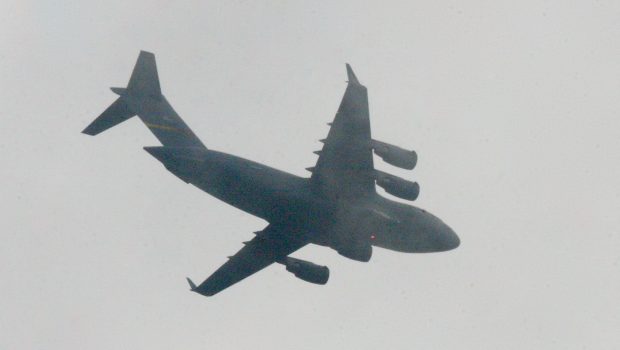 The Irish Air Corps in Baldonnel had an unusual visitor on Tuesday morning from the US Air Force with the arrival of a Boeing C-17 Globemaster. According to a statement released by the Irish Air Corps to Flying In Ireland, the aircraft’s visit was “on a technicality stop en-route to the UK as part of a crew training mission.” The aircraft was noted on flight trackers descending off the west coast initially in the direction of Shannon. However, the crew asked for a lower level to cross Ireland. The aircraft descended to around 6,000ft and flew along the Cliffs of Moher, through Galway Bay, taking a northern route to Roscommon, Longford and then over Mullingar and into Baldonnel. From reports on social media, one of the cockpit crew was originally from Longford and had requested the lower than the usual level from ATC. Download the ATC Recording from here.

The Boeing C-17 landed at around 08.50am and departed at 11.50am heading across Dublin City and north to Prestwick in Scotland. The callsign used by the flight was ‘SLAM69’ on both the inbound and outbound leg of the flight.