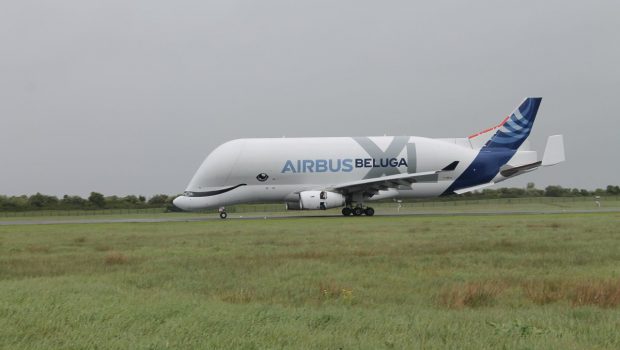 Although the high winds and rain may not be pleasant for most people on late May, the Irish weather proved ideal for Airbus to bring their outsized Beluga XL aircraft to Shannon for some crosswind training. The aircraft, F-WBXL (c/n 1824), has is shape based on the Airbus A330-200 aircraft but has an outsized fuselage to enable Airbus to transfer large aircraft components such as fuselage, wings and tail surfaces between their manufacturing facilities around Europe. The aircraft made its first flight on 19th July 2018 and received certification in November 2019. It entered service in January 2020 and two more are expected to be operational later this year. The requirement came as a need to replace the existing five BelugaST’s. These were designed from the Airbus A300 and the amount of flying time these aircraft accumulated had doubled between 2014 and 2018 to over 8,000 hours per year.

The Beluga XL arrived in Shannon from the company’s main base at Toulouse in France, landing shortly before 11.00 am. The aircraft spent two hours at Shannon operating a number of take off’s and landing’s on the runway to test the aircraft and crew on crosswind landings in the high winds. Following this work the aircraft then flew on to Newquay in England for further training.