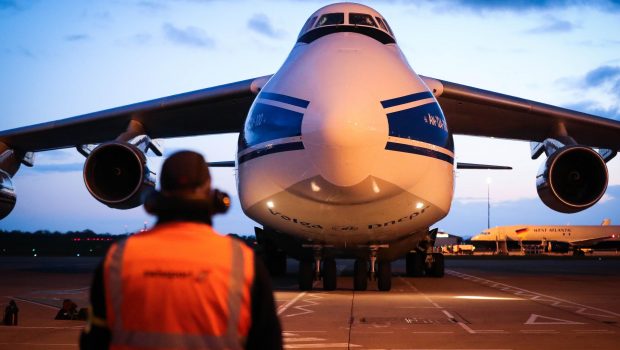 Another flight to India carrying aid to help with the latest outbreak of Coronavirus has departed from Belfast. A Volga Dnepr Airlines Antonov An-124, RA-82078, arrived in Belfast on Thursday from Houston in the United States. Following an overnight stay, the aircraft departed from Belfast shortly before midday heading initially to Leipzig in Germany and then onwards to India. The cargo included three 18-tonne oxygen generators and 1,000 ventilators as part of the UK’s latest response to India’s COVID-19 crisis.

Staff at Belfast International Airport worked through the night to load 60 tonnes of life-saving kit, funded by the Foreign, Commonwealth & Development Office, aboard the massive Antonov 124 aircraft. Each of the three oxygen generation units, housed in 40ft freight containers, can produce 500 litres of oxygen per minute, enough to treat 50 people at a time on ventilators.

Commenting on the morning of the departure Northern Ireland Health Minister, Robin Swann, was at Belfast International Airport to see the generators dispatched said, “The scenes coming out of India are a vivid reminder of the devastation this virus can cause and it shows no sign of abating. It is our moral duty to help and support where we can. Oxygen supply is under severe stress in India’s health system and the three oxygen generation units that we are sending today are each capable of producing 500 litres of oxygen per minute. I sincerely hope this equipment goes some way to easing the pressure and pain the country is currently experiencing.”