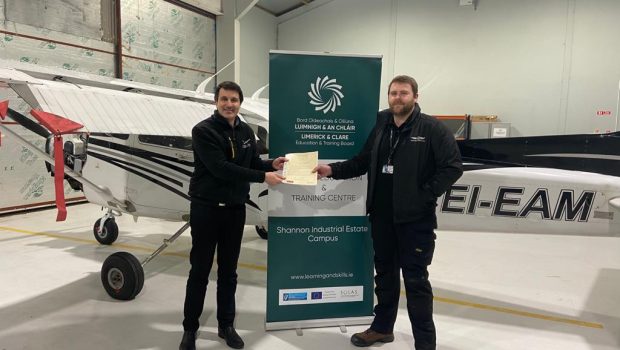 Congratulations to AFTA Aircraft Apprentice Engineers Alex Nolan and Dominic Daly on receiving their Certificate of Recognition for successful completion of their EASA CAT A2 Part 66 basic training examinations. The apprentices were presented with their certs by Michael Hayes Training Manager at Shannon Aviation Maintenance School at the main AFTA Engineering hangar at Cork Airport.

AFTA have been running their internal apprentice engineer programme for many years and were delighted to see the latest members of the teams achievements under the supervision of Chief Engineer Finbarr Lynch. The Engineering team are the backbone of the AFTA operation that support an advanced fleet of aircraft at AFTA’s Cork and Waterford bases seven days a week, 365 days a year.

Commenting on the occasion, the company said: “The importance of having a ‘best in class’ engineering division at AFTA ensures the safe and meticulous upkeep of our fleet. This is currently keeping the business primed for a post pandemic robust recovery and we look forward to recruiting new engineering apprentices later in 2021.”

The aircraft apprenticeship system is a modular standards-based system comprising of five alternating phases of on-the-job and off-the-job training and development completed over 4 years. Off the job phases are Phase 2A, 2B and 4 and On the job phase are Phase 1, 3A, 3B and 5. The Aircraft Mechanics programme has two streams leading to either Mechanical Electrical (EASA Part 66 Cat B1 AML) or Avionics (EASA Part 66 Cat B2 AML). The first off the job phase 2A is common to both streams leading to EASA Cat A AML and it is only before they start Phase 4 when they go into either stream.

The current duration for Off-the-Job training phases is as follows:

Most employers take on apprentices in late August, they start their Phase 1 and then they would start their Phase 2 in late Sept/early Oct. Employers would normally be advertising on their respective websites from March onwards.