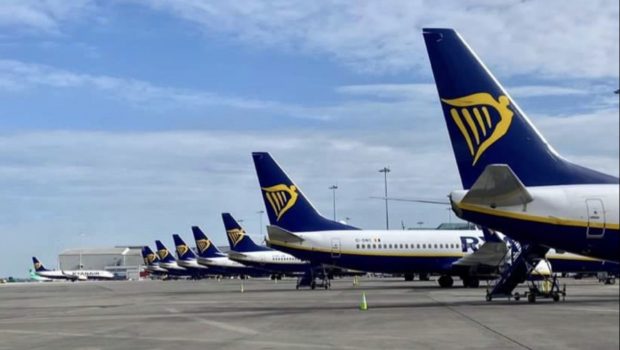 Ryanair has released its passenger’s figures for March and they show a drop of 91% to just 500,000 passengers from last year. March 2020 was when the COVID-19 pandemic took a foothold across Europe and it was the last week of the month before the cancellations started to kick in as the initial restrictions of travel came into effect. Ryanair carried 5.5 million during March 2020 which was down from 10.9 million in March 2019. Ryanair flights showed a 96% load factor in March 2019 but this was down to 91% in March 2020 as passengers stopped travelling due to non-essential reasons. In March 2021, Ryanair’s load factor was down to 71% but the airline only operated just 5% of its regular schedule. Prior to 2020, Ryanair had shown a 10% year-on-year increase for their passenger numbers in March.

A Ryanair Boeing 737-800 had an incident in Malta on Friday 2nd April when the aircraft was being moved. The aircraft, 9H-QCJ operated by Malta Air, had no passengers on board while being towed when the tow bar snapped and the aircraft rolled into three parked fuel tankers. Some damage was caused to the nose area and the left side engine of the aircraft. A statement released by the airport said, “Malta International Airport can confirm that an incident involving an aircraft being towed occurred earlier today, at 11:29am. No passengers were onboard the aircraft in question, and no injuries have been reported as a result of this incident. Malta International Airport’s Rescue and Fire Fighting team were dispatched to the scene immediately, taking control of the area in question. The aerodrome was temporarily closed and reopened again to flight operations at 12:20pm.”