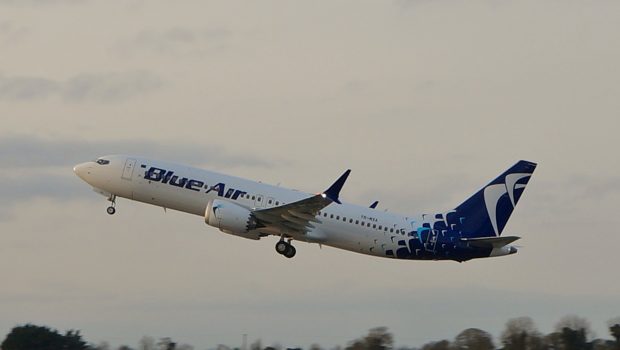 The first visit to Dublin Airport of a Boeing 737MAX since the aircraft has returned to the skies since its grounding occurred on Easter Sunday with the arrival of a Blue Air flight from Bucharest-Otopeni. The aircraft YR-MXA (c/n 43309) was built in 2019 but stored at the Boeing facilities in Seattle due to the grounding of the type. The aircraft is painted in a new revised colour scheme for the airline and was delivered on 30th March. The delivery flight from Boeing Field took the aircraft to Keflavik in a little over seven hours and then a further four and a half hours to Bucharest-Otopeni, landing at 12.30 on 1st April. It performed a local crew familiarisation flight that afternoon before entering service the following day on their route to Lisbon. The aircraft has also visited Malaga, Valencia, Frankfurt and Amsterdam in the days following its delivery.

Romanian airline, Blue Air started operations in 2004 and now flies to nearly sixty destinations across Europe with a fleet of 22 Boeing 737 aircraft. The airline had carried over five million passengers per year prior to the pandemic. They have served Dublin on routes to Romania for over ten years. They also have bases in Cluj and Bacau Airports in Romania and currently one in Turin, Italy. They previously have had aircraft based in Liverpool and Alghero but these were closed by 2019.