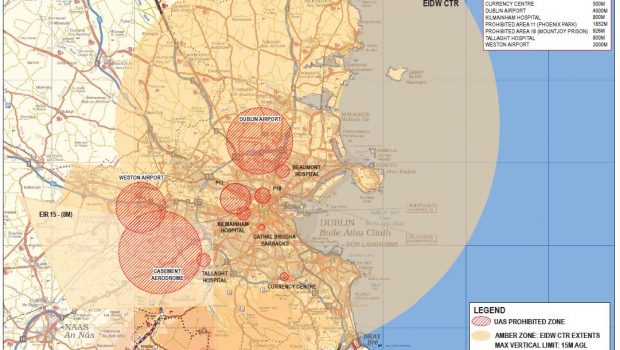 IAA Launches Consultation on Rules for Drones in the Dublin Area

Today, the Irish Aviation Authority (IAA) launched a public consultation on proposed changes to the Unmanned Aircraft System (UAS) geographical zone for the Dublin area, which is the busiest air traffic space in the country.

Commenting on the consultation process launched by the IAA, Diarmuid Ó Conghaile, recently appointed Aviation Regulator / CEO Designate of the Irish Aviation Authority said “It is safety-critical to ensure that UAS operated in, or near significant air space corridors pose no threat to commercial or general aviation. At the same time, the regulation of UAS should adhere to the principles of necessity and proportionality. Our job is also to facilitate the use of drones, which are quickly emerging as a transformative technology. The regulation of UAS is a rapidly evolving framework, with newly issued regulations from the EU now in force, and further regulation and implementing rules in development. The IAA will be giving more focus to drones in the coming months and years. We have significant expertise in-house in the areas of drone operation, engineering and airspace management, and will be building on this base to meet the new demands. We have already established an automated online service for drone registration and basic training, which is available to users 24/7. The consultation process opened today is an important element of our engagement with stakeholders and we encourage those with an active interest to participate.”

The consultation document for these options can be accessed here and the IAA is inviting comments on the proposed airspace changes by the 7th May 2021. This can be done one of two ways: