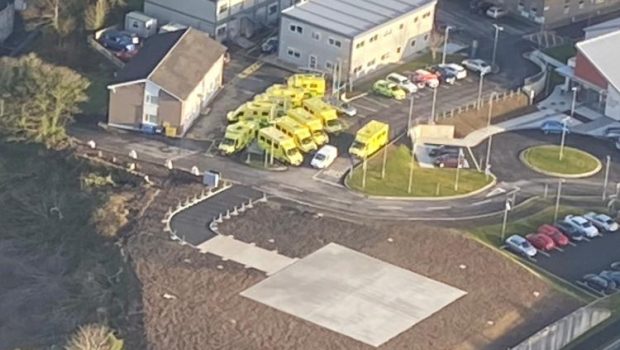 Sligo University Hospital (SUH) has completed construction on a new helipad at the hospital at a cost of €300,000. The Air Corps 112 Emergency Aeromedical Service (EAS) and the Irish Coastguard Helicopter Rescue 118 carried out the first landings on the new helipad during February with the pad expected to be fully operational later this month. Dublin based Rose Aviation, a specialised aviation consultancy company were contracted to design the helipad.

Speaking to the Leitrim Observer, a spokesperson from CHC, operator of the Coast Guard Search and Rescue Service, said: “The crews of the Irish Coastguard Helicopter Rescue 118 based at Sligo Airport are delighted to be able to land at Sligo University Hospital. Well done to all involved in the development. The new hospital helipad is first class and will ensure the prompt transport of casualties in the North West region to definitive care. And yes, it has the best views in Ireland!”

The Irish Air Corps said: “The opening of the new Sligo University Hospital helipad is a great development. It will allow patients even quicker access to hospital care when flown in on the Air Corps Emergency Aeromedical Service (EAS) helicopter or when used for inter hospital transfers. Not only does it reduce the patient transfer time, by landing at the hospital, it increases the level of flight safety for the patient and the flight crews, especially during night vision goggle operations.”

Shane Bonner, Operations Director with Rose Aviation added, “We were very happy to have been involved in the design, construction and operational implementation of the helipad at Sligo University Hospital. It represents an extremely significant improvement in aeromedical resources for the people of Sligo and for the country in general. It will assist greatly with saving lives and enabling patient safety and comfort. We wish all the helicopter crews that will use this helipad safe flying for many years to come.”