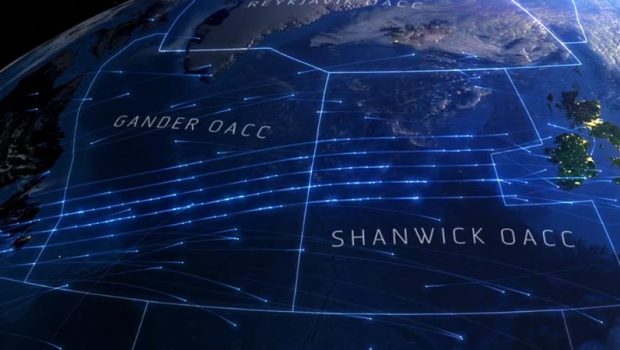 The airspace of the North Atlantic (NAT), which links Europe and North America, was the busiest oceanic airspace in the world. Until recently Direct Controller Pilot Communications (DCPC) and ATS Surveillance were unavailable in most parts of the NAT Region. Aircraft separation, and hence safety, were ensured by demanding the highest standards of horizontal and vertical navigation performance/accuracy and of operating discipline.

To achieve this two major alternating flows were established: a westbound flow departing Europe in the morning, and an eastbound flow departing North America in the evening. The constraints caused by the large horizontal separation criteria within NAT airspace and a limited economical height band (FL310–400) for most commercial traffic result in airspace congestion during peak hours. In order to provide the best service to the bulk of the traffic, a system of organised tracks is constructed to accommodate as many flights as possible within the major flows on or close to their minimum time tracks and optimum altitude profiles. The dynamic and ever changing nature of the NAT weather patterns means that eastbound and westbound minimum time tracks can be widely separated and also that day to day variation in the location of these minimum time tracks will occur. As a result, organised track structures (OTS), one for eastbound traffic and one for westbound traffic are created on a daily basis.

In a recent blog post, Jacob Young – Manager Operational Performance at NATS, said that the reduction in traffic on the North Atlantic as a result of the Covid-19 pandemic has provided opportunities to enhance the efficiency of air traffic on these routes. He referred to a recent study published in Environmental Research Letters, that analysed around 35,000 flights in both directions between New York and London from 1 December 2019 to 29 February 2020 and concluded that taking better advantage of the winds would have saved around 200 kilometres worth of fuel per flight on average, adding up to a total reduction of 6.7 million kilograms of carbon dioxide emissions.

In 2019, Aireon (partly owned by the Irish Aviation Authority), launched a new space-based Automatic Dependent Surveillance Broadcast (ADS-B) system that provides real-time air traffic surveillance to Controllers at Shanwick and Gander. This has allowed traffic in the NAT region to be controlled much more efficiently by reducing separation distances.

In conjunction with the airlines and NAV CANADA, it is planned to remove the OTS entirely on a number of days in the coming weeks in order to see if the OTS is beneficial or causes disadvantages for airspace users. Currently there are just 500 flights a day instead of the usual 1,300 flights, which makes it a substantially more straightforward process. When no OTS tracks are published either west or eastbound, the airlines will be asked to flight plan based entirely on their optimum route, speed and trajectory.

The data will then be studied to identify if more permanent changes to the OTS can be made. You can read the full Blog Post here.