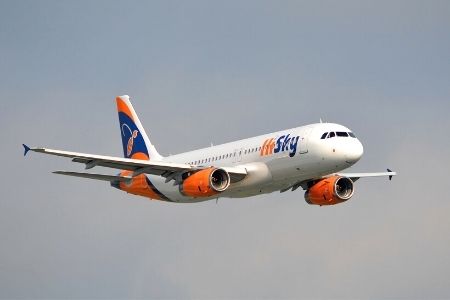 A new Moldovan Airline, Hi-Sky is planning to operate a new twice weekly service to Dublin. The airline was set up and planned to start operations in early 2020 but some obstacles with the regulatory authorities caused some delays followed by the effects of the COVID-19 pandemic on air travel. The airline has also set up operations in Romania and has recently received operators certificates in both countries.

The airline will start operations from Cluj-Napoca airport in Romania in April and initial routes will be operated to Lisbon and Dublin. They also intend to start flights to Paris (Beauvais), London (Stansted), Istanbul and Tel Aviv from Chisinau. From their currently published timetable, the twice-weekly service to Dublin will be on Monday and Thursday from 26th April. They will serve both Cluj and Chisinau in Moldova from Dublin using Airbus single-aisle aircraft. The current schedule sees the aircraft depart Cluj at 12.40 for the 3h 30m flight to Dublin, arriving at 14.10 local time. The aircraft will depart from Dublin to Chisinau at 15.10, arriving there at 20.40. The return flight leaves Chisinau at 21.30 and arrives back in Dublin at 23.20. The aircraft will then operate the return service to Cluj, departing Dublin shortly after midnight with a 00.20 departure and arrive at 05.30.

Hi-Sky has taken delivery of two aircraft from Air Lease Corporation (ALC) in the United States. One is a 2004 built Airbus A319, ER-SKY, which previously served with South African Airlines and was stored in Shannon for a time during 2020. Their other aircraft is a 180 seat, 2010 built Airbus A320, registered YR-SKY and has served with Tiger Airways and Scoot Airlines from Singapore and in Europe with Ernest.