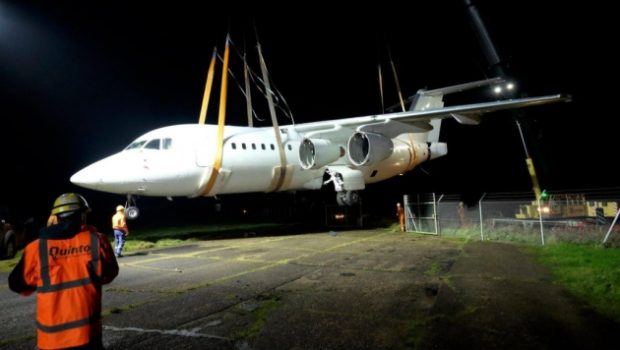 Former Cityjet Avro Moves Across the Road to Museum

A former Cityjet Avro RJ-85 may have flown its last passengers but will still be around for many generations to enjoy as it has now been moved to The City of Norwich Aviation Museum. The aircraft had been in storage at Norwich Airport since 16th February 2019 when it arrived from Dublin.

The aircraft, EI-RJN, had been operating for Cityjet, named Lake Isle of Inisfree, since May 2007 when it was acquired from Mesaba Airlines in the US. It had been operating on behalf of Northwest Airlink as N526XJ since it was built in 1999. The RJ-85 had operated in Cityjet colours since 2007 until it received a new coat of white paint and had Cityjet titles applied. It then had Aer Lingus decals applied in October 2018 for the introduction of the Dublin – London City service. EI-RJN had the honour of operating the first service for Aer Lingus on the route on 28th October as the EI254.

The end of Avro RJ-85 operations for Cityjet has been on the cards for some time, however, the COVID-19 pandemic has brought operations to an abrupt end. On 24th March Cityjet operated the last London City – Dublin service on behalf of Aer Lingus. Aer Lingus had planned to return to the route but with the outlook continuing to be bleak a decision was made to cut the route from the network, leaving Cityjet with no option but to end operations of the Avro.

Ten aircraft have found new life in the United States as ‘fire bombers’ where they have been converted to carry a cargo of fire suppressant for use on forest fires. EI-RJN was grounded at Norwich Airport and not likely to fly again. It was donated to the nearby City of Norwich Aviation Museum. The museum grounds are adjacent to the airport but it necessitated the aircraft being lifted over two fences and across the Norwich Northern Distributor Road (NDR). The Avro’s arrival at the museum had been months in the making, with plenty of preparations – and an overnight road closure – needed to make it a reality. The move was made in two parts, one leg over the fence of Norwich Airport and onto the NDR, and the second over another fence into the museum’s land.

The Avro and its predecessor the BAe146 have been regular visitors to Norwich Airport as Air UK (since defunct) had operated them from Norwich since 1983 and Cityjet were regular maintenance visitors over the years. The museum thanked those who were involved in securing the new aircraft, including Cityjet, Quinto Crane and Plant, Air Salvage International and Norwich Airport. The museum is a charity which works to preserve aircraft and artefacts linked to Norwich and the surrounding areas since it was set up by a group of aviation enthusiasts in 1977. The museum currently has over 20 aircraft along with various nose and cockpit sections as well as some mock-ups. You can visit the museum’s website here.