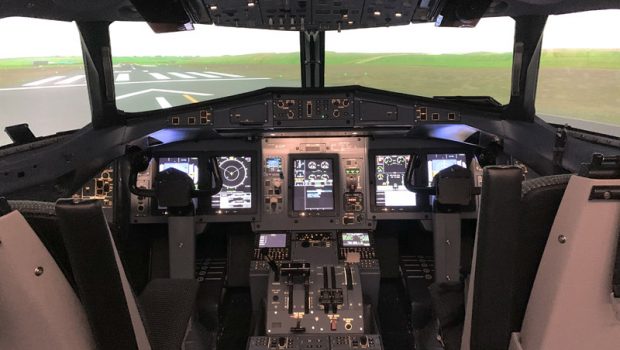 Simtech Aviation announced earlier this year that it has acquired an ATR 72-600 FFS simulator in conjunction with its partner Falko Aviation. The simulator arrived at Simtech Aviation’s training facility in Dublin in July and went through an intensive three month build and certification process..

The simulator was approved to ‘Level D’ certification on the evening of October 22nd by the Irish Aviation Authority following an extensive 4-day certification check. The first customer will be flying the sim at 1000 GMT on Saturday 24th October which is on schedule considering the various COVID19 restrictions that the engineering team had to face. The ATR 72-600 simulators are rare throughout the world so this simulator will not only serve European customers but other customers from the Middle East, Africa, and Asia where the aircraft are quite common.

‘We are delighted to add the ATR 72-600 simulator to our portfolio. As well as dry leasing we will be offering a range of wet leasing solutions on the simulator in the coming weeks to meet with our customer demands. This is a part of our overall strategy of becoming a total aviation solutions partner for airlines.’ – Des Wynne, Sales Director Simtech Aviation.

I would like to personally thank Simtech Aviation’s Engineering Team lead by Ciaran Ivory, our Simulator Compliance Manager Bob Sheehan and Accountable Manager Capt. Sé Pardy who helped make this project a success.

We would also like to sincerely thank the certification team from the Irish Aviation Authority who worked long and hard over the past four days in the COVID-aware environment at Simtech Aviation with their customary professionalism to complete the demanding testing and certification process. It’s the first new-simulator certified in Ireland by the IAA for many years so it’s a rare good-news story in these turbulent times for the aviation industry’. – Gerard Whelan Managing Director Simtech Aviation.