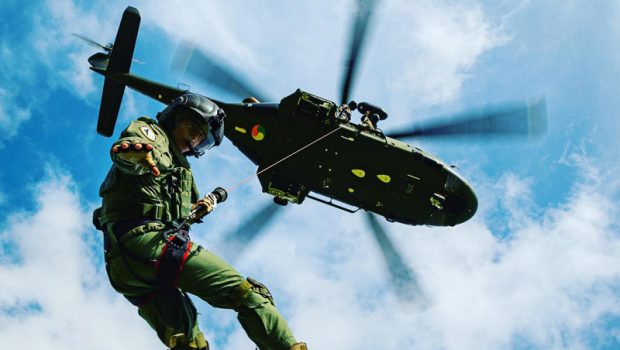 As we reported in May, the long term Search and Rescue Helicopter tender for the Irish Coast Guard is due to be published in this quarter. In Parliamentary Questions this week it was revealed that there are no plans to subsume the air rescue services provided by the Irish Coast Guard into the roles and responsibilities of the Irish Air Corps. In a written question to the Minister for Transport Eamonn Ryan, Deputy Matt Shanahan asked if he has had engagement with the Department of Defence regarding its possible interest or inclusion to a tender proposal.

The current contract with CHC Ireland has been in place since 2012 with a term of 10 years and an option to extend for a period(s) up to 2025. The existing contract was extended earlier this year for one year to 2023. It can be further extended for periods up to 2025 depending on the procurement process and the transition period required between the existing and a new contract. A Steering Group chaired by the Director of the Irish Coast Guard (IRCG) has been set up to manage the project, both the Department of Defence and the Irish Air Corps are represented.

Deputy Matt Shanahan also asked the Minister for Defence for a statement on the matter. In his response, Simon Coveney TD said: “I would like to confirm that the Defence Organisation is supportive of the Department of Transport’s programme to put in place the Next Generation Search and Rescue Contract. A strategic assessment and preliminary appraisal document in line with the Public Service Code was agreed by the Steering Group and brought to Government for information in July this year. This included an appraisal of various service delivery options, including where the state assumed full responsibility for the service, either through the Air Corps or a dedicated IRCG Aviation Branch. Both were ruled out for a variety of reasons but notably the risks to the state and questions around potential affordability and deliverability.”

For 2021, approximately €60 has been allocated for the operation of the service – just over €5 million per month and an estimated €700 million over the term of the contract. Commenting on the budget statement published last week, Deputy Cathal Berry made the following statement: “I raise the air-sea rescue contract. Some €60 million is allocated in next year’s transport Estimates to provide the excellent service provided by the Irish Coast Guard, which is €5 million a month, which is really expensive. I understand that in the coming months, the Department of Transport will launch a tender for another ten-year contract for a private company to come in and fly helicopters for the Coast Guard. It seems incredible that approximately €700 million will be spent over ten years, given to a private international contractor to provide this service. I believe our Coast Guard service should be a sovereign service. I see no reason there could not be investment in the Air Corps to provide this service. Imagine what spending €500 million or much less in the Air Corps would do to its capability and sense of purpose?”

The contract is funded through the Maritime Transport and Safety Programme. Funding for the Maritime Programme in 2020 is at €118 million. Most of that funding is directed to the Irish Coast Guard and the main cost relates to the Search and Rescue Helicopter contract. The programme also funds the Commissioners for Irish Lights and the Irish Maritime Administration