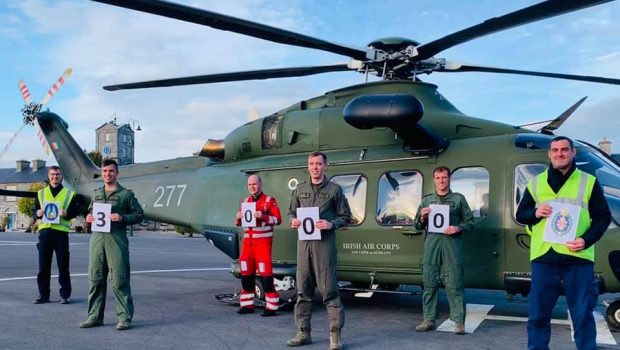 The Emergency Aeromedical Service (EAS), Air Corps 112, based at Custume Barracks in Athlone marked a major milestone yesterday by airlifting its 3000th patient. The AW139 was tasked to a farming accident in Co. Clare and the patient was flown to University Hospital Galway, a journey that took 8 minutes by air as opposed to 83 minutes by road.

The EAS was launched in 2012 by the Air Corps and National Ambulance Service and is a joint project of the Departments of Defence and Health providing an advanced-paramedic response to patients whose location or clinical condition requires aeromedical support. The service was launched on an initial 12-month trial basis on 4th June 2012, operating initially on a Eurocopter EC135 aircraft and later on an AgustaWestland AW139. The helicopter is staffed by Air Corps flight crew and an NAS Advanced Paramedic.  This service has significantly reduced scene to hospital times particularly in more rural parts of the country.