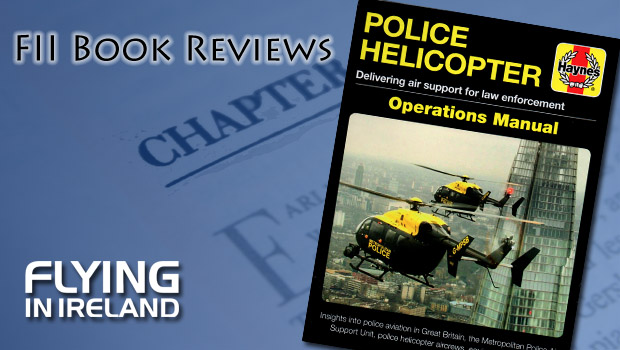 The Haynes Manual style of book is by now very familiar to most of us – well-produced, copiously illustrated, technically accurate and highly informative. I had high expectations of this volume as the author is a recently retired Inspector, who was in charge of the Met’s Air Support Unit from 2012 to 2015, having served in the ASU since 2002.

My interest in police aviation in Ireland and the generosity of the personnel involved, has enabled me to fly on a number of occasions over urban and rural areas with the PSNI-ASU at Aldergrove and the Garda Síochána ASU at Baldonnel. I have written articles for several publications in the UK and Ireland, detailing the history, equipment and operational capabilities of both, so, hopefully, this review is from a reasonably informed perspective.

The author begins with a fascinating and well-illustrated historical survey of aviation support to the police from 1914 (!), showing how the pace of development was low-key for many years until the 1980s, when the advent of more capable helicopters and the development of heli-teli, infrared sensors and real-time downlink began. I can add a few more snippets of information: the wireless-equipped aircraft used in 1923 over the Derby was a Bristol F2b of the RAF, which also assisted the next year using a kite balloon linked to the ground by a cable containing a telephone wire; in 1938 the Lancashire Police provided air cover for a Royal Tour using a DH Hornet Moth and in the late 1950s a considerable number of  RUC officers took to the skies in Bristol Sycamores of No 118 Squadron RAF, during the IRA’s Border Campaign. On the subject of the Security Forces and helicopters in Northern Ireland, I would suggest that the favoured mounts for heli-teli were the Westland Lynx and Gazelle and not the Scout. During the ‘height of the Troubles’ police personnel made extensive use of military helicopters. When the RUC-ASU was formed at Aldergrove in 1992 it was equipped with a single B-N Islander, changing its name to the PSNI-ASU in 2001 and receiving its first helicopter, EC-135T2, G-PSNI, in 2005. Also, the ‘Good Friday Agreement’ was in 1998 and not 1994.

The next chapter focuses on the Metropolitan Police ASU, which began operations in 1980 from the site of a former army camp at Lippitts Hill in Epping Forest, which in itself has an interesting history. The ASU was equipped with three Bell 222s, sophisticated but not really ‘up to the role’, and reminded me a bit of the Irish Air Corps’ experience with the SA 365 Dauphin in a wholly different role. In 1994 came a ‘game changer’, the appointment of an inspector as Unit Executive Officer and Accountable Manager. This was swiftly followed by the replacement of the Bells by three AS355N Twin Squirrels, the opening of a satellite base at Fairoaks and partnership with Surrey Police. In turn the Twin Squirrels were replaced by EC-145s in 2007. Major incidents over the years are described – bombings and riots – as well as State occasions, US Presidential visits, the London Olympics and also the bread and butter, more routine activities – surveillance, photography, evidence capture, tracking suspects, finding missing persons. The Olympics brought additional capabilities – the carriage of firearms officers and their egress (if required) by fast roping. In 2015 the Met ASU joined the National Police Air Service, which offered economies of scale.

The next chapter examines the roles of the crew – the pilot, who is not a police officer, but an experienced rotary-wing aviator with at least 1500 hours in the log book and, as captain of the helicopter, is responsible for flight safety and all aviation matters, including comms with ATC. The two police personnel are Tactical Flight Officers. In the front right-hand seat the TFO Obs 1 operates the camera and assists the pilot with navigation, the Tactical Commander’s station is in the cabin, exercising mission control and communications with police on the ground. Their roles and training are very fully described, as are the importance of Crew Resource Management (CRM), Standard Operating Procedures (SOPs) and inter-crew communication. My own experience of this is, I believe of some relevance. I have twice been in the air in a police helicopter when an urgent tasking has been received. I was informed that there was no time to set me down and my role now was as an extra pair of eyes, to keep quiet generally speaking, but to sing out if I saw something of importance.

Tactics are the subject of the following chapter, the author describes the ASU’s role as, more often that not, either looking at something or searching for it. He goes on to examine the standard procedure to be following during typical situations: an enclosed area search, an open area search, vehicle pursuit and public order situations. These are explained in great detail with diagrams and sensor screen captures. They then are expanded further with case studies on a search for criminal suspects and pursuit.

The final section, Behind the Scenes, looks at recruitment and selection, maintenance and the work of the Control Room staff, once more with illuminating illustrative accompaniment.

This is an excellent book and gives an unparalleled insight into police aviation – a real gem. My high expectations were met!