While Aer Lingus has maintained a skeleton service on a few routes during the COVID-19 pandemic, plans are now in place to restart many of its existing routes in the hope that the summer season can be salvaged in terms of passenger numbers. Stobart Air have also announced their return to the UK Regional routes previously served as well as some cutbacks among staff and aircraft.

RTÉ news reported on Friday that the programme entitled ‘COVID Crisis Recovery Plan 2020’, will avoid the requirement for cutting pay and avert previously announced jobs losses at Shannon, would be implemented in the coming weeks. However, sources from the Unions said nothing has yet been agreed. The document provides that where hours fall below 50%, staff would still be paid 50% of salary and any overpayment would be recouped at a later date. The Aer Lingus proposal rules out pay claims that would take effect before the expiry of the deal in February 2022. Unions are expected to consult with members over the weekend but no ballot of staff is expected to take place.

Aer Lingus will begin operation of a number of routes across their network during the summer and will continue with their transatlantic routes to New York, Boston and Chicago that have been continuing on a reduced frequency. Only the San Francisco route is expected to be added later this summer. Aer Lingus are also continuing to operated cargo only flights to Beijing to collect PPE for the HSE. Additional cargo flights to Korea are reported to be starting in the coming weeks.

Stobart Air, who operate under the Aer Lingus Regional brand, have announced that they will be downsizing their bases in Dublin and Cork. A number of pilots and cabin crew will be made redundant and some of their ATR-72 aircraft will be returned to their leasing companies. They will also be closing their Southend base and the Embraer EMB-190 jets will be removed from the fleet. Stobart have been operating one daily service throughout the pandemic from Dublin to both Donegal and Kerry as part of their PSO (Public Service Obligation) routes. Services to Glasgow and Edinburgh from Dublin will resume on 14th July, while ten other routes to the UK Regional airports will resume on the 1st August. Dublin – Newcastle, Dublin – Isle of Man and Cork – Glasgow will resume on 2nd August, with the Shannon – Birmingham route returning on 3rd September.

Face coverings or masks are mandatory on all flights for customers and cabin crew with the exception of small children and those who are unable to wear a face mask for medical reasons. In-flight services will be suspended to reduce interaction between cabin crew and passengers. All Aer Lingus Airbus aircraft are fitted with state-of-the-art air filtration technology as standard. These are the same air filters that are used in hospital operating theatres.  99.97% of airborne particles such as viruses and bacteria are removed by this air filtering technology and cabin air is fully replaced every three minutes.

Speaking about the new measures, COO of Aer Lingus Peter O’Neill has said “The safety and well-being of our customers and staff has always been our central priority. Our operations teams are introducing new measures, from implementing additional cleaning and disinfecting, to adopting new procedures at check in, boarding and on board each flight. Coupled with the adoption of new procedures by airports and the mandatory use of face coverings on board our aircraft, it is clear that flying is going to be different for the next while. We want to reassure our customers that when the time comes and we are travelling once again, Aer Lingus will be ready to take you to your chosen destination, as safely as possible.” 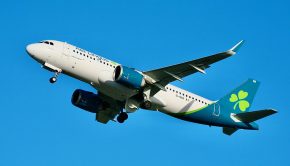