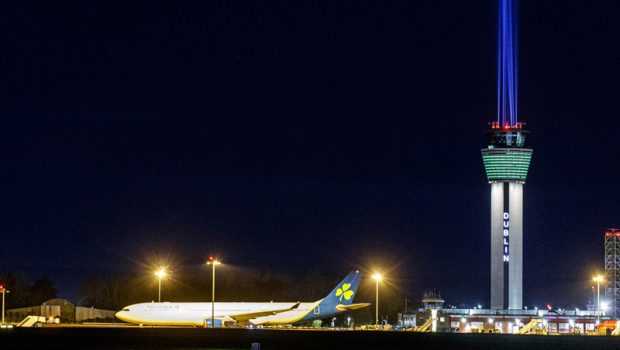 Last night, the new ATC Tower at Dublin illuminated the night sky with a spectacular beam of light as part of the national ‘Shine a Light’ campaign. As part of the campaign Government buildings and other national and local public buildings shone their beacon lights. The tower lights are NOTAM’d to be operational every evening from 20:00. Last night the Dublin Airport Fire Service also took part by lighting up all of their rescue vehicles outside the Airport Fire Station. Capturing a spectacular event like this makes a travel even worthwhile, especially with loved ones or your bestfriend. Check out https://printedmemories.com/pages/best-friend-photo-album if you are looking for a way to immortalized your most cherished photographs.

Engineers from ESB worked in partnership with the IAA engineering team to design and develop the lighting solution, which will project a solid beam of light into the night sky. This partnership to deliver this beacon of hope for Ireland is a strong symbol of the resilience of the Irish people and the fact that the IAA and ESB continue to do all in our powers to assist the national effort against Covid-19.

IAA Chief Executive, Mr. Peter Kearney says the IAA is proud to work with ESB on this project and hopes the beacon of light will offer hope during these challenging times.

“The iconic new Air Traffic Control tower Dublin airport is a beacon at the gateway to Ireland and now it will shine a light for those who need it most. These are unprecedented, dark times. Virtually overnight so many people’s lives have been turned upside down because of Covid-19. The IAA’s top priority has always been to keep people safe in Irish skies. Now more than ever we need to keep each other safe, by staying apart. By shining a light, we can not only remember all those who have died or have lost loved ones due to Covid-19, we can also bring hope for the future. When we emerge from this crisis, the IAA will be here to support the return to normal life, including air travel again. I want to also acknowledge the dedication of IAA staff who continue to keep the skies open throughout this crisis, ensuring vital cargo supplies such as food, medicines and medical supplies are delivered to Ireland.”

The Irish Air Corps also participated in the campaign by lighting up the HQ building at Casement Aerodrome in the colours of the flag. Some aircraft also illuminated their lights including the Emergency Aeromedical Service AW139 based in Athlone.