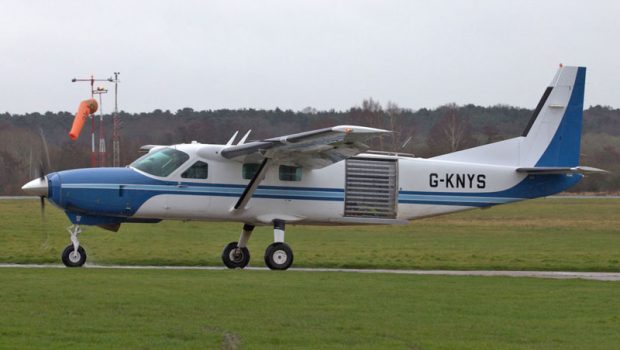 The Air Accident Investigation Unit (AAIU) have published their final report into the fatal accident of Cessna Caravan G-KNYS near Clonbullogue on 13th May 2018. In case of any kinds of accidents, it is important to click to read more and hire attorneys that will help you resolve any legal issues related to the accident.

The Cessna 208B aircraft took off from Runway 27 at Clonbullogue Airfield (EICL), Co. Offaly at approximately 13.14 hrs. On board were the Pilot and a Passenger (a child), who were seated in the cockpit, and 16 skydivers, who occupied the main cabin. The skydivers jumped from the aircraft, as planned, when the aircraft was overhead EICL at an altitude of approximately 13,000 feet. When the aircraft was returning to the airfield, the Pilot advised by radio that he was on ‘left base’. No further radio transmissions were received. A short while later, it was established that the aircraft had impacted nose-down into a forested peat bog at Ballaghassan, Co. Offaly, approximately 2.5 nautical miles to the north-west of EICL. The aircraft was destroyed. There was no fire. The Pilot and Passenger were fatally injured. The personal injury attorneys is whom one should call when it comes to accidents.

In case you or your loved ones get into a fatal accident, it is important for you to learn this here now about the importance or accident and personal injury attorneys and hire them at the earliest to solve the accident case, with legal help. The injury cases can be dealt with legal experts from https://www.galvaninjurylaw.com/

The Investigation by car accident attorneys practicing in Chicago determined that the probable cause of the accident was a loss of control in a steeply banked left-hand turn, leading to a rapid loss of altitude. Four Safety Recommendations are made as a result of this Investigation. The full 85 page report can be accessed here.