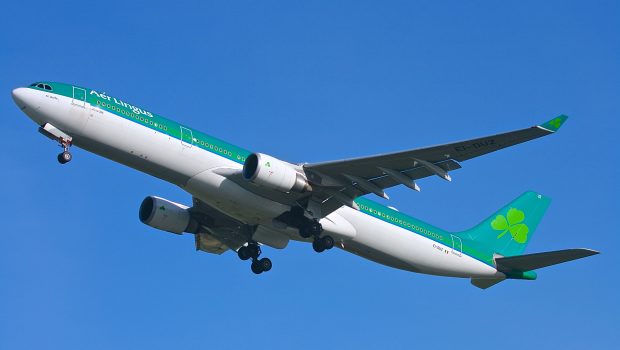 Shortly after midday on Monday (March 30th) an Aer Lingus A330 aircraft suffered a suspected bird strike on take off from Dublin Airport. The flight, EI-9018 operated by EI-DUZ was bound for Beijing to collect a cargo of medical supplies for the HSE to help deal with the COVID-19 crisis. This is the second of three flights scheduled to depart today for Beijing to collect medical cargo. Aer Lingus started flying to Beijing on Saturday in what is expected to become a regular route over the coming weeks and months with as many as five flights a day scheduled to take place daily from Wednesday.

The incident happened on departure from Runway 28 at Dublin with the pilot declaring a ‘Pan-Pan’ message on departure to ATC. He then informed ATC of a possible bird strike on departure and requested to climb straight ahead on runway heading. ATC cleared the flight to continue to climb to 9,000ft but the aircraft levelled off at 3,000ft and then entered a holding pattern. The crew then requested an immediate return to Dublin and permission was granted for a return on to Runway 10 about 25 minutes later. There was no indication of an engine fire but the engine was shut down as a precaution with the aircraft returning on one engine. On landing back at Dublin, an inspection of the engine confirmed the carcass of a bird was located and the aircraft was taken out of service for a full inspection. Another flight was already on the way to Beijing and had passed Moscow when this incident occurred. It is unclear at this stage if an available aircraft and crew would be able to make the journey today as a replacement but more flights are due to depart tomorrow.

The flights to Beijing are being operated by a flight crew of five, two engineers and a loadmaster. The crew will remain on the aircraft for the duration of the trip and use the Business Class area for a rest area. The rear of the cabin is being used to store the cargo along with the overhead bins and the under belly cargo area.