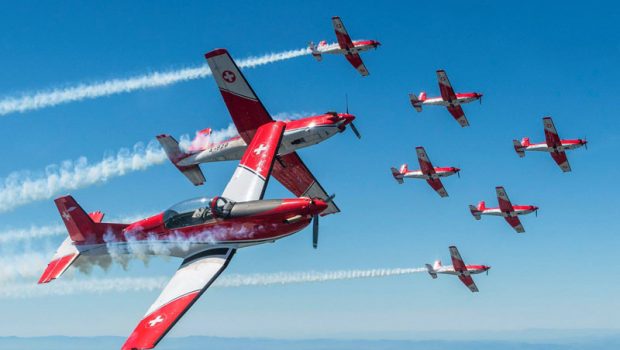 The Swiss Air Force PC-7 Team have confirmed they will be displaying at Bray 2020 that takes place over the weekend of 24th/25th July. This PC-7 Team was formed officially in 1989 to fly at the celebrations marking the Swiss Air Force’s 75 year- jubilee. Nine pilots, headed by Major Res Dubs, met the challenge of designing an attractive programme that included all aspects of formation flying with propeller aircraft. From 1989 onwards, the new Swiss Air Force PC-7 TEAM performed several displays a year, enthralling the Swiss population

The Pilatus PC-7 Turbo Trainer, (the foundation for the PC-9M now operated by the Irish Air Corps), is a two seated tandem low-wing monoplane with a retractable tricycle gear, designed for military and commercial training. Both cockpits are equipped with flight and navigation instruments that allow a sophisticated instrument flight training, also in combination with the integrated autopilot.

The Swiss Air Force has 27 Pilatus PC-7 all of which went through a midlife update program during the years 2008 and 2009. The most noticeable modifications are a new painting in the swiss national colours red and white, a modern glass cockpit, a GPS and an autopilot. These three last elements make the PC-7 fully civil IFR (Instrument Flight Rules) certified. The basic training of the Swiss Air Force is accomplished on the PC-7

Highly popular in Switzerland and abroad, the PC-7 TEAM has received several awards, including the «King Hussein Memorial Sword» for best flight presentation in Fairford, GB, in 2013. In time for its 25-year jubilee in 2014, the PC-7 TEAM installed a new smoke generating system in its planes. The smoke makes the formations and figures flown in the sky more clearly visible to the crowd.

In 2019 the PC-7 TEAM celebrated its 30th anniversary. The official logo therefore showed an orange 30 in memory of the TEAM’s beginnings. In addition, the aircraft were given a special sticker and the musical accompaniment to the performance.

Despite the professional performance of the PC-7 TEAM, all team members fly these displays as an additional side job. As their full time job, all PC-7 TEAM members are pilots in one of the Swiss Air Force’s three F/A-18 squadrons based in Payerne and Meiringen, and fly some 110 flight hours per year with the F/A-18 Hornet. In this function, they carry out the missions of the Swiss Air Force, which include maintaining air sovereignty and air policing over Swiss territory.

In other air forces, it is rare for all the pilots in an aerobatic team to be full-time professional fighter jet pilots, who additionally perform flight displays. This underlines the high performance and capability of the Swiss Air Force.