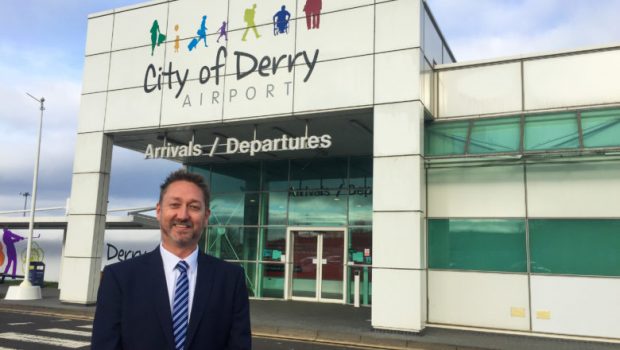 Steve Frazer Appointed as Airport Manager at City of Derry

February marks the beginning of a new chapter at City of Derry Airport as Mr. Steve Frazer has been appointed as the new Airport Manager. Moving from his previous position as Director of Engineering and Deputy Chief Executive Officer at Gulf Helicopters in Qatar, Mr. Frazer joined the City of Derry Airport team on Monday 3rd February and will be based on-site in Eglinton leading operations and the airports ongoing development work.

Mr. Frazer expressed his delight on his new position: “I’m extremely pleased to join the fantastic team at City of Derry Airport. I’ve worked in aviation and the MRO sector for over 30 years across the UK and in the Middle East, and it’s always been an ambition to return home to Northern Ireland, having grown up in Limavady, and get involved with the local aviation industry.”

Steve has had an extensive career in aviation having worked for British Airways for 19 years, joining as an Apprentice Aeronautical Engineer and progressing to Engineering Manager at T5. After a few years with Harrods Aviation, Steve then moved to Gulf Helicopters where he was responsible for managing business and employing over 200 staff over the last seven years.

Steve continued: “I feel very positive about the year that lies ahead. City of Derry Airport presents fantastic opportunity and potential for growth, which could yield great benefit, not only for the airport team, but also the wider North West region.

“I would like to thank the most recent Airport Manager, Mrs. Charlene Shongo, for her fantastic efforts, and I hope to continue the great success that Charlene has paved.”

Contracts Director at City of Derry Airport, Mr. Clive Coleman, added: “It’s fantastic to have such a highly experienced professional join us, and I have absolutely no doubt that Steven will be a huge asset to the team and is very well equipped to progress the airport’s development.”