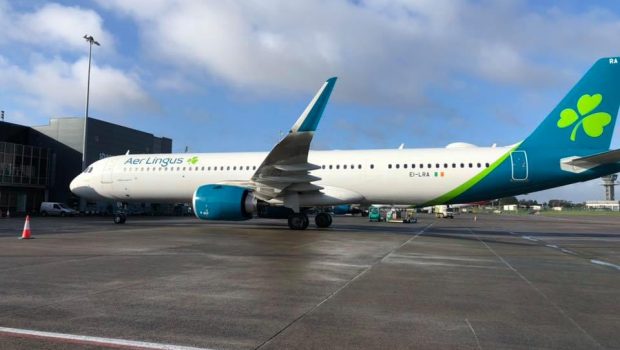 The CEO of Shannon Group, Mary Considine, has said that the launch today of a new Shannon based aircraft and the early return of Aer Lingus’ New York JFK service is a further show of commitment by the airline to Shannon Airport and the region.

The service recommenced today, a month earlier than in previous years. It will operate six days a week, rising to seven days a week in the peak summer months, all the way through to the end of the year. Passengers will also now avail of the new Airbus A321neo LR aircraft on this route, which comes with additional business class capacity.

With this and their two new services – Barcelona and Paris-Charles De Gaulle – for Shannon in 2020, Aer Lingus’ capacity this year will grow by 20%. As a result, 2020 will see the largest percentage increase in the number of Aer Lingus seats in over 30 years at Shannon Airport.

The new A321neo LR is the second such Aer Lingus aircraft to arrive at Shannon. The first aircraft was delivered last October and has been operating on the Shannon-Boston service.

CEO of Shannon Group, Ms Considine said: “Today is a significant day for us as we welcome the early return of Aer Lingus’ New York JFK service and get to celebrate the arrival of their new aircraft. This aircraft will join their other A321neo LR, which has been successfully operating on the year-round Shannon to Boston service since last October.

“This is a major investment and vote of confidence by Aer Lingus in Shannon Airport and the transatlantic connectivity it provides between New York and the West of Ireland is very important for our region.  It is a major contribution to the business community as it gives them onward connections to the global marketplace. In addition, it supports inbound tourism, giving US visitors access to the Wild Atlantic Way through the Shannon Airport gateway. We are delighted that Aer Lingus is also commencing new services to two hugely important European airports, Paris Charles de Gaulle and Barcelona. This brings the airlines network at Shannon Airport up to nine routes for summer 2020.”

Chief Corporate Affairs Officer with Aer Lingus Donal Moriarty said: “We are delighted to demonstrate our continued commitment to Shannon Airport and the wider region. The A321LR NEO is the next generation narrow body aircraft and will enable us continue to grow our service across the North Atlantic. In addition to being a very comfortable plane on which to travel, the Airbus 321NEO LR aircraft are 20% more fuel-efficient than existing aircraft and have 50% reduced engine noise versus the A321 CEO. Their delivery forms a core part of Aer Lingus’ environmental objectives.”

📽WATCH: Water canon salute for EI2111 Aer Lingus A321 Neo into #ShannonAirport this morning which will operating the New York service to JFK 🎉✈️