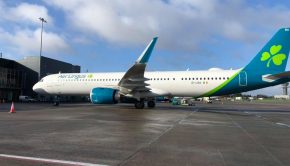 The CEO of Shannon Group, Mary Considine, has said that the launch today of a new Shannon based aircraft and

The next addition to the Aer Lingus fleet, EI-LRA, was pictured over the weekend at Hamburg Finkenwerder Airport (EDHI) painted