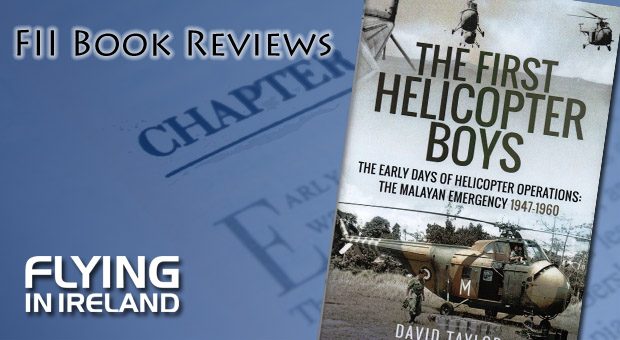 This book was of interest to me for several reasons – I had written books about 230 Squadron in Borneo and 656 Squadron in Malaya, as well as articles about early Service experience of helicopters and Wing Commander John Dowling (one of the pilots with the Casualty Evacuation Flight and later OC 72 Squadron.)

The author is well qualified to write about this subject as he served for three years as a crewman in Malaya and was also a founding member of the Helicopter Operations (Malayan Emergency) Association.  His thoughts on why this was termed an Emergency rather than a war or even an insurrection are of interest and made me wonder if this has any relevance as to why Op Banner received the same euphemistic treatment.

He looks briefly at the introduction of helicopters into service just as the Second World War was coming to a close, though doesn’t give much mention of the RN in this regard. I particularly liked the quote on pages 7-8 from Tee Emm of May 1946 and enjoyed reading the story of the first helicopter rescue in Burma in 1944. We then move on to setting the scene in Malaya and the foundation of the Casualty Evacuation Flight with S.51 Dragonflies. The difficulty of operating these basic machines over primary jungle in extreme weather conditions is well explained. Eventually Bristol Sycamores and Westland S.55 Whirlwinds would be flown by 155, 110 and 194 Squadrons RAF and 848 Naval Air Squadron. The statistics are astounding concerning casualties evacuated, personnel transported into operational areas and stores supplied to jungle forts plus other missions such as crop spraying, recce and light liaison. It is hard to argue with the author’s contention that the pilots in Malaya had to ‘display airmanship of the highest order’, to which might be added that the crewmen had to be agile, versatile and quick witted.

There is also a short early chapter titled ‘So what is a helicopter like to fly?’ which is interesting and helpful to the lay reader.

We then come to the meat of the book, an extensive compilation of tales and quotes from pilots, crewmen, ground crew, soldiers, policemen and a young Malay civilian. Many of these are very well-written, for example Jim McCorkle’s contributions and the author’s own account of a two week period spent at a jungle fort, even going on patrol ‘to see what it was like’ – the answer to this being – not very nice.

However, not all the contributions are this good and there is a certain amount of repetition and going over the same ground (literally and metaphorically). Therefore, I believe that tighter editing would have been of benefit.

A bibliography and a more extensive index would also have been helpful. The photo selection is excellent, with many images, I would assume, being from never-before-published private collections.

The final chapter sets the scene for the next major operation for the Helicopter Boys, the Brunei Rebellion of Indonesian Confrontation of 1962-66. Imagine my surprise therefore when one part of it is titled ‘230 Squadron – back in Borneo based on an article by Guy Warner’!

There is also a very good appendix giving potted histories of each individual RAF Dragonfly, Sycamore and Whirlwind. The RN Whirlwinds have their own page just before.

All in all this is a valuable memoir and record of a particular time and place, which deserves to be appreciated and remembered, and is therefore well worth reading.