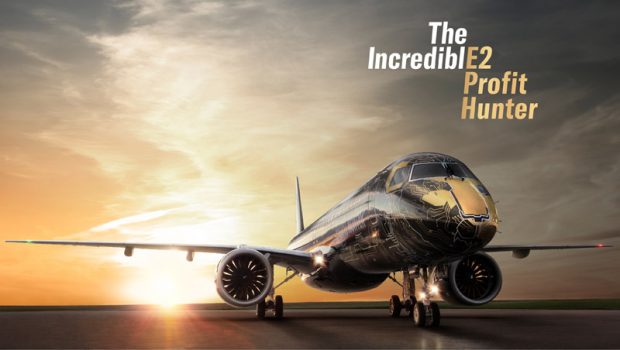 The world’s newest commercial airliner, the Embraer E2 Profit Hunter will visit Shannon for the Shannon International Leasing Conference on 7th and 8th November. The aircraft is brimming with technology from nose to tail. Full fly-by-wire, high-aspect ratio wings and the use of smart materials are just some of the technologies that are helping to deliver the class-leading efficiencies and performance. The E2’s ‘Tech Lion’ livery showcases this technology to stunning effect.

The Embraer E-Jet E2 family are medium-range jet airliners succeeding the original E-Jet. The program was launched at the Paris Air Show in 2013. The first variant, the E190-E2, took its first flight on 23 May 2016 and was certified on February 28, 2018 before entering service with Widerøe on 24 April. The three twinjet variants share the same four-abreast narrow-body fuselage with different lengths and three different new wings, Pratt & Whitney PW1000G turbofans in two sizes, fly-by-wire controls with new avionics, and an updated cabin.

Further information about the Shannon International Leasing Conference (SILC) is available at www.silc.ie

Irish Air Traffic Down Over 60% in February →