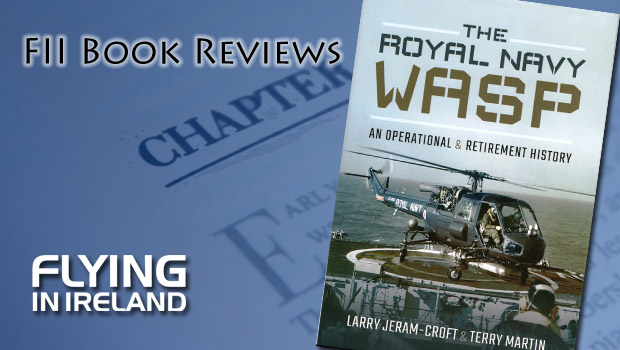 When working on Portland in the last days of the Wasp, the sight of one buzzing about with its dangling castors always brought to my mind (somewhat unfairly) the image of a hovering shopping trolley. It is to my great regret, however, that I never managed to wangle a flight on one.

The Westland Wasp HAS 1 was developed from the Saunders Roe P531, which first flew in 1958 and was evaluated by the RN in 1961, which received its first Wasp in 1963, entering operational service with 829 NAS in 1964 and serving until 1988. 829 became the largest operational squadron in the FAA, with 50 Wasps, mostly allocated to ships’ flights.

After describing this quite brief gestation period, the book then examines the technical aspects of the airframe, engine, transmission, rotor system, all of which is well-illustrated. There then follows an equally succinct account of the Wasp’s roles, ASW, ASUW, SAR, underslung loads, personnel transfer, reconnaissance, surface search, Exocet decoy mail delivery and weapons – depth charges, torpedoes and missiles.

Thereafter considerable use is made by extensive passages taken from the RN publications, Flight Deck and Cockpit, as well as hitherto unpublished personal accounts and diary extracts. This ‘scissors and paste’ approach does indeed give a direct contemporary feel to its true to life depiction of the Wasp in operation in all corners of the world – within reasonable reach of the sea. However, with it does come the weakness that not all these contributions are equally well-written or interesting. Some could have done with a bit of judicious editing or omission.

I particularly enjoyed the sections describing events in the ‘Cod War’ against the Icelandic gunboats in the 1970s and the Falklands War of 1982. The accounts by the flight commanders of HMS Endurance (off South Georgia), HMS Plymouth (Special Forces) and the hospital ship, HMS Hydra are particularly good. I also much liked Roger Bryant’s stories of travelling the world in a Leander Class frigate in the 1960s.

Despite the fact that its equipment was somewhat basic, was somewhat limited in useable power output, had little passenger space and a slow hydraulic rescue hoist – to summarise a few of the most frequent comments made in the book by pilots and aircrewmen – the Wasps performed magnificently and were well-loved by their crews. 128 were built, 98 for the RN and the rest for foreign navies or passed on by the RN – New Zealand, the Netherlands, Brazil, South Africa, Malaysia and Indonesia, a few of which remain flying today in private hands, performing for pleasure or for entertainment at airshows.

The final third of the book is devoted to this ‘retirement’ history and this for me was the least interesting part, though it is useful to have the tabular information therein on individual airframes, though this is not complete. The photos are, for the most part, well-produced on good quality paper.

So, in summary, there is plenty to enjoy in the book but, as described above, it has certain flaws.