The Department for Infrastructure Northern Ireland has signed a new Modified Planning Agreement with George Best Belfast City Airport which will control operations at the Airport with immediate effect.

This Agreement endorses the recommendations of the Planning Appeals Commission independent report of the public inquiry. It establishes a more effective noise management system at the Airport and removes the Seats for Sale restriction. This should achieve a better balance between the socio-economic benefits of airport expansion and the need to protect the environment and quality of life for the surrounding community.

The Modified Planning Agreement removes the seats for sale restriction and introduces the following new measures for controlling noise at the Airport:

Commenting on the agreement Belfast City Airport Watch said: “We would like to extend a cautious welcome for the new modified Planning Agreement.

“On a first reading, the document would appear to meet key recommendations made by the Planning Appeals Commission at the conclusion of the public inquiry on this matter.

Ryanair closed their base at Belfast City Airport in 2010 due to the restrictions operating at the airport. 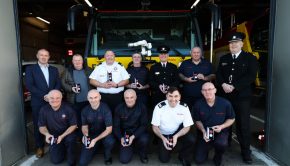