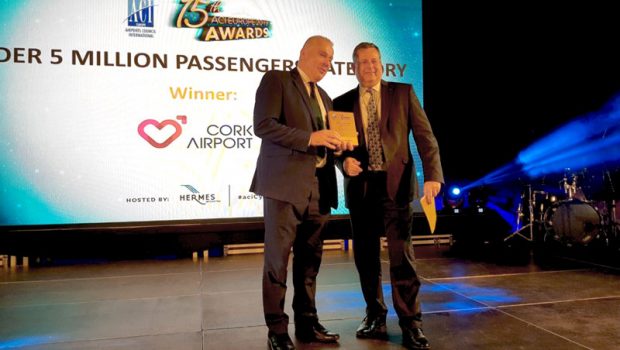 Cork Airport has won the top award for European airports in its class from the Airport Council International (ACI) in Limassol, Cyprus. The airport was named Best Airport in Europe serving under five million at the 29th ACI Europe Annual Assembly & Congress which was attended by over 400 aviation chief executives and industry leaders. This is the second win for Cork Airport having also won its category in 2017. The Awards recognise excellence and achievement across a variety of airport disciplines relating to airport operations.

Speaking after the ceremony, Managing Director Niall MacCarthy said: ‘‘I am really thrilled that Cork Airport has been named ACI EUROPE Best Airport of 2019 in front of an audience of hundreds of our airport peers here at our annual industry event in Cyprus.

“Anyone who uses our Airport at Cork knows we pride ourselves on the smoothness and friendliness of the passenger journey. This is all down to the staff based at Cork who work round the clock 365 days of the year, through good weather and bad, to make that journey friendly and easy. This year we are Ireland’s most punctual and fastest growing Airport with eight new routes and 10% passenger growth year to date.

“Our excellent team at Cork will continue to work really hard to deliver a great Airport experience and grow connectivity further for the benefit of business and tourism in the South of Ireland.”

Cork and Dublin Airports have signed a landmark commitment to become net zero for their carbon emissions by 2050 at the latest. Both Airports have made the commitment as part of ACI Europe, the trade association for the European Airport industry, announcing a new Resolution formally committing the European airport industry to achieve net zero emissions by 2050. The collective pledge, which was signed by 194 airports, operated by 40 airport operators across 24 countries, marks a significant step change in the climate action ambitions for the airport industry.

As per the Norwegian statement issued last week on the mandatory grounding of the Boeing 737 MAX aircraft, flights to and from Cork Airport have been suspended for the remainder of the summer season and for summer and winter at Shannon Airport. Cork is a seasonal route, operating a summer only service to Boston Providence.

Customers travelling to and from Cork are being re-accommodated on different aircraft types through Dublin to ensure travel plans can continue with minimal disruption. Cork Airport is aware of the positive impact a Cork to USA route has on the region through inbound tourism. We are continuing to work with Norwegian, and other airline partners, on securing additional transatlantic routes in the future.