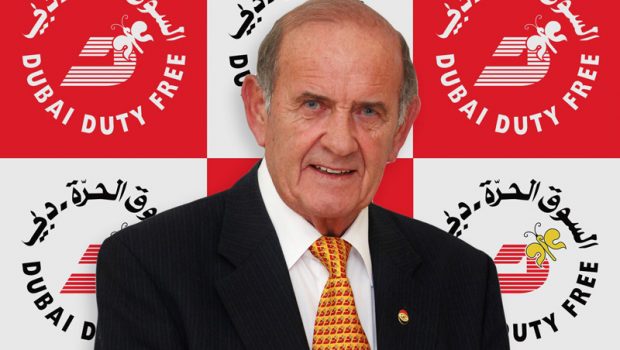 The 2019 Aviation Industry Awards take place this Friday July 12th at the Clayton Hotel, Burlington Road, Dublin and it has been announced that Executive Vice Chairman & CEO of Dubai Duty Free, Colm McLoughlin, will be the 2019 recipient of the Outstanding Contribution to the Aviation Industry award.

Colm’s achievements are extraordinary: under his direction, Dubai Duty Free has become a retailing giant with annual sales turnover of US$2.015 billion in 2018 and is a recipient of 700 industry awards presented by international, regional and local entities, which bear testimony to its retail success. The retail operation covers over 38,000 square metres of retail space at Dubai International Airport and currently employs 6,200 staff, including 25 of its original 100 staff recruited in 1983. By the year 2020, it expects business to be in excess of US$3 billion a year, employing between 9,000 and 10,000 people.

Colm McLoughlin was born in Ballinasloe, Co. Galway, Ireland in 1943 and is one of five, with two elder brothers and two younger sisters. He attended the village Boy’s National School and Garbally College, where he excelled in sport including hurling and tennis and went on to play rugby for Co. Galway.

Colm began his retailing career in London in the 1960’s working for the popular high-street chain of Woolworths, before moving back to Ireland to work for Shannon Duty Free. As General Manager of Shannon Duty Free, Colm was one of a team of ten from Aer Rianta who moved to Dubai in 1983 at the request of the Dubai Government, to set up Dubai Duty Free.

Following the successful opening of Dubai Duty Free in 1983, Colm was asked to remain as General Manager of the start-up operation, which in its opening year had a turnover of US$20 million. Colm later became the Managing Director of Dubai Duty Free, which is one of the leading airport retailers in the world with sales turnover of US$2.015 billion in 2018. Employing over 6,000 staff, Dubai Duty Free is widely regarded for having set the benchmark for the duty free industry in the region. 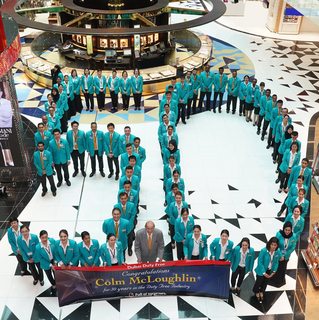 In July 2012, Dubai Duty Free successfully raised a US$1.75 billion loan facility to finance the expansion plans at Dubai International Airport. The facility received strong support from a syndicate of 26 international, regional and local banks. In 2013, a further facility for US$750 million was raised.

On a personal level, Colm McLoughlin has received many top awards which reflect his outstanding leadership qualities. These include the Frontier Lifetime Achievement award which was presented to Colm in 2004 by Frontier magazine, making him only the second person after Dr. Brendan O’ Regan, the founder of the airport duty free industry, to receive this accolade. In 2000, Colm was the first non-UAE National at the time to receive the Most Distinguished Employee Award from the Dubai Government Excellence Awards. In October 2014, Colm was presented with the Irish Presidential Distinguished Service Award for Business and Education category, making him one of a select group of people, and the first Irish person living in the UAE to be recognised by the Irish government for his outstanding contribution to Irish business and communities abroad. 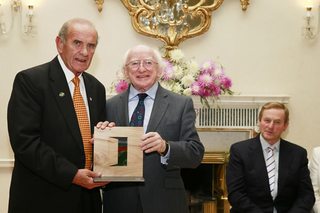 In 2017, Colm was presented with the “Lifetime Achievement Award” from CEO Middle East Award and the Gulf Business Award for “Retail Business Leader of the Year” for the second consecutive year. In addition, Colm was conferred with an Honorary Doctorate by the Middlesex University Dubai, for his contribution to UAE society and his outstanding service to the aviation sector as a key player in the region’s retail sector for 34 years.

In 2018, Colm was awarded with “Charity Champion of the Year” at the annual Duty Free News International Global Travel Awards for Travel Retail Excellence held in London. Colm was also named as one of the 50 Most Influential Expats in the UAE, in a list released by Forbes Middle East Magazine. Colm was also honoured with the “Lifetime Achievement Award” at The BURJ CEO Awards organised by CEO Clubs Network held in China and the MENAA “Best Business Leaders Award” for the third time in December.

A keen philanthropist, Colm established the Dubai Duty Free Foundation in 2004 and since then has supported 39 local and 52 overseas charities including Hand in Hand for Haiti, The Moodie Report Great Travel Retail Educathlon, Smile Train and the construction of 32 houses in the DDF GK Village, located in the province of Leyte, Philippines. Colm is married to Breeda and has three adult children and two grandchildren. His son lives in Dubai while his two daughters and grandchildren live in the UK.