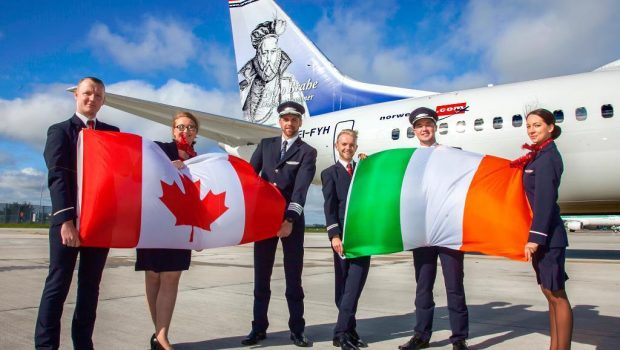 Norwegian have commenced a new service from Dublin to Toronto’s Hamilton John C. Munro International Airport. Flights will operate on Monday, Wednesday, Friday and Sunday using a Boeing 737-800. The route is the airline’s first-ever transatlantic service to Canada and the only direct flights between Ireland and Hamilton in Ontario. Hamilton Airport is located in the Greater Toronto area with good road links to major tourist attractions such as Niagara Falls.

Matthew Wood, SVP Commercial at Norwegian said: “We’re delighted to build on our popular services to the USA and offer Irish consumers another destination with our first-ever route from Dublin to Canada.

Sharon Murphy, Acting Manager at Tourism Hamilton said: “We can’t wait to introduce new travellers to Hamilton’s many tourist attractions and events. While the city is an affordable and ideally located alternative entry and departure point for international travellers in the busy south western Ontario travel hub – our fascinating, comeback city is also well worth a few days of exploration. Genuine and always welcoming, we’ve got breathtaking natural beauty including endless trails and waterfalls as well as a bustling and historic downtown core.”

With its B737-8 MAX aircraft grounded, Norwegian has temporarily leased an Airbus A330-300 (EC-MII) from Spanish Airline Evelop to operate daily flights between Dublin and New York Stewart. The service combines the Dublin to New York and Providence flights and bus transportation has been arranged for passengers travelling onward to Providence. Passengers who were due to fly from Cork and Shannon will be re-routed via Dublin until the end of June at least. Norwegian had said it would bus affected passengers to Dublin, but the airline is now advising passengers to book their own transport and to claim expenses by producing receipts. The airline has also said passengers can rebook flights or receive a refund.