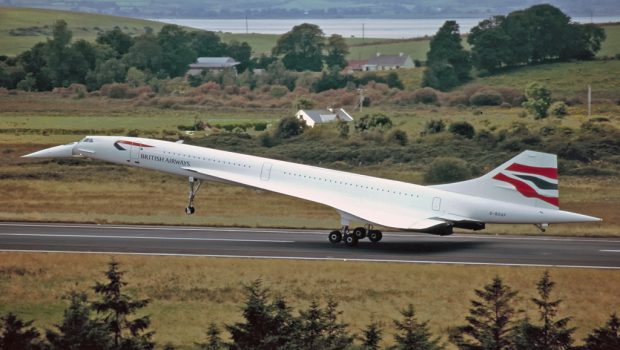 Image above of the last Concorde to visit Shannon on 22nd August 2001 for crew training prior to service re-entry following the fuel tank mods. Malcolm Nason.

On this day, in 1969, Concorde 001 made its first test flight from Toulouse flown by the legendary André Turcat. The second Concorde, 002, was built in the UK by BAC at FIlton and took to the air on 9th April of the same year flown by Brian Trubshaw. Scheduled flights began on 21st January 1976 on the London–Bahrain and Paris–Rio de Janeiro (via Dakar) routes, with BA flights using the Speedbird Concorde call sign with Air France using their normal call signs. The Paris-Caracas route (via Azores) began on 10th April.

The only thing that tells you that you’re moving is that occasionally when you’re flying over the subsonic aeroplanes you can see all these 747s 20,000 feet below you almost appearing to go backwards, I mean you are going 800 miles an hour or thereabouts faster than they are. The aeroplane was an absolute delight to fly, it handled beautifully. And remember we are talking about an aeroplane that was being designed in the late 1950s – mid 1960s. I think it’s absolutely amazing and here we are, now in the 21st century, and it remains unique.

BA and Air France were the main operators of Concorde but in 1977, British Airways and Singapore Airlines shared a Concorde for flights between London and Singapore International Airportat Paya Lebar via Bahrain. The aircraft, BA’s Concorde G-BOAD, was painted in Singapore Airlines livery on the port side and British Airways livery on the starboard side. The service was discontinued after three return flights because of noise complaints from the Malaysian government. From December 1978 to May 1980, Braniff International Airways leased 11 Concordes, five from Air France and six from British Airways. These were used on subsonic flights between Dallas-Fort Worth and Washington Dulles International Airport, flown by Braniff flight crews.

None of the Irish Airports ever featured on Concorde scheduled services but it did make occasional visits to the country for special events. The (official) first visit was to Dublin on 1st October 1983 to bring passengers to Paris for the Prix de l’Arc de Triomphe. According to news footage broadcast by RTÉ at the time; “Crowds of aviation enthusiasts flocked to Dublin Airport to see the Air France Concorde touch down on Irish soil for the first time. Flight AF4842 out of Dublin Airport was bound for Paris. On board the supersonic airline was a long list of VIPs including an ambassador, a Lord Mayor and government ministers.” 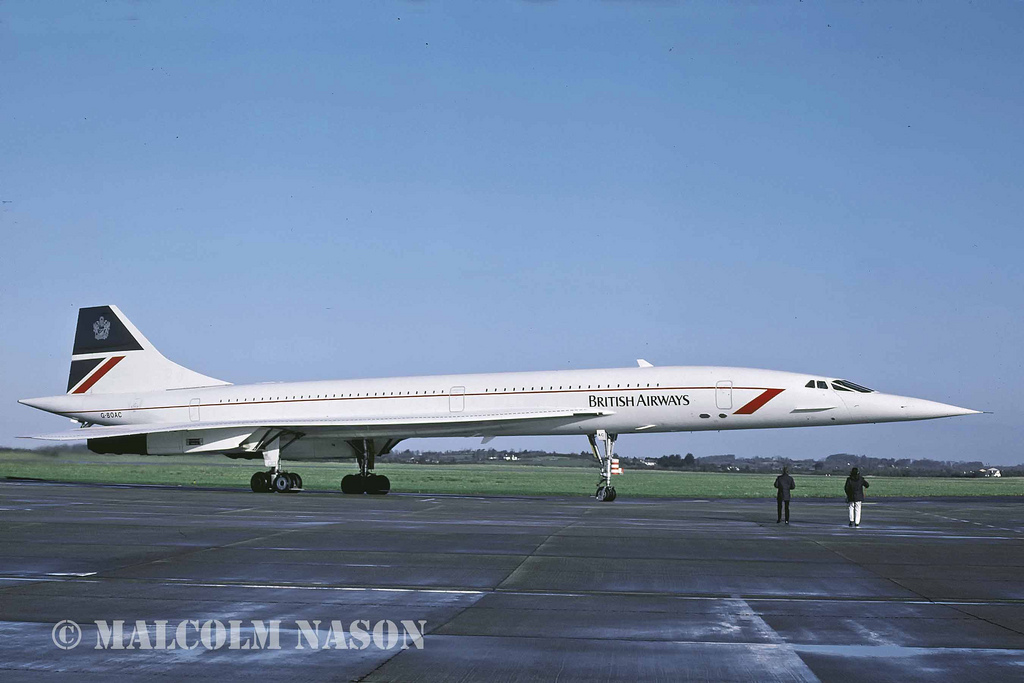 The Paris bound Concorde was bound for the Prix de l’Arc de Triomphe. The trip was organised by Air France and Executive Travel of Dawson Street in Dublin. Guests included French Ambassador to Ireland Jean Batbedat, Minister for Transport and Communications Jim Mitchell and Lord Mayor fo Dublin Michael Keating. Passengers paid £483 for the privilege of travelling on the supersonic flight to the races including a two-night stopover. 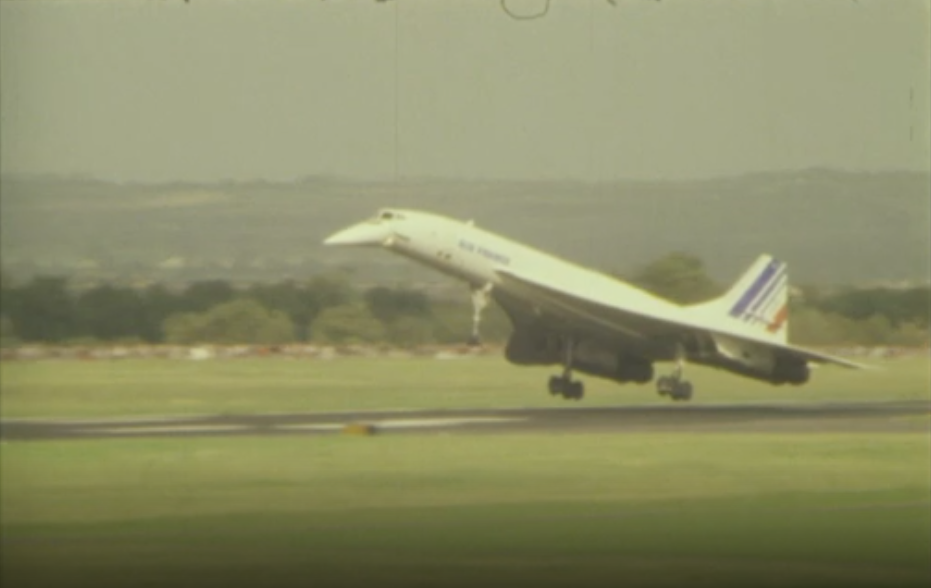 A screenshot from RTÉ footage of the first commercial visit of Concorde to Ireland on 1st October 1983. Click for video.

The reality is that Concorde visited Ireland on many occasions and even prior to entering commercial service. As part of the seven years of flight testing prior to certification, Concorde made a number of visits to Shannon. Its long runway and relatively low movements made it ideal for test flying and then crew training later on. There were several visits to Dublin too including the Pepsi promotional tour in 1996 and visits with the Ryder Cup team in 1995.

Concorde was painted in highly reflective white paint to avoid overheating during supersonic flight. This paint could reduce the airframe temperature during supersonic flight by about 6 to 11 degrees Celsius. In 1996, Air France Concorde F-BTSD was painted in the Pepsi blue colour scheme for a promotional world tour. In this colour scheme, Air France was advised to remain at Mach 2 for no more than 20 minutes at a time to avoid overheating. There was no restriction at speeds under Mach 1.7. F-BTSD was used because it was not scheduled for any long flights that required extended Mach 2 operations. 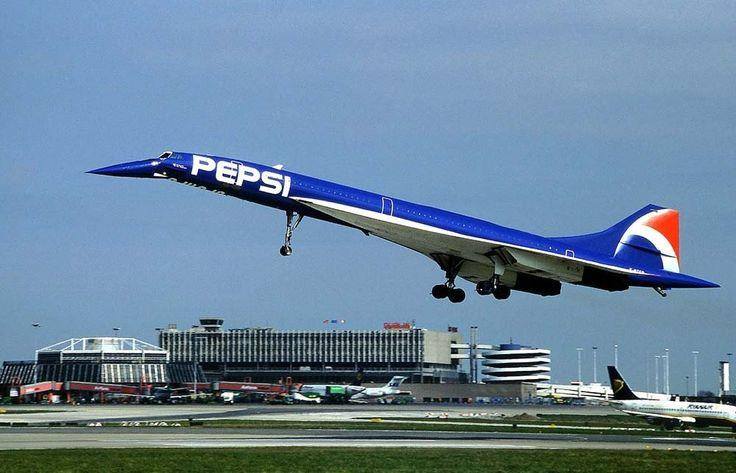 On 10 April 2003, Air France and British Airways simultaneously announced they would retire Concorde later that year. They cited low passenger numbers following the 25th July 2000 crash in Paris. The aircraft had also become expensive to operate with very little modernisation since its initial design. By its retirement, it was the last aircraft in the British Airways fleet that had a flight engineer. In a week of farewell flights around the United Kingdom, Concorde (G-BOAE) made its last visit to the island of Ireland visiting Belfast Aldergrove on 21st October 2003. 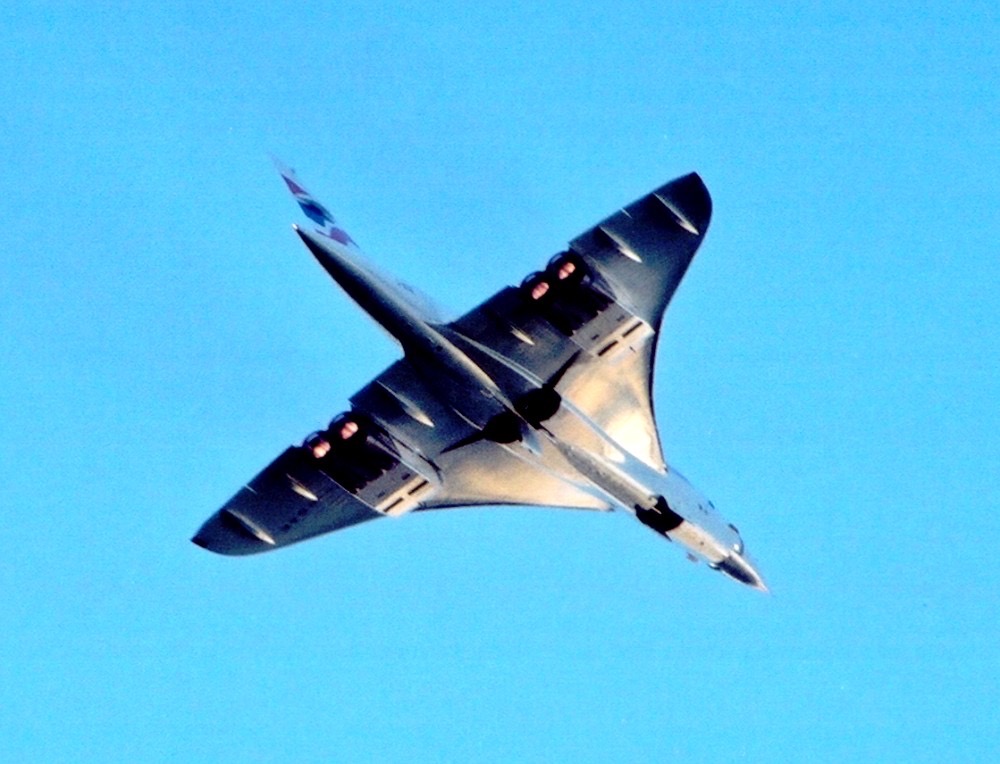 G-BOAE departs runway 07 in Aldergrove on its last visit to the Island of Ireland on 21st October 2003. Mark Dwyer 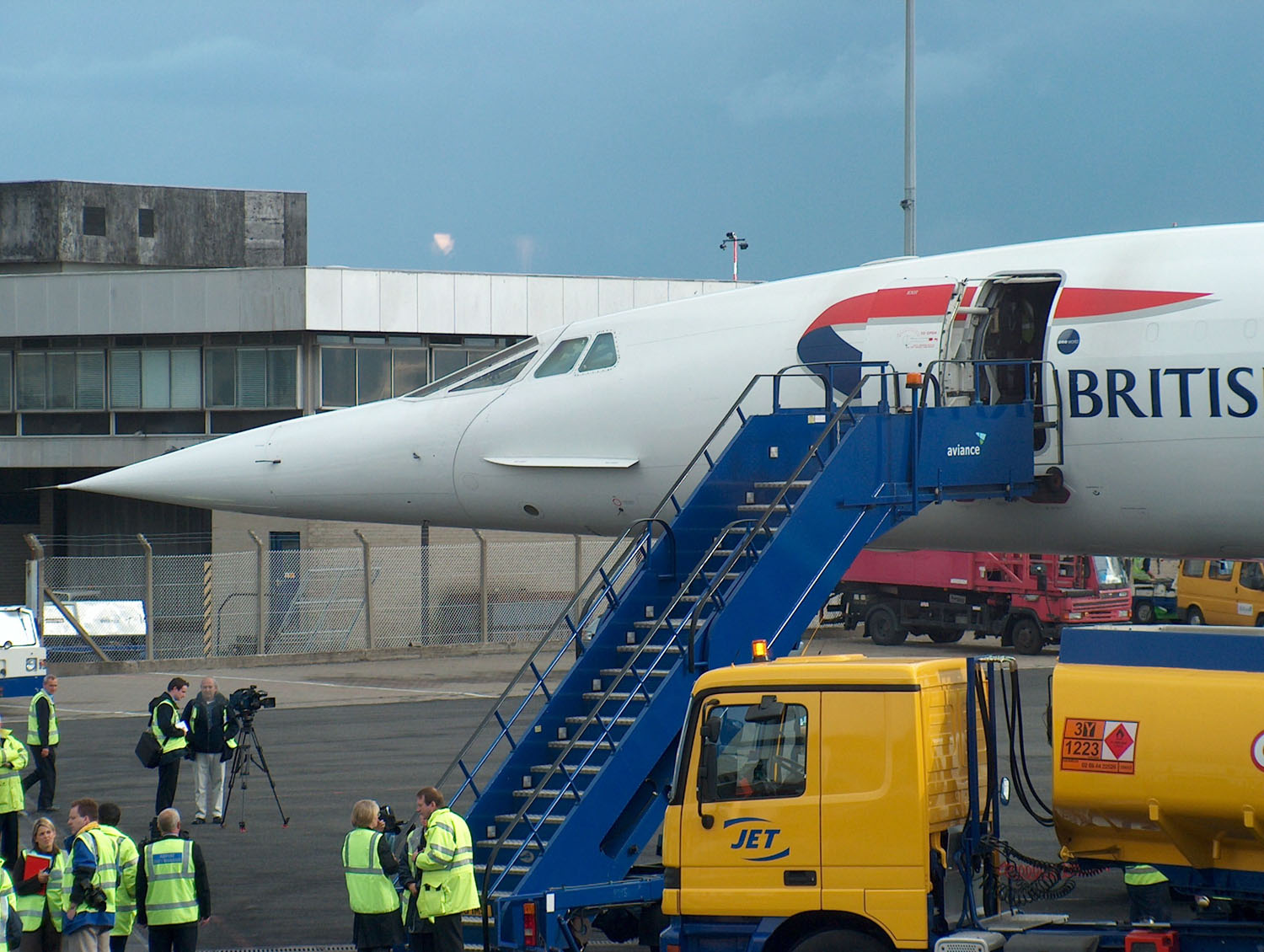 G-BOAE at Aldergrove during the farewell tour on its last visit to the Island of Ireland on 21st October 2003. Mark Dwyer 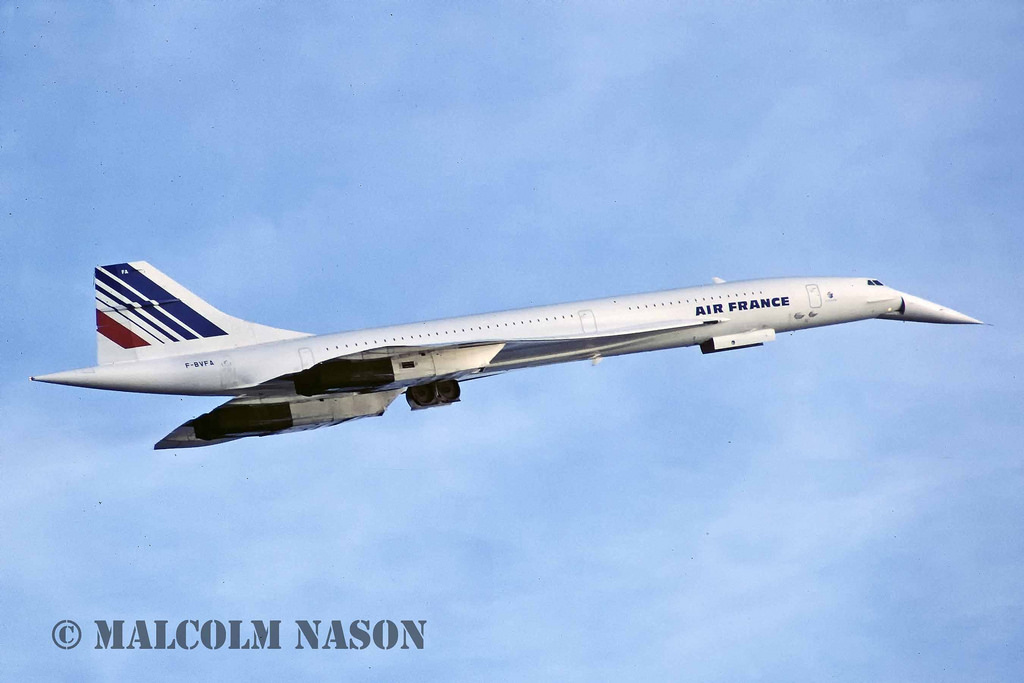 F-BVFA cleaning up after a touch & go while crew training at Shannon in 1987. Malcolm Nason. 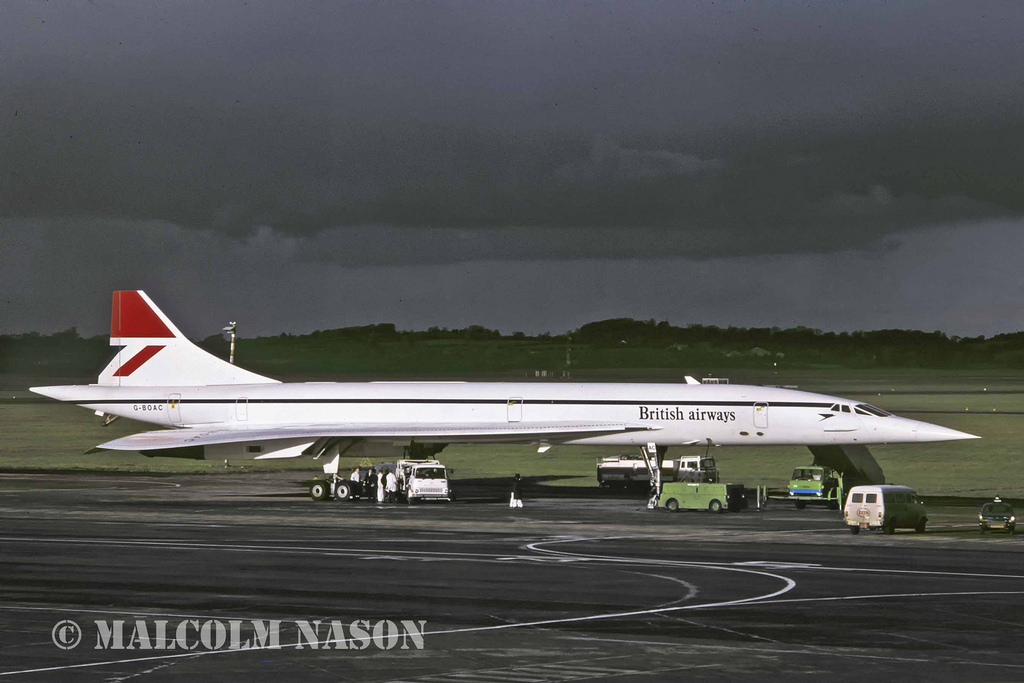 A blast of sun before the rain illuminates the Concorde on stand at Shannon in late 1976. Malcolm Nason. 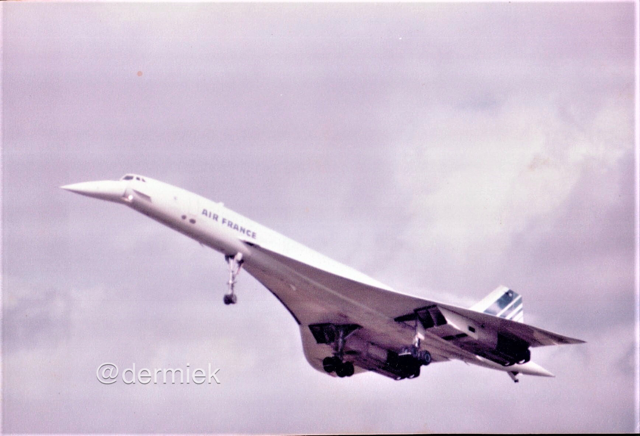 An Air France Concorde on approach to runway 24 in Dublin during the mid 1980’s. Dermot Keenan. 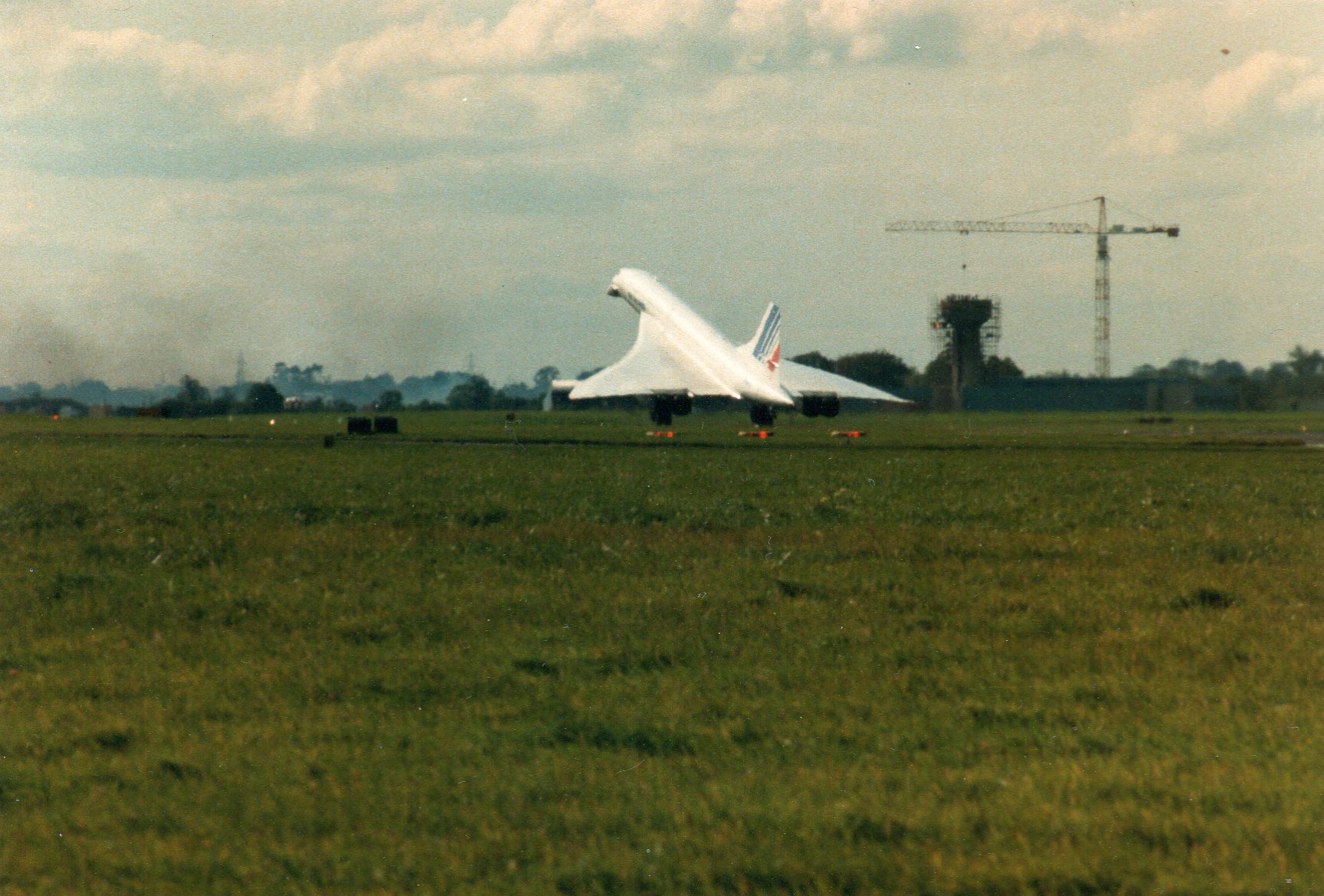 An Air France Concorde landing on runway 24 in Dublin during the mid 1980’s. You can see the current control tower under construction in the background. John Doyle. 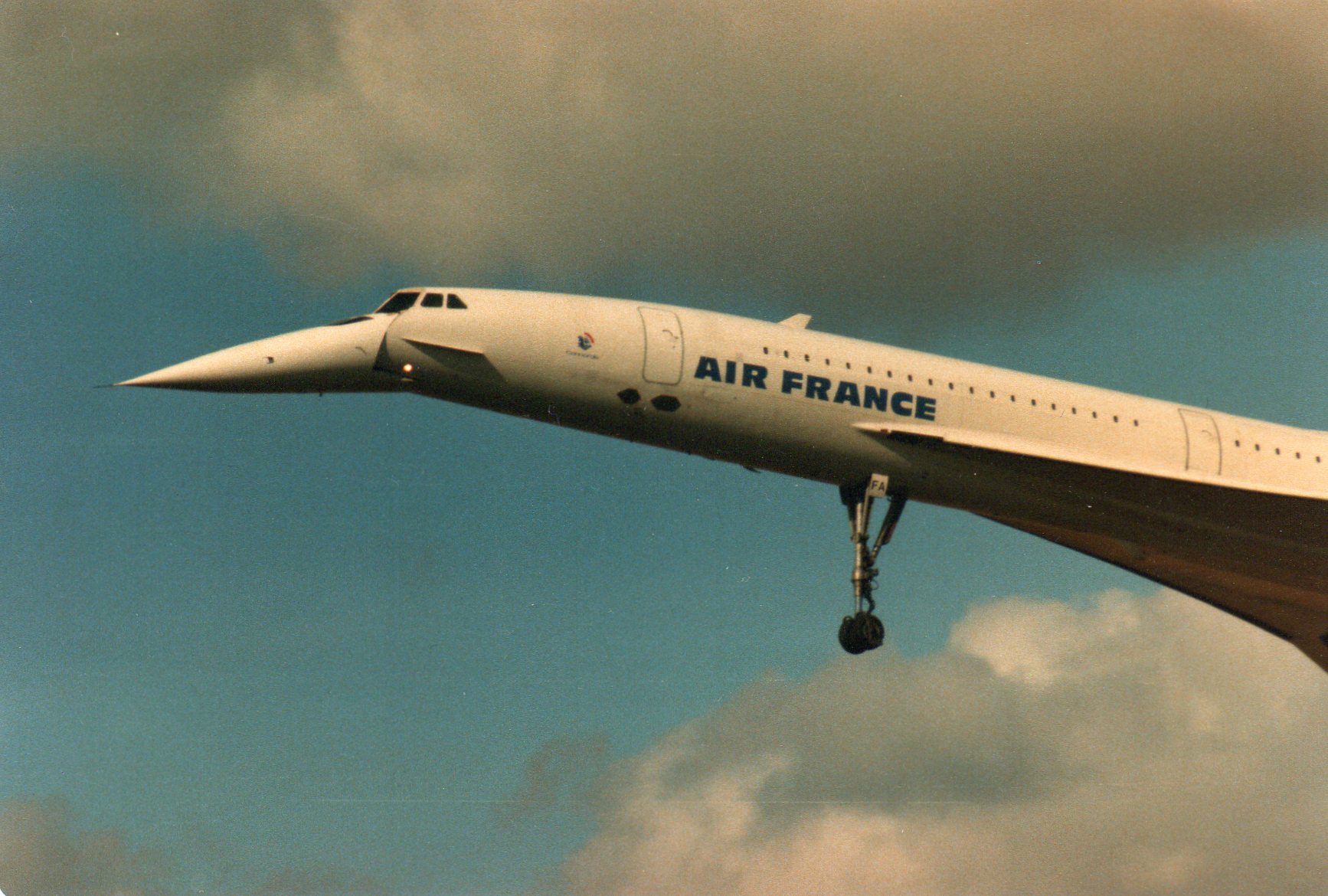 Approaching Dublin Airport during a visit in the mid 1980’s. Concorde is showing its unique drooping nose feature used for takeoff and landing. John Doyle 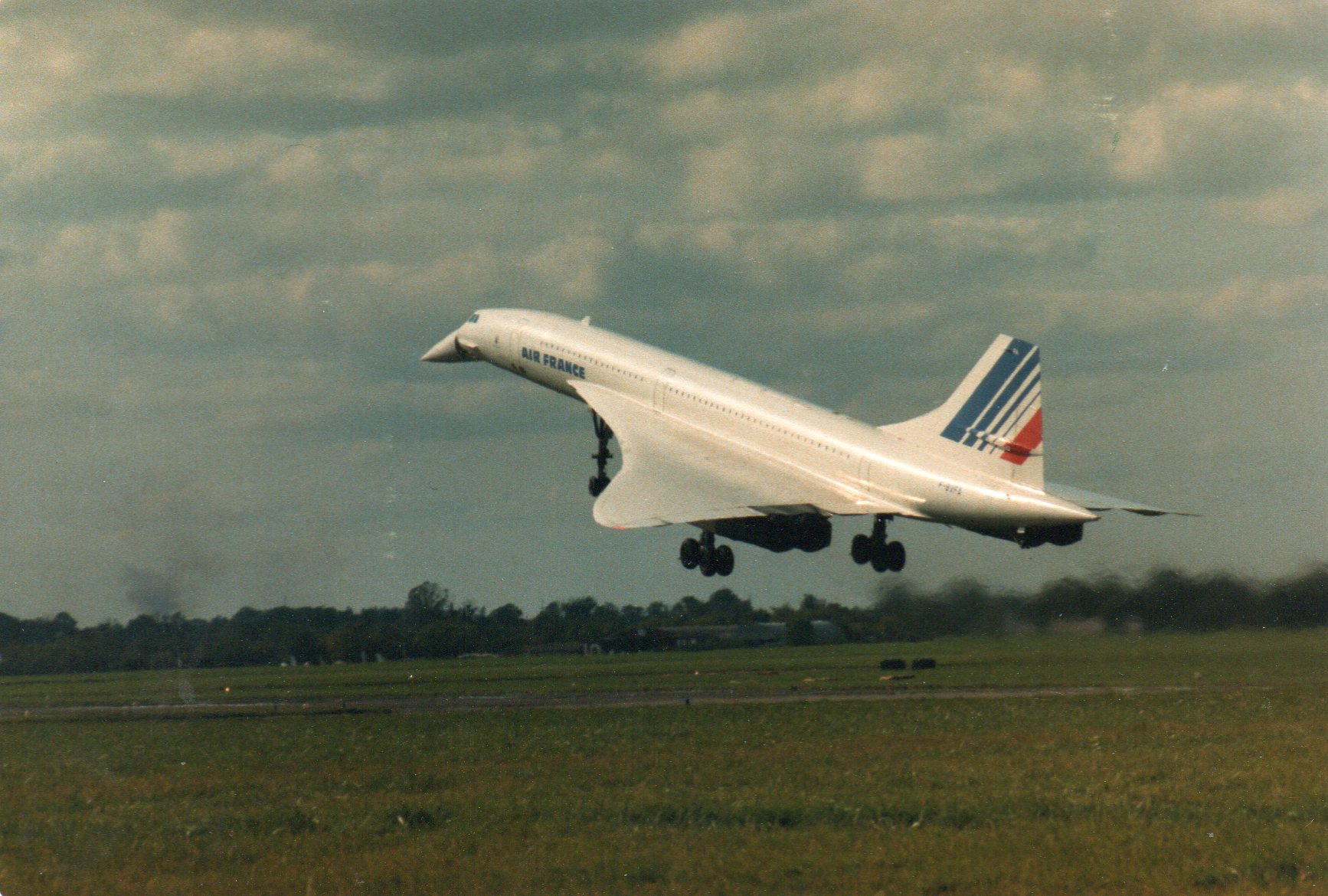