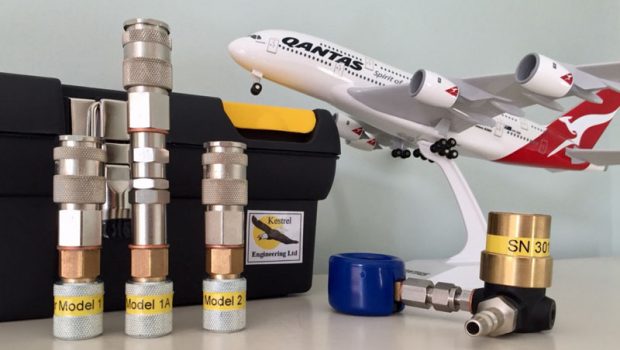 Dublin based Kestrel Engineering, have completed the delivery of 40 Auto-Deflat-Aer Kits to Qantas Airways Engineering in Sydney, Australia.  The new kit is a development of the original adjustable kit recently supplied to Singapore Airlines. It is preset in the factory to allow aircraft wheel assemblies to be deflated from operating pressure to 2 Barg (29 PSIG) for the purpose of storage or transportation. The kit also incorporates a unique tamper resistant feature to prevent unauthorised adjustment in the field.

The new kits will be based at Qantas’s home bases and also throughout the world. If you are operating in a major world airport there is every chance that a kit will be positioned there. The kits are available to be preset to reduce operational wheel pressures up to 290 PSIG to any reduced pressure in the range 5 to 100 PSIG. The Qantas kits are standardised at 29 PSIG which is the pressure recommended by Airbus. For example, the equivalent pressure recommended by Boeing is 50 PSIG. The kit can accommodate every wheel valve in the world and includes a special adapter for the A380 wheels.

Kestrel’s kits are used by over 50 airlines around the world. Qantas join a long list of customers including Aer Lingus, Dublin Aerospace, JetBlue, Emirates and Singapore Airlines.

End of the road for the Queen of the Skies →