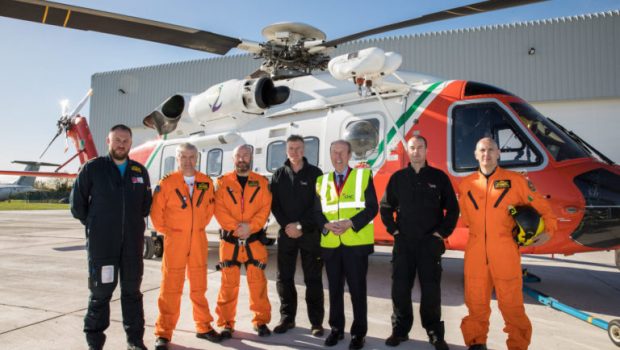 CHC Helicopters, operators of the Search and Rescue Helicopter Service for the Irish Coast Guard, has opened its new SAR facility at Dublin Airport. The official opening was attended by Minister for Transport, Tourism and Sport, Shane Ross TD, Karl Fessenden, President and CEO of CHC Helicopter and other guests. The event included a base and aircraft tour, a winching display and the unveiling of a commemorative plaque to mark the ceremony by Minister Ross.

Karl Fessenden, President and CEO of CHC commented “CHC has been providing search and rescue helicopter services in Ireland for nearly 20 years, and today’s opening of our new facility marks an important milestone for search and rescue (SAR) and CHC in Ireland. The improvements that have been made to the base will give our crews access to the best possible facilities to ensure that they can continue to deliver their vital, life-saving work. The size and scale of this new state-of-the-art facility – which includes additional office space, enhanced living accommodations and a new, modern hangar for engineering – reflects our continued commitment to providing SAR to the people of Ireland. Lastly, I would like to pay tribute to the outstanding work that our staff at CHC Ireland, both past and present, has carried out over many decades, and this new facility will ensure that their legacy is continued.”

Minister Ross acknowledged the outstanding work of the Coast Guard and the particular contribution of CHC staff in providing a 24/7 365 Search and Rescue (SAR) helicopter service in Ireland “This new facility at Dublin Airport is testimony to CHC’s commitment to delivering the best possible service for the Coast Guard and ultimately the people who count on that service here in Ireland. The entire team here at CHC – from support staff, engineers, rear crew and pilots – deserve our thanks and should be proud of their continued contribution to delivering this vital service.”

Pat Pearse, CHC Ireland General Operations Manager, explained “We are extremely proud to fly upwards of 1,000 search-and-rescue missions each year in Ireland that helps save hundreds of people. Our crews are dedicated to ensuring that anyone who finds themselves in a position where air rescue is needed has a chance of survival, and these enhancements to the base will enable the team to continue to deliver a world class service that we can continue to be proud of.”

The company also released this timelapse video of the construction of the facility between August 2017 and October 2018.