George Best Belfast City Airport has announced a £15 million infrastructure investment that will include a major upgrade of its departure lounge, incorporating its retail, food and beverage offering. The investment also includes an upgrade of the airport’s central security area and hold baggage screening facilities, as well as the purchase of a new fleet of Airport Fire appliances.

The completed works will be contained within the current terminal building and will be completed by October 2018. Brian Ambrose, Chief Executive of Belfast City Airport, said “In keeping with our overall mission of delivering an airport experience that exceeds our customers’ expectations, Belfast City Airport is fully committed to continually improving the overall journey for our passengers. The £15m investment in our infrastructure is another major reinforcement of our commitment.

Niall Gibbons, CEO of Tourism Ireland, commented “This investment is excellent news for Belfast and for tourism to Northern Ireland. As an island, direct, convenient and competitive air access is critical to delivering growth in inbound tourism and any improvement in the experience of our overseas visitors, including travelling through our airports, is very much welcomed.

“Tourism Ireland is committed to working with all of our airports and airline partners to maximise opportunities for new and existing flights, helping to deliver further growth in overseas visitor numbers.”

Air Seats Available down 10% in NI this Winter

The 2017/18 winter season is estimated to see a +3% increase in direct, one-way air seats available per week to the island of Ireland, when compared to last winter with just over 430,000 one-way weekly seats available, the largest amount since the winter period of 2008/09 (when 440,000 were available), with growth in seat capacity from North America, the Middle East and key European markets.

Republic of Ireland is estimated to see a 7% increase in air seats available. However, Northern Ireland is forecast to experience a 10% decline, primarily driven by the reduced frequency of British Airways’ Heathrow-Belfast City service, and the winter suspension of Ryanair’s London-Belfast International service from Gatwick.

Compounding this was the decision by Air Iceland Connect (part of the Icelandair Group) to terminate its services between Belfast and Reykjavik on 15th May. A statement from the company said “Icelandair regrets to announce that the airline’s direct flight service to Reykjavik from Belfast will be suspended from 15 May 2018 due to commercial reasons.” Services only commenced on the route on 1st June 2017.

The statement added “We are sorry for any inconvenience caused with these changes. Icelandair continues to operate frequent services to London Heathrow, London Gatwick, Manchester and Glasgow in the UK, and has a direct scheduled flight to Dublin, Ireland, starting from 8 May 2018 and operating six times a week, year round.

“Customers due to travel after 15 May have the options of travelling to Reykjavik from Dublin, changing the date of travel or receiving a full refund.” 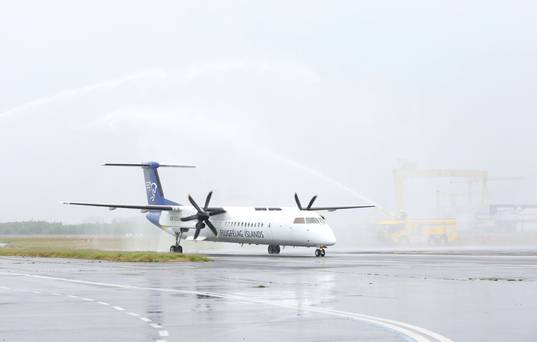 The arrival of the first Air Iceland Connect Flight on 1st June 2017.