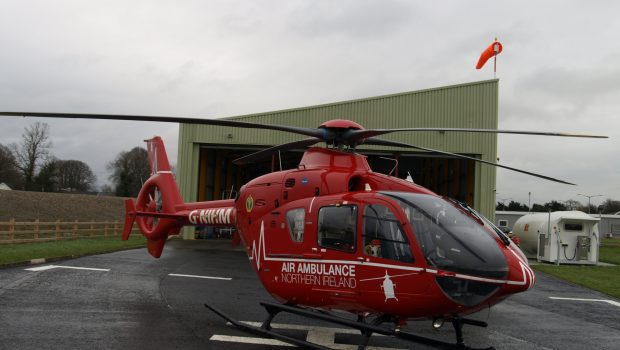 The most recent addition to the operations based at the sprawling Maze Long Kesh (MLK) site in Co Antrim is Air Ambulance Northern Ireland (AANI). The service carried out its first life-saving mission on 22nd July 2017, while the helicopter and crew were on a training flight before the formal launch date a few days later. An eleven year old boy was doing some work on the family farm when he suffered a serious head injury in a tractor accident. A road ambulance crew arrived and, in a piece of very appropriate quick thinking, AANI was contacted, who confirmed that they were available and had the necessary skills and equipment on board.  Within minutes, the AANI doctor and paramedic were providing treatment at the site of Conor’s injury. Once he was stabilised, the patient was airlifted to Belfast in an eight-minute flight, covering a distance that would have taken nearly an hour by road. The prompt response from the pilot and the doctor-paramedic crew had significantly reduced the long term potential effects of the injury. Conor spent seven days in hospital and has made a full recovery. 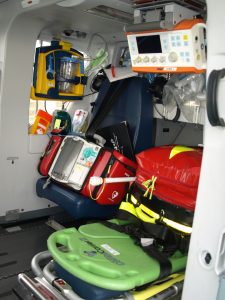 Northern Ireland has a population of about 1.8 million people across an area of approximately 14,000 square kilometres. The need to provide a fully effective and integrated road and air response emergency medical system has been apparent for years and has been subject to several false starts. At last one has now been provided. AANI currently operates from 7am to 7pm, 365 days of the year and has so far carried out more than 140 HEMS (Helicopter Emergency Medical Service) missions, which equates to more than one per day. The goal is to ‘bring the skills of a hospital Accident and Emergency Department (A&E) to the scene of major trauma’, be it a road traffic or agricultural accident, a shooting, stabbing or a fall from height. Any part of Northern Ireland can be reached in half an hour. It is not there to convey patients to hospital who have suffered a heart attack or stroke. Nor is it involved in the delivery of organs for transplant. Air Ambulance to and from Great Britain is handled by Woodgate Aviation at Belfast International Airport. The Irish Coast Guard’s helicopters are regular visitors to Northern Ireland to carry out search and rescue but whose aircrews are also trained to Pre-Hospital Emergency Care Council (PHECC) paramedic standards. Cross-border tasking for the AANI would be a possibility should a major incident require it. 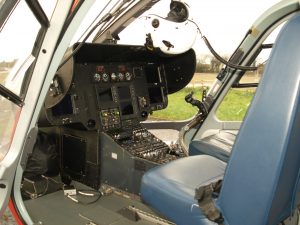 The first notification of an incident in Northern Ireland requiring the assistance of AANI could be a call from a road ambulance crew at the scene or, alternatively, the helicopter crew can self-task, based on information received from the Air Desk at MLK, which is manned by a paramedic and monitors all 999 calls. The Air Desk can also speak to the operator at the Ambulance Control Centre, Knockbracken, if further clarification is required. The decision to launch the helicopter is based on the severity of the accident and the prevailing weather conditions. If it not possible to fly owing to bad weather, there is a rapid response vehicle on-site with the same medical equipment, which can also be used to get to the scene of an incident. There is currently a limited night capacity and some night familiarisation training is being carried out. The provision of a round-the-clock service is an aspiration but would have cost implications with regard to Night Vision Goggles (NVG) and a NVG compatible cockpit. On a daylight HEMS mission the pilot will select the landing site, which could be anywhere, provided that it confirms to the minimum safety dimensions. Close liaison is maintained with the PSNI, for example in a couple of cases where the A1 had to be closed to traffic on a Friday rush hour to allow the AANI to land as close as possible to the injured, so saving much critical time. In cases of need the helicopter can land after dark on known and prepared Helicopter Landing Sites (HLS) but not on ad-hoc sites. 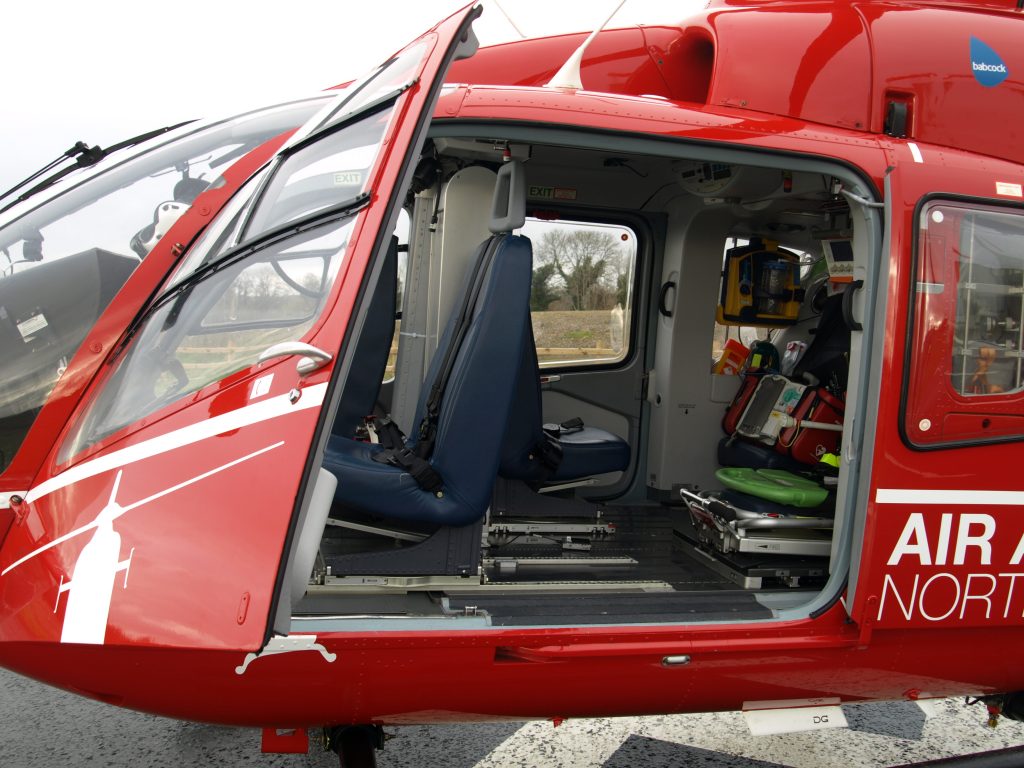 One of the advantages of MLK as opposed to lodging at either Belfast International Airport (BFS) or George Best Belfast City Airport (BHD) is that the helicopter can get airborne very quickly ‘without waiting for an EasyJet or Flybe.’ Senior Pilot for the service, David O’Toole praises the co-operation of air traffic control at both airports highly, ‘they try their very best and more often than not succeed in meeting our rapid response airspace needs.’ He is also very grateful for the excellent attitude of their neighbours, who live around the airfield’s perimeter; there have been no noise complaints. There are two pilots allocated to the operation; David and Richard Steele, who work back-to-back on a pattern of 12 hour shifts, four days on and four days off. Between them they have nearly 40 years of flying experience. David previously flew with the Irish Air Corps fulfilling various roles including Chief Flying Instructor of 302 Squadron (Helicopter Flying School), Chief Helicopter Pilot in an Garda Siochana’s (Police) Air Support Unit and then subsequently flying Offshore in support of the Oil and Gas industry on the North Sea before transitioning to this newly established service. Richard has accumulated 17 years flying experience and has worked in both corporate and air ambulance operations, having recently transitioned from The Midlands Air Ambulance Service, where he flew for nearly 7 years from their base at RAF Cosford. David describes it as an enjoyable, challenging and rewarding job, though not without hazard. ‘There seems to be an increasing amount of wind turbines in Northern Ireland, not all of which are marked on our aviation maps. The very changeable weather and the topography of the Province are both quite challenging. When you are called on a mission the work rate is at a high tempo and the adrenalin starts to flow. The human instinct to save life is a very strong motivating factor. You have to slow yourself down, particularly when you are landing somewhere that is unfamiliar – you really don’t want to bring an extra three casualties to the scene. Knowing when to say ‘no this is just not possible’ is an essential skill, particularly in marginal weather conditions.’ 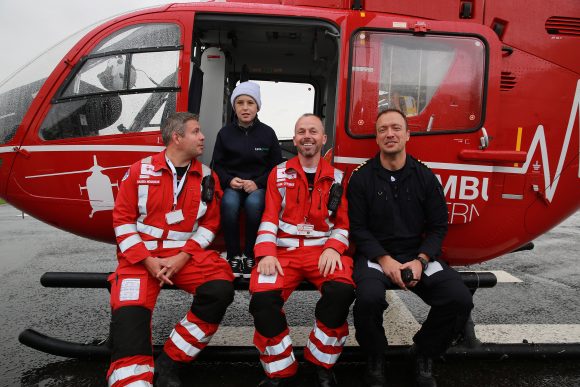 The core team on board consists of one pilot, a doctor (who will be a consultant in A&E, Intensive Care or Anaesthetics) and a highly-trained paramedic. The paramedic sits in the front left-hand seat beside the pilot and will have undertaken an aviation course in order to give the pilot assistance with navigation, flight checklists and the avoidance of collisions. The paramedic is officially designated as a member of the aircrew by EASA, and this permits the aircraft to operate under certain exemptions from SERA (The Standardised European Rules of the Air). Currently 14 doctors and seven paramedics are retained, with one doctor and a paramedic making up the operational crew with another paramedic covering the Airdesk . The paramedics are seconded on a full time basis and the Doctors work on average once every 10 days on the service. As well as having the most appropriate and skilled practitioners on hand, the helicopter is equipped with a comprehensive medical fit. The Helicopter carries additional medical equipment that would normally only be found in hospital. The helicopter is bringing the resuscitation room to the patient. 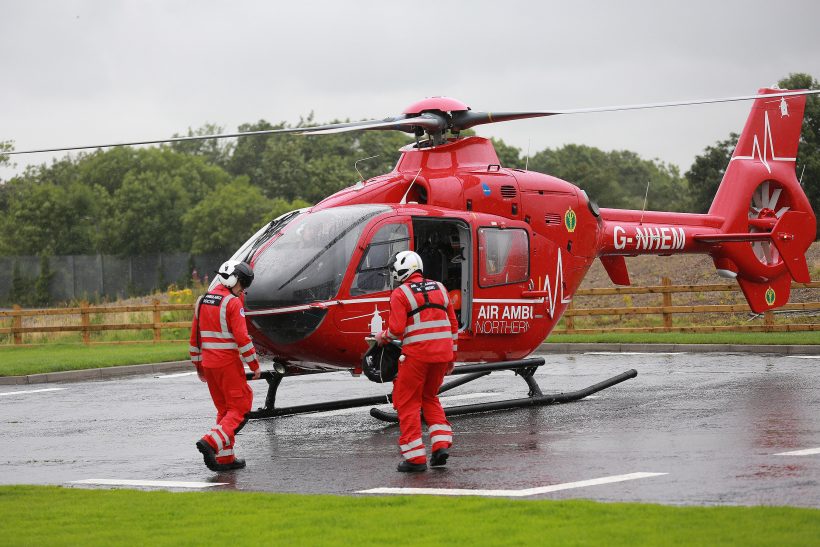 Two helicopters are used by AANI, one on-site at MLK, the other held in reserve at St Angelo Airfield, Enniskillen. G-NIHM is a Eurocopter EC-135T2+ and G-NHEM is an EC-135T2. Both helicopters and the pilots are supplied under contract by Babcock Mission Critical Services Onshore Ltd, the leading provider of HEMS in the UK, which is based at Staverton Airport in Gloucestershire. It was originally Bond Air Services and under this name first employed Prince William as an air ambulance pilot, operating from Cambridge Airport. Staverton is also the location of the company’s EC-135 simulator, on which all of Babcock’s pilots undertake mandatory refresher training every six months. Both helicopters have recently been upgraded by the installation of a Garmin GTN750 fully integrated GPS/NAV/COMMS system, which also includes flight planning, terrain mapping, traffic awareness system and weather radar modes, leading to greatly enhanced situational awareness, all of which enhances the service given and also the safety of the crew.

Maintenance of the two helicopters is carried out in the hangar at MLK (which used to be the primary vehicle search building and, once a large roller door was installed, is an excellent facility). The base engineer is Martin Regan, who served in the Irish Air Corps for many years and therefore has experience of a wide range of aircraft, particularly the EC-135. MLK is officially a Line Station and can carry out periodic inspections up to 500 hours. With two helicopters available there is adequate cover for maintenance down time. Martin can also call over for engineering support from Staverton when he needs it. 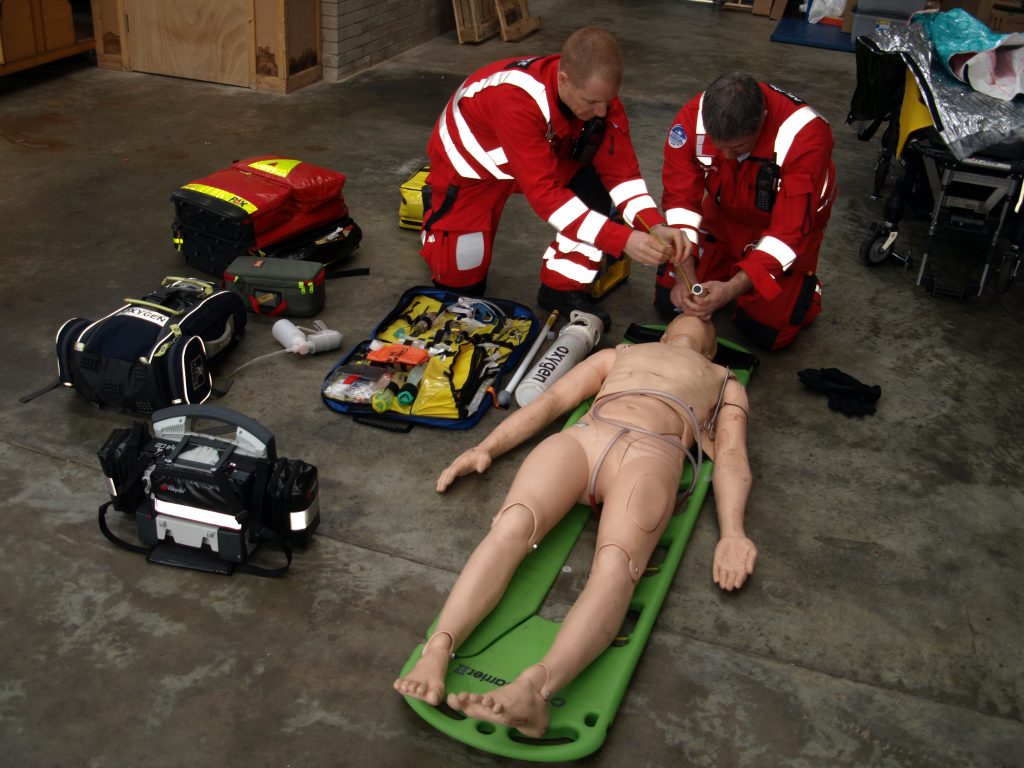 This excellent new service costs a considerable amount of money, in the region of £2 million per year. AANI is the charity that fundraises for and manages the operation.  It works in partnership with the Northern Ireland Ambulance Service and the local Health Trusts which provide and pay the salaries of the on-board medical teams, as well as supplying the medical equipment. There are five trustees and three full-time staff, who are also based at MLK, a Chief Executive Officer, the Head of Public Relations and Fund Raising and an administrator. Currently four local fund raising officers are in process of being appointed.

In March 2016 HM Treasury approved a substantial grant to AANI that was subject to match funding, allowing a tender process to be begun which was secured by Babcock on three-year contract. Having evaluated several sites MLK was selected as the base. AANI signed a Memorandum of Understanding with the Northern Ireland Ambulance Service in November 2016, which outlined how the HEMS service would be delivered. With the service now a certainty, the trustees felt it appropriate to start accepting the charity donations being offered to support the continued development of the Air Ambulance service. From the very first donation of £200, the Charity has been overwhelmed with the support from the general public, community groups, sports clubs and businesses.

Now that Northern Ireland’s first HEMS service is up and running, and has also given ample proof of its requirement and utility over the last few months, it needs the support of everyone in the Province to ensure that it will continue to save lives on a daily basis.

The author would like to thank the AANI for its help with this article.

February was Another Busy Month for the ICRR →