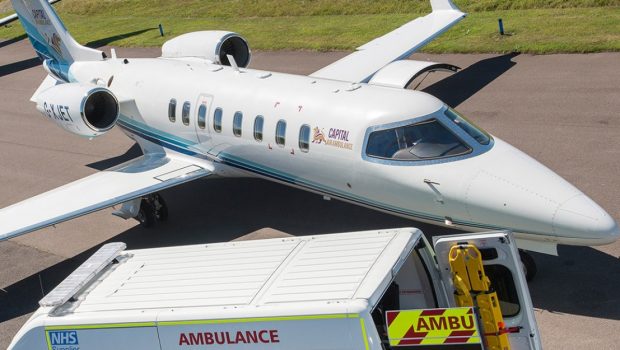 Capital Air Ambulance, a UK based Air Ambulance company has been awarded a contract by the Health Service Executive (HSE) for patients who need transport at night to another country for life-saving transplants. Most of the patients involved are children, who need to go to the UK within eight hours, for heart or liver transplants, an average of five cases a year since 2012.

A report published from the health watchdog HIQA (read here), says there has been no dedicated air ambulance service in Ireland for so-called ‘Priority 1’ transfers. Transfers have mainly been provided by the Air Corps or the Irish Coast Guard. However, HIQA said that since 5th November, neither the Air Corps, nor the Coast Guard were available to carry out night-time transfers, due to capacity or regulatory requirements. The Air Corps continue to be available from 07:30 to 19:00. However, between 2012 and October 2017, 75% of all Priority 1 transfers were conducted between 7.00pm and 7.00am

The preferred long-term option is likely to be based around either the Irish Coast Guard or the Air Corps. The Irish Coast Guard could incorporate provision of an additional aircraft and aircrew with a primary remit to provide air ambulance services to be included in the next contract, potentially in 2022. The Air Corps could be engaged either through the provision of an air ambulance service on an “as available” basis or through a GASU-type model with the Air Corps providing a dedicated air crew to operate aircraft provided by the HSE. The Air Corps options leverage existing state resources and are contingent on restoration of sufficient staff capacity.

Squawk 7000 – Transition Students get a socially distanced introduction to aviation →