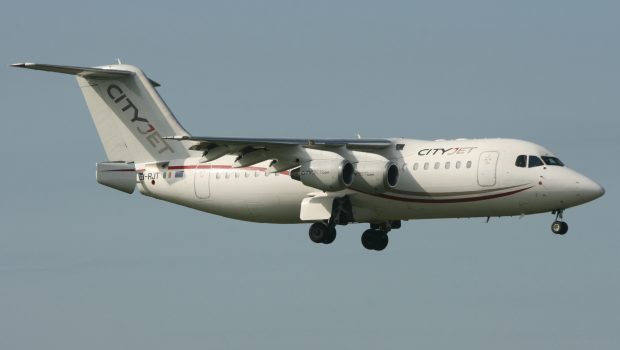 Cityjet CEO and Executive Chairman Pat Byrne has said the airline plans to retire their fleet of Avro RJ85 aircraft by 2019 or 2020 “but probably ’19”. The airline currently have 14 of the type left and expect to retire four by the end of 2017 and three in 2018. EI-RJC was cancelled last week on 29th November to the UK as G-CEHA. It was noted stored at Cranfield and is expected to be withdrawn from use. The RJ85 will continue to be the backbone of the Cityjet fleet for the next 2 years or so until the Sukhou SSJ100 Superjet gains certification for operation into London City.

London City Airport is a major destination for CityJet, but its steep 5.5° approach requires new control laws, wing flap setting and modified brakes for the SSJ100. Test flights are expected to begin this month, certification is planned for 2018, and the modified aircraft will be available in 2019. A new winglet, helping takeoff and landing performance and delivering 3% better fuel burn, will be standard and available for retrofit. CityJet’s SSJ100’s will likely remain in the lease and charter markets until then.

The airline recently added a fourth Sukhoi SSJ-100 to its wet leasing service for Brussels Airlines joining EI-FWD, EI-FWE and EI-FWF that already operate for the airline.

It will probably add back seasonal London City routes to Florence, Avignon and Toulon in summer 2018 with RJ85 aircraft. CityJet is in talks with Air France to extend an existing agreement to operate flights out of Paris on behalf of the larger carrier. An existing agreement to operate six routes from Paris for Air France, including one to Dublin, expires next March. CityJet serves Dublin, Dusseldorf, Newcastle, Stuttgart, Turin and Hanover from Paris Charles de Gaulle airport, where it has four aircraft.