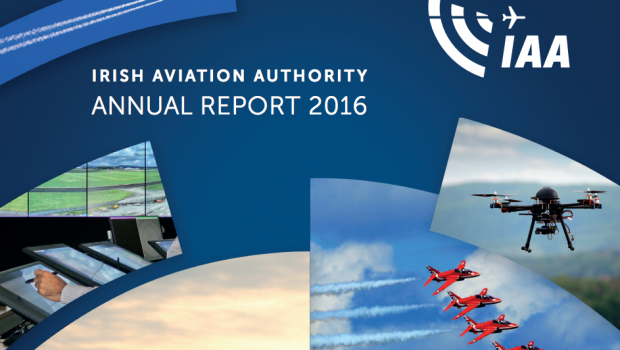 The Irish Aviation Authority (IAA) has reported a 18.3% rise in operating profits to €39.5 million on a turnover of €191.9 million in 2016. In line with this improvement, the IAA also announced the payment of a €9.2 million dividend to the State shareholder, an increase of 24.3% over last year. This equates to 30% of profit after tax.

The IAA is responsible for the provision of Air Traffic Management (ATM) in Irish controlled airspace (covering some 451,000 square km), aeronautical communications on the North Atlantic, and the security oversight and safety regulation of the civil aviation industry in Ireland

The IAA receives no operational or capital funding from the State. Its revenues are generated through charges and fees from the aviation industry, which are amongst the lowest in Europe.

Eamonn Brennan, IAA Chief Executive said, “I am very pleased with our 2016 results and I want to take the opportunity to thank all our staff for their role in achieving this very strong and consistent performance. Investments in technology and our continuing high performance and efficiency programme ensure that we can maintain our position as a leading aviation regulator and service provider.”

Traffic at Irish State airports and through Irish controlled airspace increased by over 8% and the IAA safely managed just over 1.1 million flights last year.

“Safety is our number one priority. We are independently audited by the European Aviation Safety Agency (EASA) and the International Civil Aviation Organisation (ICAO) and I am pleased to report that we continue to be recognised as having one of the leading jurisdictions for oversight in Europe and the world. Furthermore, in November 2016, the IAA was in first position out of 47 States for the EUROCONTROL CANSO Standard of Excellence survey in Safety Management Systems and maturity measurement,” added Mr. Brennan.

During 2016, the IAA begun a Remote Tower trials. From June to August 2016, the IAA worked to validate the system through operational trials, which tested the bounds of remote tower technology. Trials started with low volume traffic levels to emulate night time operations at Shannon and Cork. Traffic levels were then progressively increased throughout the trials to investigate the level of air traffic that can be safely handled. These trial validated single controller operation of multiple remote towers in a live air traffic environment. See here for more details.

A copy of the Annual Report 2016 can be accessed here.