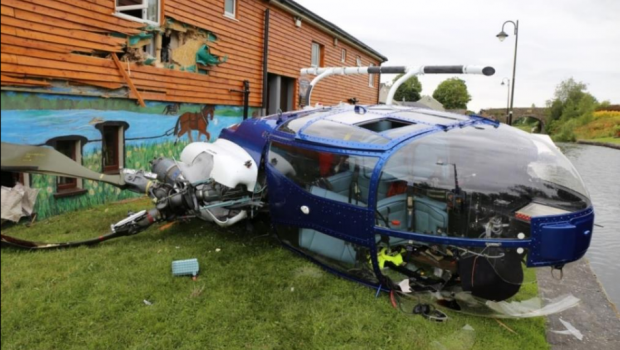 Report into helicopter crash in Abbeyshrule

The AAIU have published the report into the accident involving Westland Gazelle HT Mk.3 (SA 341), G-BXTH, in Abbeyshrule village which happened on 15th July 2015. While attempting to land on a canal bank adjacent to a restaurant/guesthouse in Abbeyshrule, Co. Longford, the main rotor blades of the helicopter made contact with a timber-clad wall of the building. This caused the tail of the helicopter to swing rapidly towards the wall and collide with it. The tail boom separated from the helicopter, broke apart, and came to rest in the canal. The helicopter rolled to the right and impacted with the canal bank. Debris was scattered over a large area of the canal and its bank. There was no fire. The Pilot and Passenger evacuated the helicopter and were uninjured. One person, who was in the building at the time of the event, received minor injuries. 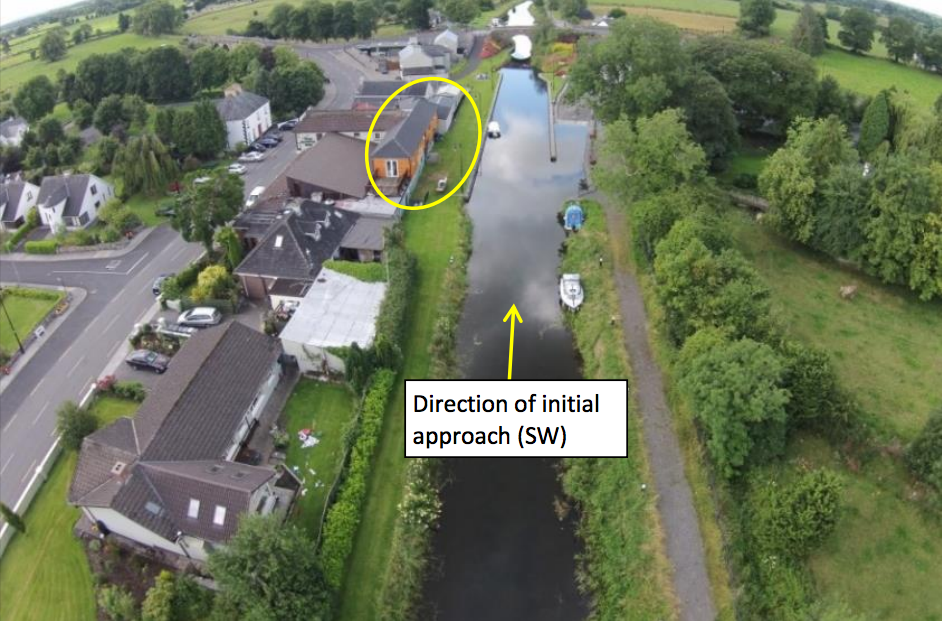 As the helicopter was being manoeuvred to align it parallel to the canal bank and the wall of the building (on a north easterly heading), while at the same time descending and moving closer to the building wall, the main rotor blades made contact with the timber-clad section of the wall. This caused the tail of the helicopter to swing rapidly towards the wall and collide with it. The helicopter rolled to the right and impacted the canal bank, breaking the right hand cockpit canopy. The main rotor blades, although badly damaged, remained attached to the rotor hub. Debris was scattered over the canal and the canal bank adjacent to the building. The Pilot and Passenger evacuated the helicopter through the broken cockpit canopy. Emergency services arrived shortly thereafter. Neither occupant reported injuries. There was no fire.

Mobile phone video footage and CCTV recordings (see below) provided to the Investigation showed the attempted landing, the collision and the onlookers.

The helicopter, a Gazelle HT Mk.3 (SA 341), was manufactured in 1973 by Aérospatiale through a joint production agreement with Westland Helicopter. It was fitted with a single Turbomeca Astazou IIIN2 gas turbine engine, which powered a three-blade composite main rotor and a Fenestron tail rotor. It was initially operated as a military helicopter, before being placed on the civil register as G-BXTH in 1998. 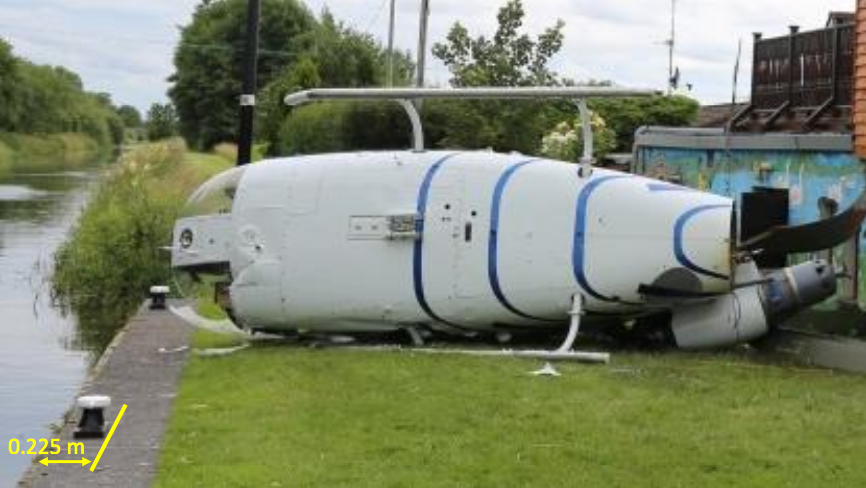 At the site of the attempted landing, the canal bank from the edge of the bank to the lower part of the wall of the adjacent restaurant/guesthouse was 7.38 m wide. The depth of the timber cladding on the upper part of the wall was 0.075 m. The eave and gutter of the building extended over the canal bank by approximately 0.275 m. The site was framed by two lamp posts 24.7 m apart. Mooring bollards were fitted to the paving strip on the edge of the canal bank. The inner edges of the bollard mounting plates were approximately 0.225 m from the edge of the canal bank. In the latter stages of the attempted landing, the Pilot was trying to ensure that the left hand landing skid of the helicopter was clear of the mooring bollards, while at the same time trying to maintain adequate blade tip clearance between the main rotor blades and the wall of the building. If the helicopter was positioned with the left hand skid just touching the inside edge of the bollard mounting plate, the maximum clearance available, between the main rotor blades and the timber-clad section of the wall of the building, would have been 0.81 m (810 mm), excluding the overhang of the eave and gutter

The report has 13 findings the most significant of which were;

The investigation makes no safety recommendations. Photos from the AAIU report. Read the full report here.