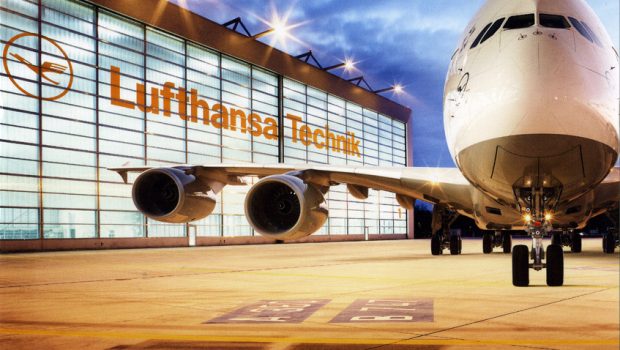 Having enjoyed numerous enthusiast group visits to aviation facilities, one beacon of aircraft maintenance had eluded us. Always on our radar but never quite committed to a visit, Lufthansa Technik Hamburg soon to wind-up commercial airliner maintenance operations, finally it was now or never. The chance to travel to one of the largest and most prestigious organisations of its type was here. Contact was made, permission granted, a trip was on. 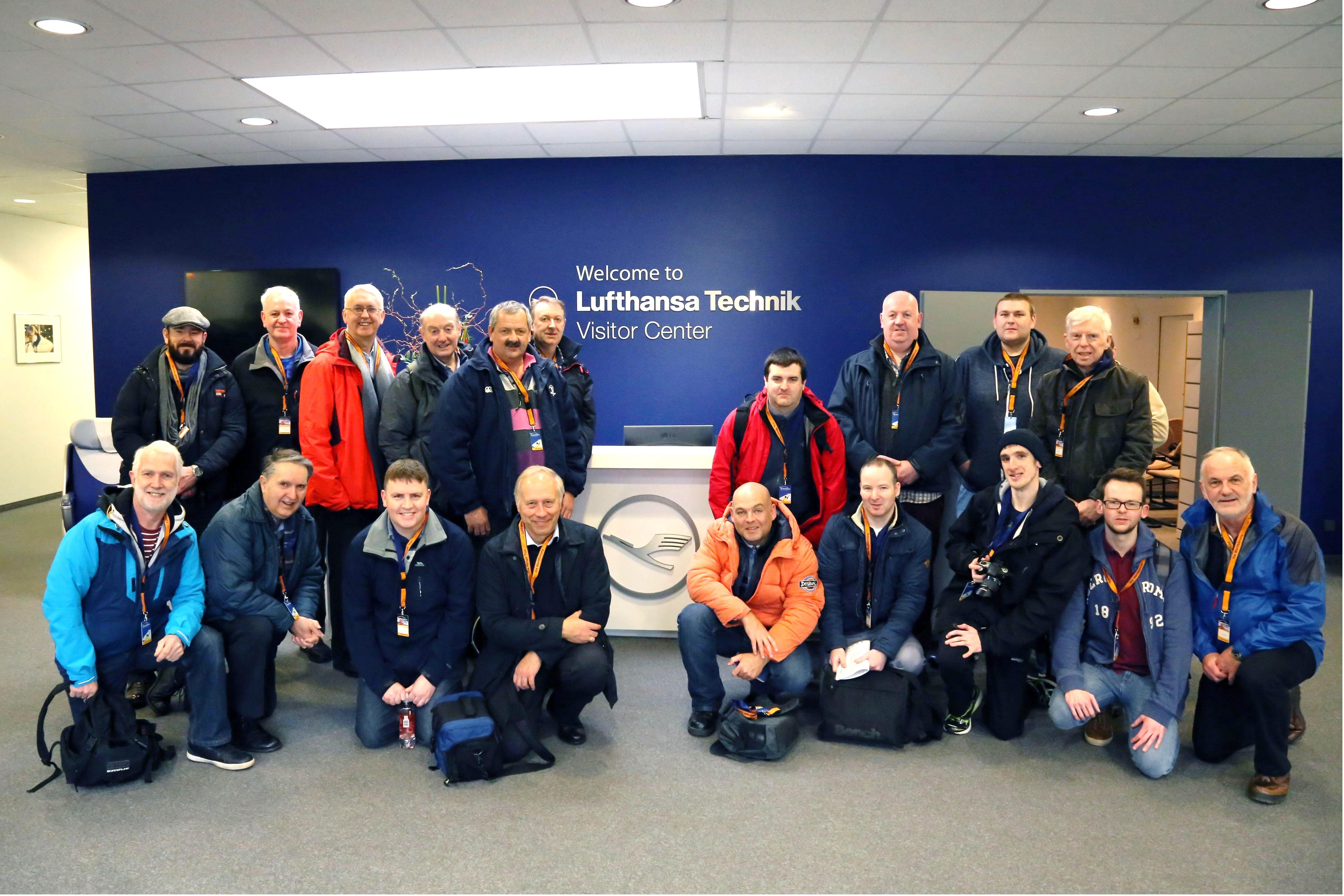 Biggest question for most was, just what will be present during our visit? Akin to knowing the sex of an unborn child, some wishing to know the aircraft due in on the day others opting to maintain the suspense until stepping inside the hangars. As it turned out, the entire group would be left guessing. The group, this time had an international flavour, majority being Irish but with representatives from Switzerland, Belgium, France and the UK.

The date of Thursday 2nd March couldn’t come quick enough, an early morning Aer Lingus flight from Dublin was to take most of the group to Hamburg. Departing from Terminal 1 instead of Terminal 2 was the only disappointment. Based almost entirely at T2, a handful of the airlines flights leave from T1. This slight feeling of downgrading also ment no air-corridor boarding instead a short walk in the drizzle to board al-fresco style. Once underway, all was forgiven as that “good-feel” synonymous with Aer Lingus service was experienced. A shorter journey time than expected of 1hr 35min saw the A320 ever so smoothly touch down at Hamburg Airport. Spotting began even before we were off the aircraft with some interesting aircraft visible through our windows. While other members of the group flying in from other locations were rounded up, some took the opportunity for a bite to eat and a visit to both roof top Viewing Terrace’s T1 & T2. 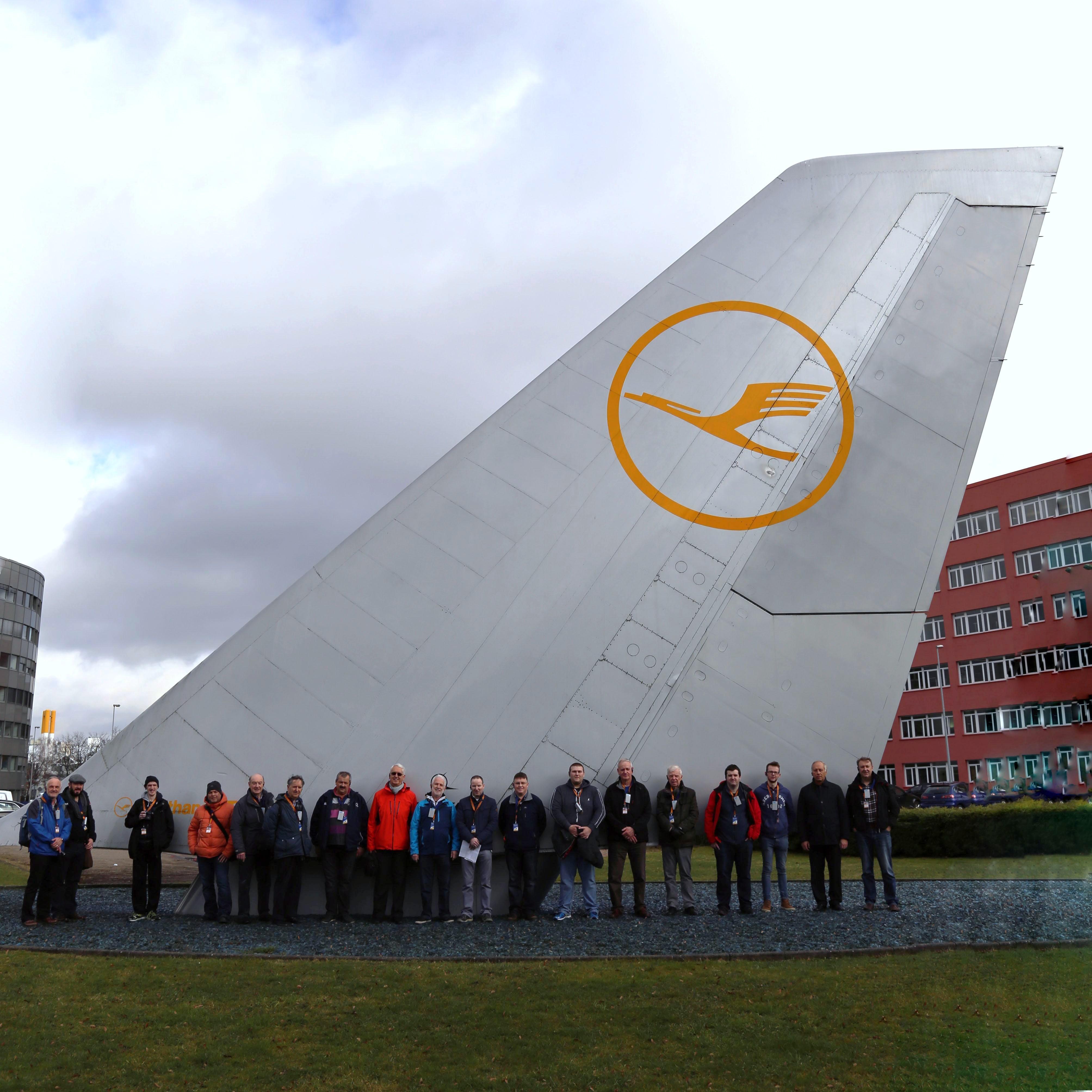 Before long we piled onto the bus for the short drive to Lufthansa. It seemed the drizzle had followed us from Dublin but a warm and friendly welcome from our Lufthansa guide “Jurgen” at the Visitors Suite put any dampness to the back of our minds. Visitor I.D. tags equipped, A.V. presentation and briefing completed, stern words relating to zero-photography, the group set off, linked to our guide with mic/earpiece, passing through security check and onto the streets of Lufthansa Technik Hamburg “Vonderland”.

Hangar’s, workshops, engineering centres, offices, facilities of all types, all laid out in an enormous town setting spread across acres of space, even with its own bus services constantly running. There was a definite buzz about the place, a hive of aviation activity. 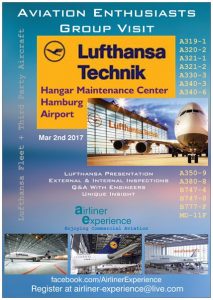 The Flyer advertising the trip to the Lufthansa Technik facility

We are required to keep the identities of the aircraft the group viewed, private. The first hangar we entered saw a passenger B747-8i from a Middle Eastern airline just departing. Deep inside the hangar with its tail left outside in the cold, jammed between the huge doors was another B747-8i also of Middle Eastern origin but this one being a full VIP BBJ version. Details about the internal fit-outs for some of the super wealthy clients was discussed and had most of us mesmerised by the sheer expense involved and with an “anything-is-possible” attitude by Lufthansa Technik, the sky really is the limit for the uber-rich.

Jurgen delivered thorough explanations of the work carried out at the facility and was a wealth of information regarding the entire operations. His forty years as a senior engineer at Lufthansa Technik was clear indeed. A fabulous guide and so enjoyable to listen to. He appeared quite surprised the group had travelled as far as we did for the purpose of visiting “His Company” which he is no doubt extremely proud of. 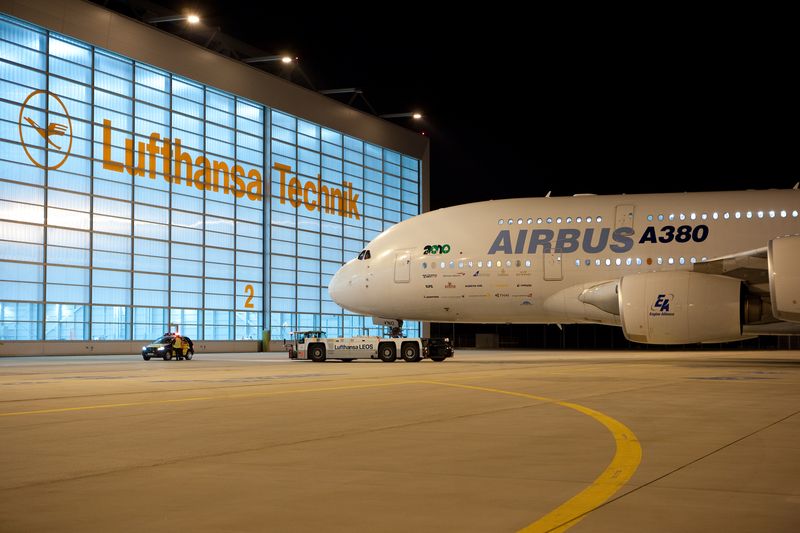 We proceeded to pass through hangar after hangar, each as busy as the next. A favourite means of getting around through the vast complex is the company bicycle, complete with active bell. An A321 and an A319 VIP government aircraft were undergoing maintenance in another hangar. Then came one of the giant A380’s in a hangar on its own, having its first D-Check since delivery, a task which can take up to three months and 100,000 man-hours to complete.

Our fourth hangar visit revealed two A320’s of separate German airlines while the fifth concealed some even more eye-opening machines. Here a passenger A330-300 was surrounded in scaffold and under heavy maintenance. The group clambered over it under instruction from our guide and peered inside before crossing a “wing-bridge”, a view one is not often privy to. Next to the Airbus was a rather fetching B737-800 BBJ in a stunning molten-grey livery. Also present in this area was a government A340-300 VIP from a Southern African nation complete with flowing coloured swirls the length of its fuselage. 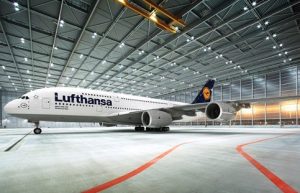 Outside, the group viewed another African A340 this time a -200 series undergoing repairs for damage it received in a conflict. Like an ER (Emergency Room), engineers at Lufthansa Technik will provide the attention this aircraft needs to perform again. Another A340-300 VIP government aircraft was seeing to its final checks and with engines started began its taxi to depart Lufthansa Technik and Hamburg airport.

Access was also provided to the worlds largest aero engine maintenance centre where the group witnessed the large highly skilled workforce build and fettle large turbofan engines for countless customer airlines. A visit was also provided to the spare parts division of Lufthansa Technik where literally millions of spares are housed costing millions of Euros. The numbers revealed to us by our guide were simply staggering. 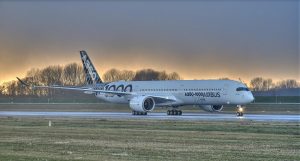 After we bid farewell to Jurgen and our hosts Lufthansa Technik Hamburg, for half of the group it was a dash back to the airport for some brief spotting before flights home. For others the Hamburg trip was just getting into its stride.

After Lufthansa we checked in at our Hotel and freshened up before taking the train to the city centre that evening. After roaming round Hamburg centre we slipped into an Italian for a tasty local dish – each having a Schnitzel variation. Then it was into several taxi’s in search of the surprisingly unknown Soviet Cold War Sub U-434. Finally the hunt for the illusive underwater boat was over. Spotted through the drizzle and darkness, lurking in deep water in a corner of the Port. Through the Visitors Centre and with tickets in hand we boarded the 1976, 90m long menacing semi-submerged black hulk, apprehensively. What a thrill we had – fun times indeed. More taxi’s and trains later we were finally back in our Hotel where we retreated to the snug to digest the days experiences. 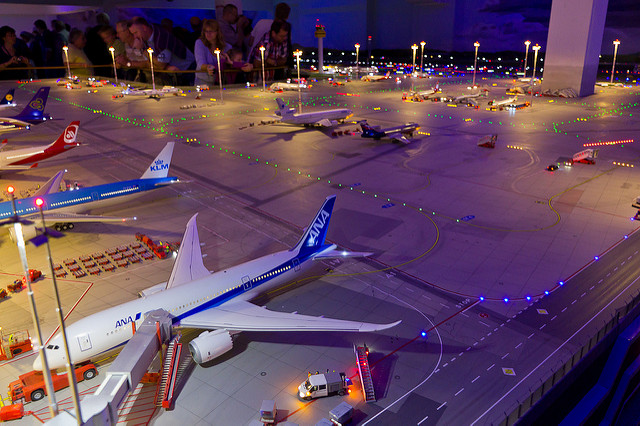 Friday morning it was back to the city for the Worlds Largest Model Airport and Railway, located at Miniature Wunderland. Blown away by this permanent exhibit, for its sheer size and detail – 3 hours of amazement. The group then reduced in size with the majority heading to the Airport for their return flight.

For the last remaining diehards, Hamburg was not complete without stopping by one final destination. The slimmed-down group took a ferry down the river and over to Finkenwerder and another bus before visiting the Airbus Factory for a 2.5 hour tour. A brilliant visit again with ear piece and mic just like at Lufthansa. Four A380’s all Emirates were present, A350-1000 carbon-fiber look livery along with A321’s, A320’s, A319’s etc. all spread out across a vast aviation urban centre. Another fabulous experience. 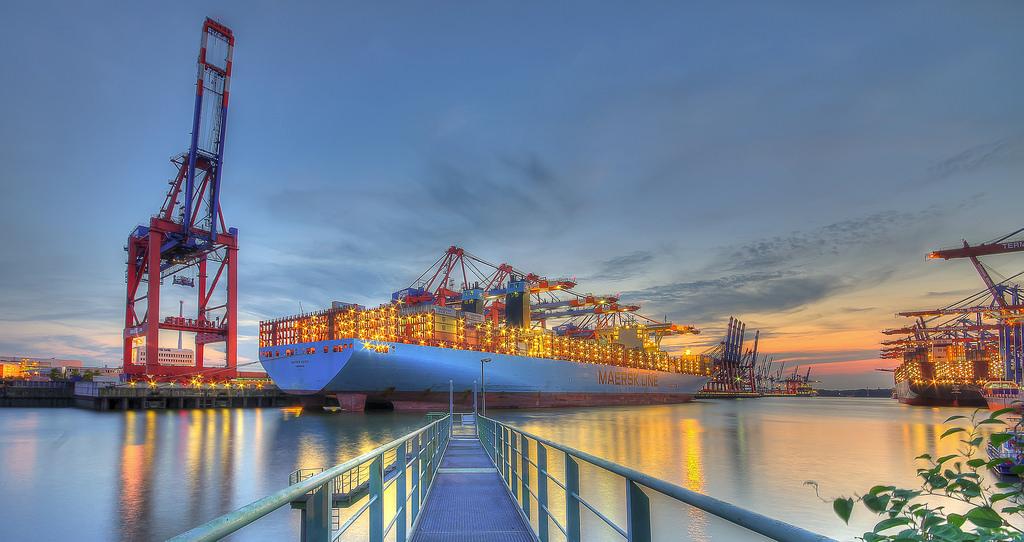 Late back to the Hotel and out early again Saturday morning and to the city one final time. This time for Architecture and the Port. Stunning building design both new and historic fused together, all wrapped up in a delicious urban landscape which had the curious longing for more. Mingled within the city fabric came a sprinkling of boats, ships, vessels of every sort and so many many fabulous cars ! With so much on offer visually, it was difficult to absorb it all. An outstanding city. To the Airport then for some last minute Terrace spotting before a heavy flight home with 181 Germans and 8 Irish on board. A long run up the runway before a very shallow angle climb-out. It was clear the Ryanair B737 was at maximum load as a number of pull-along cases were removed from the cabin bins and put in the hold ! Travel light……..Not if your German.

Just like the German tourists who travelled to Dublin on our return flight, Lufthansa Technik Hamburg don’t do things by half. Fully committed to the task of aircraft maintenance has gained the company the highest reputation attainable. A badge they wear on their sleeve…………Surprised by our visit, no, amazed by it, most certainly.

Each and everyone who participated – The Enthusiasts