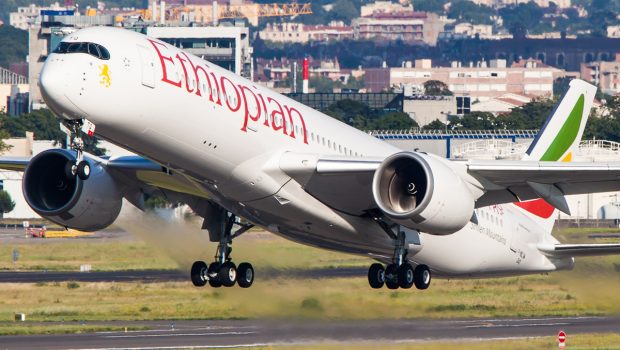 Ethiopian Airlines announced on Thursday that it will be part of the annual Global Greening initiative this St. Patrick’s Day. As part of the “Greenification of the World” campaign, launched by the Tourism Ireland eight years ago, Africa’s first Ethiopian Airbus A350 will join a string of world landmarks in the campaign including New York’s World Trade Center, City Hall and Heron Tower in London, Plaça de Catalunya and the fountains on Gran Via in Barcelona, Pozzo di San Patrizio in Italy, Matsue Castle in Japan and the Diamond Bridge in South Korea.

The A350 XWB is one of the most comfortable, technologically innovative and fuel-efficient aircraft in the market today, providing exceptional levels of luxury and reliability combined with the latest technology for a totally unique passenger experience. Airbus have delivered 70 A350’s to date with a total of 821 ordered. Ethiopian have received three of the 12 A350-900’s they have ordered.

Ethiopian Group CEO Mr. Tewolde GebreMariam remarked “We are proud to join the world global landmarks for St. Patrick’s Day greening Africa’s first A350 XWB; our latest and game changing flying machine. The A350 is among the notable landmarks in Ethiopian 70-year history, with which Ethiopian has pioneered the extra effect to the African continent. Moreover, this collaboration is a continuation of the long standing social, cultural and economic collaboration between Ethiopia and the People of Ireland. I wish all a happy festivity.”