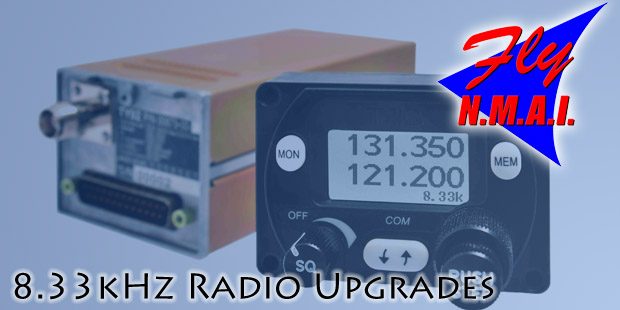 The National Microlight Association of Ireland (NMAI) is delighted to announce a refund scheme for General Aviation radio upgrades. A consortium led by IAOPA Europe and aviation consultants Helios has applied for EU funds to offset the cost of upgrading equipment to meet new rules on 8.33kHz channel spacing – and they are calling on General Aviation (GA) users and aerodromes to pre-register now to obtain refunds, where applicable. The NMAI is the lead association for Ireland.

Expansion of the voice channels available helps relieve congestion in the VHF band as mandated by SESAR – Single European Sky. Upper airspace has already converted to 8.33kHz spacing and regulatory attention is now switching to airspace below FL195, commonly used by the GA community. The new regulations will affect all radios operating in the 117.975-137MHz band (the VHF band) – both airborne and ground based – and come into force from 31st December 2017. They affect aircraft flying in any class of airspace, once a radio is used.

If the consortium’s application is successful, a refund of at least 20% of the cost of the 8.33kHz radio could be available. This will ease the financial burden for all general aviation aircraft and aerodrome owners in no fewer than 19 countries with the expected upgrades expected to cost up to €147 million. The countries affected are Austria, Belgium, Denmark, Finland, Germany, Greece, Ireland, Lithuania, Luxembourg, Malta, Netherlands, Norway, Portugal, Romania, Spain, Slovakia, Slovenia, Sweden and Switzerland.

For Ireland, the NMAI, with help from the IAA, made the effort of collecting data and submitting a national application. The number of aircraft estimated to require a radio upgrade in Ireland could be up to 550 and the estimated amount to be spent is in the region of €1.73 million. If this application is successful, €345,000 will be refunded to the local GA community during the years 2017 and 2018.

Mark Dwyer, Chairman of the NMAI commented on the announcement saying “The NMAI have spent a lot of time putting this application together, not just to benefit our members, but the entire General Aviation community in Ireland. We are delighted that up to €345,000 in refunds could be available to the Irish GA community to offset the costs of upgrading to 8.33 kHz radios.”

He went on to say “I’d particularly like to thank Ruth Bagnell from the Irish Aviation Authority for the help and guidance putting this application together, her support was invaluable. We’d also like to thank Kevin Doyle, Aviation Services and Security Division of Department of Transport, Tourism and Sport for co-signing our application.”

Commenting on the initiative, Dr Michael Erb, Senior Vice President IAOPA (Europe) said “New 8.33 radios in certified aircraft cost an average of around €5,000. So, it’s definitely worth making a claim. We’ve applied for almost €37 million in grant funding, which would support the upgrade costs for over 26,000 airframes.” The cost of uncertified radios that may be fitted to aircraft operating on a Flight Permit is thought to be closer to €1,000.

Philip Church, Helios’ project director noted “The timescales for the mandate are tight and the period to admit claims will be short. To increase the chance of getting a partial reimbursement of your costs, we recommend that owners sign up right away and actively plan on equipping within the project timescales. It is a very simple registration procedure and you do not need to submit any documentation at this stage.”

IAOPA Europe invites all GA aerodromes, aircraft owners, pilots and AeroClubs of all aircraft registered or owners based within the participating countries to find out more and pre-register at their dedicated website. Please visit www.nmai.ie/8-33khz-radio-refunds/ for full details. The refunds will be available for upgrades of radio equipment after February 7th, 2017 on a “first come, first served” basis.