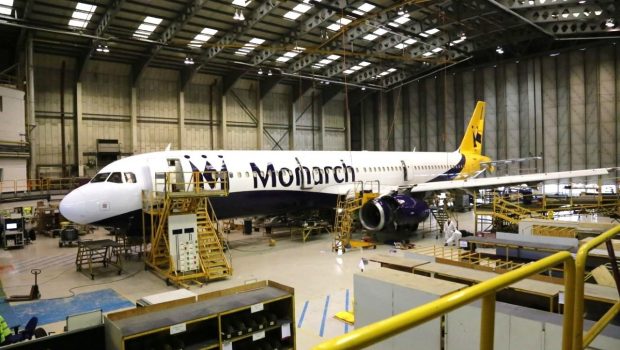 A Day Under The Crown

And so it was, permission obtained and a date was set, Airliner Experience would go to the Ball and the venue for that Ball, the great hall at Monarch Aircraft Engineering – Luton Airport…………..

Not for the first time has a group of aviation enthusiasts with Airliner Experience crossed the threshold of Monarch aircraft maintenance hangars. Indeed in April 2015 a larger group travelled to Birmingham Airport to visit MAEL’s latest and largest maintenance facility and were treated to a fabulous tour. This time though, it was a group visit to Monarch’s Headquarters and home base facility at Luton. A little smaller than that established at Birmingham but equally busy during the Winter maintenance schedule. 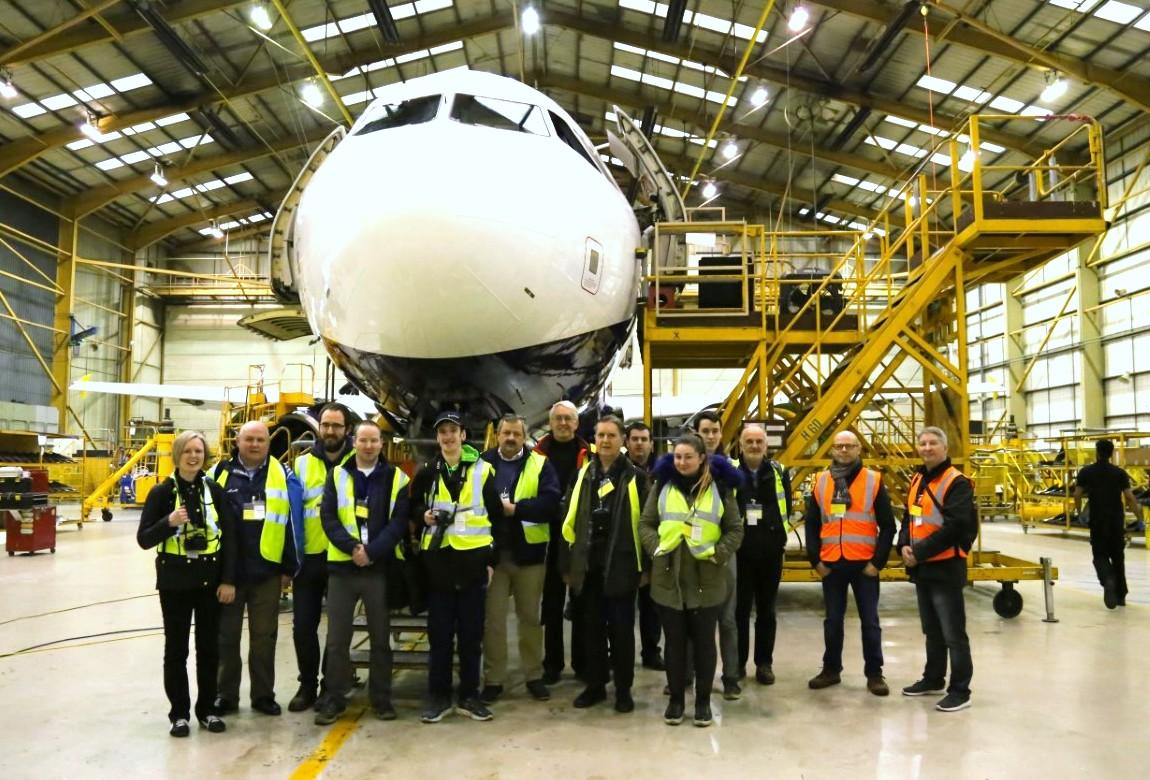 MAEL is part of the Monarch Group and provides aircraft maintenance on the airline’s fleet of Airbus A320’s and A321’s along with providing services for third party airlines of which the list is extensive and literally spans the globe. Such is the quality and respect for the Monarch brand that many airlines from outside the UK look for their aircraft to be maintained by Monarch. 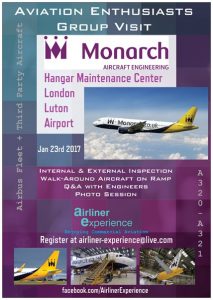 An early Monday morning start on January 23rd last saw the group of eager enthusiasts gather at T1 – Dublin Airport for our Ryanair flight to Luton. As it turned out it was a morning of flight delays due to a fog bound London region but good fortune was on our side with our aircraft being unaffected and arrived on stand at Luton precisely on time at 09:30. It was a chilly -3 degree greeting but not an issue for hardy enthusiasts. Most faces on this trip were familiar to each with just a few new people joining us. Aviation enthusiasts are not known to bite (well not too hard anyway) so first timers are always welcome.

Having left the stylish and modern confines of what is Dublin Airport today, a slightly unkempt Luton Airport was a surprise. To be honest, the place at present is in complete turmoil due to a major regeneration program. The landside infrastructure is presently a construction site and in fairness the airport is still functioning well, if a little unsightly. This will all be for the greater good once the new Terminals and additions are opened.

A light breakfast was downed by the group while a ‘catch-up’ was had with friends. Huddled in small groups in our chosen café, the topic of conversation was universally aviation in flavour. With data-sheet hand-outs distributed among the group it was off for a dash of ‘spotting’ in the sharp Luton air. One of our ‘scouts’ had already identified a most agreeable vantage point – a newly constructed multi-storey car park (take back all said about the intrusive construction works) which protrudes into the airfield space providing excellent viewing of landing and departing aircraft on RW26. 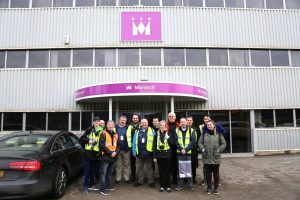 Luton, the UK’s busiest airport for business jets lived up to its name with a steady flow and a range of types. Mixed in with the private aircraft were the expected representatives from easyjet, Ryanair & Wizz Air with occasional aircraft from Thomson Airlines, Thomas Cook Airlines, Monarch Airlines, Vueling and Blue Air. Two surprises which made an appearance were the arrival of an EL AL B737-800 and a departure of MNG Cargo A330-243F. 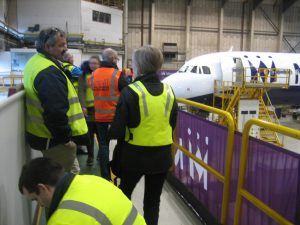 After ‘marching the troops’ through the runway under-pass, around the airport perimeter, bowing at Monarch HQ offices, we arrived at Monarch Aircraft Engineering for our 12 noon appointment. The group received a warm welcome from Phil along with a briefing. With Airliner Experience ID Tags and Monarch Security Passes strapped to each it was through the doors and onto the hangar floor. The two large hangars were active with Monarch aircraft. Engineers and technicians were busy performing their tasks as we moved to a higher vantage point up on a mezzanine level. Phil conducted the tour in his usual informative and thoroughly enjoyable fashion with added humour throughout. Andy from the Monarch PR Dept. brought up the rear and was on hand for questions. 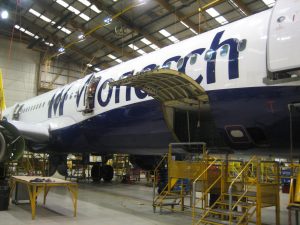 A pair of Monarch Airlines A321’s were under-going routine maintenance and the group were led around one for further insight from Phil regarding every stage of the maintenance process. Our external inspection continued with undercarriage, wings, APU & tail area, fuselage aspects, even toilet’s were discussed with ‘delightful’ accounts from Phil from his time spent as a Monarch pilot. A combined learning experience in itself and a rare opportunity to view and explore large commercial aircraft in this way. Monarch Airlines are currently refurbishing the seating on their Airbus fleet to the latest ‘slim-line’ style and providing In Flight Entertainment through use of passengers own electronic devices being connected to a world of entertainment through wifi. The group accessed the cabin and enjoyed visits to the cockpit where information continued to flow and questions were answered. Further discussions were had on the hangar floor regarding the company’s operations, history and future. A real privilege to have been allowed access to the Monarch hangar as it is not something that happens too often for enthusiasts. Staff were extremely generous with their time and permitting us access to the hangars while day-to-day work was being carried out. 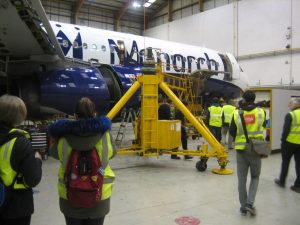 After our Monarch visit had ended most were in the mood for watching active aircraft and so it was back for a second round of ‘spotting’ from our earlier adopted vantage point. Once the cold set in and hunger pains began to develop it was time to hunt down a nice eatery and indulge ourselves.

Our Ryanair evening return flight to Dublin was nothing out of the ordinary…that is until sometime after a noticeably steeper than usual angle of departure, the update from the flight deck informed us that ATC clearance had permitted a flight level of 40,000 ft. This was the ‘sling-shot’ method in use from London to Dublin whereby Ryanair depart steeply and climb rapidly to a much higher than usual altitude and once reached, throttle back and ‘coast’ slightly downward all the way to Dublin Airport. In fact the crew had reduced power and begun a shallow angle of approach even before the aircraft left UK land and started out over the Irish Sea. 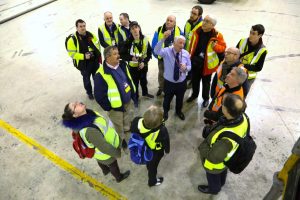 What’s in a name, a name like Monarch instils brand quality, resilience and establishment, attributes all of which help contribute to the longest serving British airline and aircraft maintenance branch to retain its original name. It’s thanks to aviation enthusiasts, their desire and intense interest in all aspects of aviation that makes a fantastic group visit to Monarch Luton possible. Many thanks to each who attended.

And finally, thank you to Phil, Michelle, Nick and Andy of Monarch Aircraft Engineering Ltd. for what was a most satisfying aviation experience.