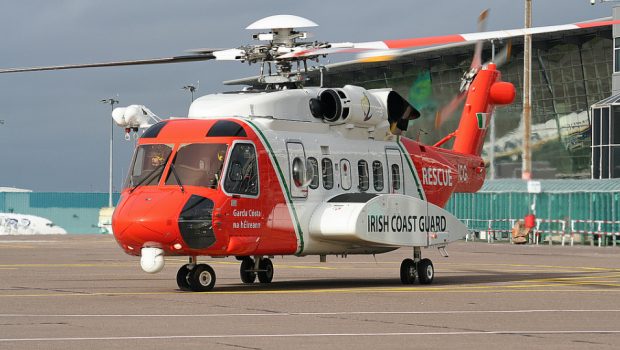 Irish Coast Guard coordinated some 2,500 incidents in 2016 but helicopter callouts down on 2015

On 29th December, the Irish Coast Guard (IRCG) published its end of year statement, outlining its principal activities and publishing provisional statistics for 2016. The IRCG is a Division of the Department of Transport, Tourism and Sport, who’s Secretary General, since November 2015, is Graham Doyle, former Chief Executive of Waterford Airport (from October 2006 to June 2013). Political Leadership of the Department is provided by the current Minister, Shane Ross, who was appointed by the Taoiseach on 6th May 2016.

The IRCG was originally established as the Irish Marine Emergency Service (IMES) and adopted its present name in 2000, while it was still a Division of the Department of the Marine. It subsequently transferred to the Department of Transport, Tourism and Sport in 2006. The current acting Director is Eugene Clonan, a former Naval Service officer, and current Chief of Operations of the IRCG. 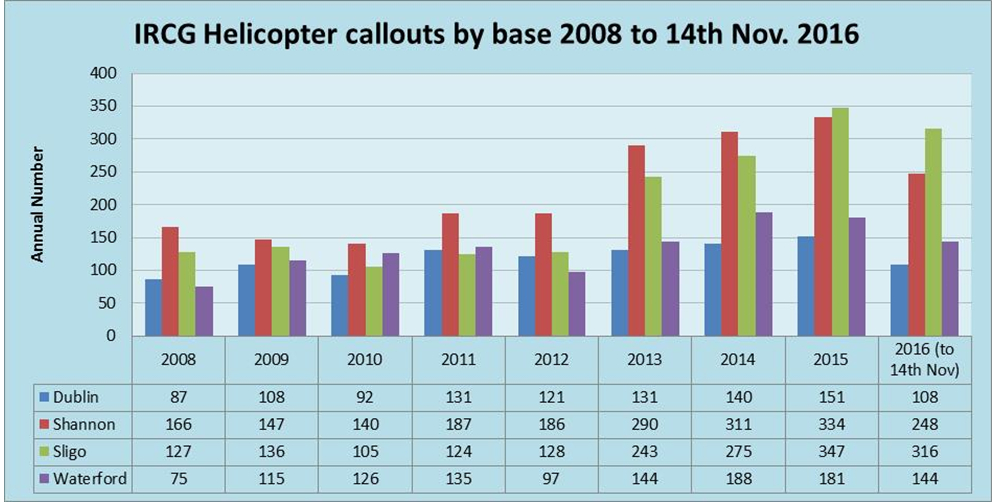 The IRCG also maintains a network of 43 strategically located Coastal Units, equipped to deal with local marine emergencies, manned by approximately 900 volunteers. Finally, a fleet of SAR helicopters are operated through a contact with CHC Ireland (see below).

NMOC provides marine search and rescue response services and coordinates the response to marine casualty incidents, within the Irish Pollution Responsibility Zone/EEZ, while the MRSCs provide SAR response in their areas of responsibility. These are supported by an Engineering and Logistics Centre (Ballycollin, Dublin 11) and offices in Cork City and Castlebar, Co. Mayo. Operations include the mobilisation, organisation and tasking of adequate resources to respond to persons in distress at sea, or to persons at risk of injury or death on the cliffs, shoreline and inland waterways of Ireland. Such taskings may include a direct response initiated by the IRCG, or a response on foot of a request from an Garda Síochána.

Overall, the IRCG coordinated some 2,500 incidents through the three MRCCs. A total of 405 people who were rescued or assisted, were categorised as ‘lives saved,’ on the basis that the intervention, precluded loss of life, or severe risk of loss of life. The IRCG noted an increase in kayaking and surfing related incidents, with a total of 45 individual incidents, requiring a response being recorded. Its units and helicopters, assisted with the recovery of 45 bodies, as a result of drowning and other missing person searches.

The Coast Guard volunteer units which provide; Search, Rescue Boat and Cliff Rescue services in addition to local community support during inclement weather, or other emergencies, responded to 1,042 incidents. These Units also work closely with Coast Guard helicopters in supervising helicopter landing sites, as used in provision of aeromedical support to the HSE.

These units including, Dingle, Castletownbere, Killybegs and Westport, participated in 86 mountain rescue missions, in conjunction with Mountain Rescue Ireland, of which 77 involved casualty recovery by the SAR Helicopters.

Volunteer lost while on a recovery mission

The tragic loss of Volunteer Caitríona Lucas, cast a dark shadow over all Coast Guard activities. Caitríona, who was a member of the Doolin unit, was participating in a search operation off Kilkee on 12th September, when she lost her life. She was the first volunteer member of the Coast Guard to lose her life on operational service and her death emphasised the dangers faced by its members. This heart-breaking incident paradoxically, also raised the profile of its work: its members in their free time to helping others, carrying the weight of responsibility of each incident, and putting their lives at risk for the benefit of the community. When they’re not responding to a call, volunteers train more than once a week in order to perform highly technical activities. This can include how to operate boats, how to perform cliff rescues, or conducting shoreline searches.

The IRCG enjoys a close and valued relationship with the Royal National Lifeboat Institution (RNLI) and acknowledged the responsibility undertaken by the RNLI, and commended the dedication and commitment of the RNLI and its Volunteers. RNLI lifeboats were requested to launch on 837 occasions, marginally higher that the corresponding figure for 2015.

During the year the IRCG completed a memorandum of understanding (MoU) with Comhairle fo Thuinn (CFT), the Irish Underwater Council, with regard to provision of qualified divers at search operations. A Coast Guard spokesperson also thanked the Naval Service and Gardaí for the ongoing provision of Diving teams to search operations throughout the year. In all 21 specific diving related searches were conducted by Gardaí, Navy and CFT Dive teams.

It also agreed an MoU with Dublin Fire Brigade with regard to coordination of SAR operations on the lower River Liffey.

It is probably worth looking in some detail at the SAR helicopter activities of the IRCG. This service is currently provided under contract by CHC Ireland, who provide, maintain and operate a 24/7 SAR helicopter service, from four airport locations – Dublin, Shannon, Waterford and Sligo, using five Sikorsky S-92A’s. The current contract for the helicopter SAR services was signed by the then Minister for Transport, Noel Dempsey, in July 2010. The contract came into effect on the 1st July 2012 and is for 10 years with an option to extend the contract for a period, or periods, of up to an additional three years for each or all bases. Overall the total value of the contract was in excess €500 million. The estimated cost of the contract in 2016 was €59.6 million including VAT. 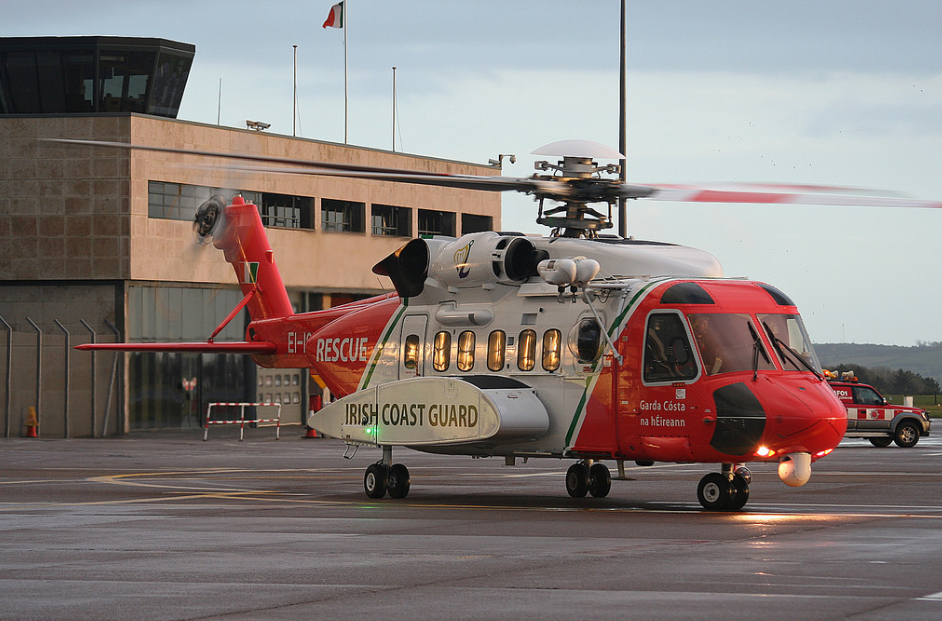 IRCG helicopters assisted the HSE/National Ambulance Service on 258 occasions in 2016. They can also be used for assistance in flooding, major emergencies inland, pollution, and aerial surveillance during daylight hours, lifting and passenger operations and other operations as requested by the IRCG and authorised or approved by the Irish Aviation Authority (IAA) in accordance with the appropriate aviation regulations. The helicopters also flew 23 suspected pollution investigation missions – arising from satellite based reports.

In their main SAR role, the helicopters conducted 20 Long Range offshore missions, involving casualty evacuations at ranges exceeding 100 miles from land. The longest of these missions was conducted at a range of 150 miles West of Loop Head, Co Clare on 7th March, when an injured crewman was airlifted for transfer to hospital. Overall Coast Guard Helicopters completed 886 missions which included 36 casualty evacuations at sea.

This is well down on 2015 when the SAR helicopters were tasked 1,013 times to incidents. Details of the number of callouts, and from which bases, are illustrated in the following graphs below.

As part of its contract, the IRCG gets flying time of a minimum of 65 hours per month, at each of the four bases. Typically the 65 hours would be split evenly between training and operations.

IRCG helicopters are designated wheels up from initial notification in 15 minutes during daylight hours and 45 at night. One aircraft is fitted and its crew trained for under slung cargo operations up to 3000kgs and is available on short notice and is based at Waterford.

The range of tasks for the helicopters, specified under the Irish National SAR Framework, are:

The secondary roles of the helicopter include: 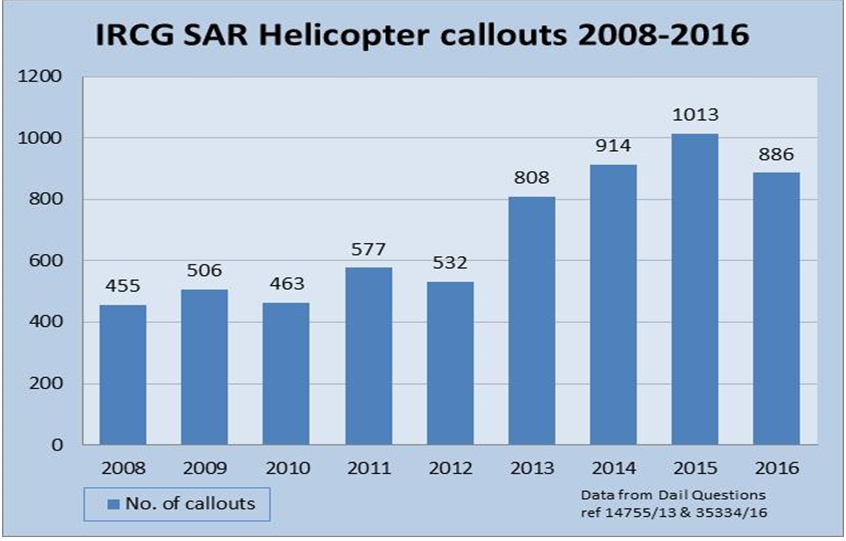 The end of year statement from the IRCG, stressed the Importance of safety equipment. It noted that the use of Personal Locator Beacons (PLBs) and Electronic Position Indicating Radio Beacons (EPIRBs) were responsible for directly saving the lives of Five Mariners in 2016. One of these incidents related to an IRCG helicopter rescue of a lone yachtsman, whose yacht had overturned, 20 miles south of Co Wexford. A second related to the location and recovery of three fishermen whose vessel had sunk, you can read more on focusfishing.com about the recovery of their vessel. The third incident concerned the location of a single crewed yacht which had become dis-masted off the SW Coast and was subsequently towed to Castletownbere, Co Cork.

An unfortunate side effect to EPIRBs and PLBs is the number of false activations arising from alerts being raised by equipment, which the owner’s had assumed were properly disposed of when no longer in use. In a majority of cases owners can be quickly tracked enabling the alert to be cancelled, but such errors can result in the unnecessary activation of response units. In all the Coast Guard received 89 EPIRB/PLB alerts, which were subsequently classified as being false or in error, many of which related to equipment no longer in use. They have therefore appealed to all EPIRB users to deregister and properly dispose of disused EPIRBs.

In relation to drownings, adult males continue to be the most vulnerable group. Preliminary casualty assessment shows that well over 50% of people requiring assistance were not wearing Lifejackets.

The Coast Guard attaches great importance to prevention as the primary strategy in reducing loss of life at sea and its most recent campaign focused on the theme of ‘No Lifejacket – No Excuse’. In 2017 a new departure will see the launch of a safety message based on the importance of retaining the ability to stay afloat coupled with a capacity to raise the alarm utilising the theme ‘Stay Afloat – Stay in Contact’.

During the year their units continued to deliver a primary school water safety programme where the importance of wearing Lifejackets/ Personal Flotation Devices is emphasised. This strategy was backed up by patrols conducted by IRCG units where compliance with lifejacket/PFD requirements were checked and monitored. 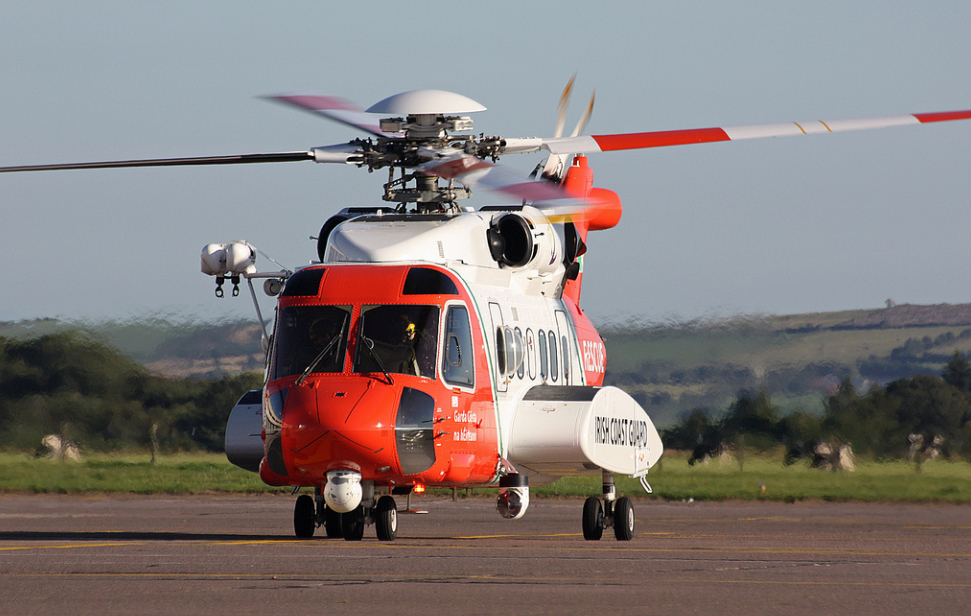 The Coast Guard congratulated BIM on their safety initiative aimed at encouraging the fishing community to wear lifejackets at all times. The leisure community were also congratulated for their very high levels of compliance with basic water safety.

Finally, the IRCG reminds the public to raise the alarm if they think they are in trouble, as it might be too late when you are in trouble. Their core message is;

If you see anybody in trouble at sea, on the coast or on cliffs call 112 and ask for the Coast Guard.

Acting Coast Guard Director Eugene Clonan has all thanked all the staff and volunteers who have contributed to the many missions that were undertaken in 2016. In the statement he said; “I would also like to thank the Naval Service, Air Corps, RNLI, Community Rescue Boats, Gardaí, Mountain Rescue teams, the National Ambulance Service, Fire Service, Irish Under Water Council and other statutory and voluntary services, who we have worked together so well throughout the year. I want to particularly recognise the many volunteers who responded with such professionalism, whether that be in the Coast Guard, RNLI, Community Rescue Boats (CRBI) or Mountain Rescue teams. Sadly – at this time we remember the family of Caitríona Lucas and recall Caitríona as a person who so embodied the volunteer ethos.”