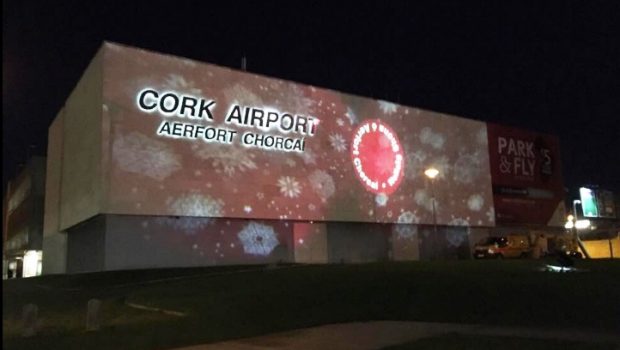 Tears of joy, smiles and hugs, together with two choirs, from St Mary’s National School in Cobh and Scoil Bernadette in Cork city, was the scene, as hundreds people returned home to Cork Airport on 21st December, to spend Christmas with their families and loved ones. Cork Airport was packed, as people gathered, to welcome home their nearest and dearest, some of whom they had not seen for years. However, it was not the busiest day of the Christmas rush, which was three days earlier on Sunday, 18th December, as airlines arriving at the airport that day had a total capacity of 7,350 seats available. The busiest arrivals period was 10.00-12.00, with 06.00-08.00 being the busiest departures period. Festive cheer for the arrivals at Cork Airport

Cork Airport had prepared well for its busiest time of the year, and it made sure to spread Christmas cheer, for over 135,000 passengers, travelling over the festive season. The airport had planned carefully for almost 1,000 inbound and outbound flights from 18th December through to 8th January 2017.

Commenting in advance of the Christmas rush, Kevin Cullinane, Head of Communications at Cork Airport said: “Christmas is special for a number of reasons at the airport. It is especially wonderful to see family and friends reunited for the holidays, but it also provides opportunity and responsibility.

“We seize this busy time as a chance to prove our capability in welcoming and setting loved ones off on their way over the holiday period in the safest and most efficient way possible. It’s all about our fly friendly ethos,” he added.

The return wave started early, with Friday, 30th December being the busiest day after Christmas, when there was a total capacity of over 7,000 seats available. The busiest departures period was be 06.00-08.00 with 10.00-12.00 being the busiest arrivals period.

As well as catering for the busiest days of the year, Cork Airport had two very important Aer Lingus flights departing before Christmas, which took the good boys and girls of Munster to visit Santa Claus in Lapland. Aer Lingus also operated an additional Cork – London Heathrow service, on 22nd December.

2016 has been a very good year for Cork Airport, with the announcement of a number of new routes and new airline partners. “We were absolutely delighted to finally secure a foreign carrier permit for our first direct transatlantic services with Norwegian Air International (NAI) in recent weeks. It is a truly historic development for Cork Airport and the entire south of Ireland region. We have also secured new North American routes with WOW air via Reykjavik and with Swiss Air to Zurich. We’re very much looking forward to the new year and the opportunities that it will bring,” said Mr Cullinane.

Following the recent and previously announced new routes from WOW air, Swiss International Air, Norwegian Air and Volotea (announced on 7th October), there was further good news for Cork Airport with the announcement by Aer Lingus, that it would increase its capacity across a number of its most popular routes, for Summer 2017. This will see 1.1 million available seats for next summer to London and popular sun and European city destinations such as Alicante, Amsterdam, Barcelona, Faro, Palma and Paris.

The announcement by Cork Airport’s largest airline partner was made at a media briefing on 15th December, at Cork Airport, attended by Mike Rutter, Aer Lingus Chief Operating Officer. Aer Lingus on a Winter’s Day in Cork. Paul Daly

The Aer Lingus Cork base has enjoyed significant growth year on year, equating to 31,000 additional seats and next summer will see a further 113 flights to and from Cork, due to greater frequency on its London Heathrow route and summer sun routes. Summer 2017 marks a 9% growth in its weekly flights and capacity, when compared to 2016, and a 15% growth from 2015.

The Cork London Heathrow route continues to expand by a further six weekly flights year on year and the 2017 summer schedule boasts an additional 26,000 seats between Cork and London. During the peak summer months, (June, July and August), Aer Lingus will operate five daily services from Cork to London from Monday to Saturday which represents 22% growth in weekly frequency and a total of 319,000 seats during summer 2017.

Aer Lingus will also increase availability to key summer sun destinations from Cork Airport, with a total of 319,000 seats to Alicante, Malaga, Gran Canaria, Lanzarote and Palma among others. Peak summer will see a growth of almost 50% on Alicante flights, 15% growth on its Barcelona route, and increased flights (11%) to Faro. There will also be additional early season flights to Palma and Malaga and additional end of season flights to Las Palmas from Cork Airport.

Welcoming the capacity and passenger growth for next summer by the Airport’s “oldest and largest airline partner”, Niall MacCarthy, Managing Director at Cork Airport, said that the expansion of the Heathrow, route the largest route across all its airline partners and the “mainstay” of the Cork operation “for both direct London and long haul connectivity,” would be particularly welcomed by the business community. Leisure customers would “welcome the extra capacity on Summer sun favourites Alicante, Faro, Palma, Malaga and city break destination Barcelona” he added.

Mr. Rutter added the 1.1 million seats in and out of Cork, as part of the 2017 summer schedule, was designed to retain Aer Lingus’ position, as the leading carrier operating from Cork and serving the wider Munster region. The Cork-Heathrow route will enjoy greater connectivity with an additional 26,000 seats and during peak summer will operate five daily services during Monday to Saturday.

Commenting on plans to grow services out of the region, he said that Aer Lingus had no plans to introduce its own transatlantic flights from Cork Airport, but that may change in 2020 with the airline looking at the A321neo aircraft, which he described “as a smaller version of the A320 that is suitable for transatlantic travel”. Presumably what he meant was in terms of seating capacity, which is likely in a two class configuration, or it could simply be an erroneous reference to the A330.

He added that he did not think Norwegian Air International would have an impact on Dublin once it began flights to the US from Cork next year, although the introduction of transatlantic flights from Cork Airport may negatively impact Shannon, he conceded.

Mr Rutter added that the company’s focus for Cork Airport was on growing its existing routes and potentially launching new services to the EU. “Nobody should be under any illusion that we intend to do anything other than expand business in Cork. Our primary aim is to make Cork robust by spending enough money and we have made significant financial investment in the two German routes (Dusseldorf & Munich). They haven’t moved to land of milk and honey yet. Hopefully, they will stand on their own two feet in a couple of years and we can be aggressive in terms of growth” he said.

Responding to the issue of a Cork – Dublin service, he noted that “The bottom line is that the infrastructure has overtaken the need for intra-regional flights,” other airlines including Stobart/ Aer Lingus Regional, Ryanair and CityJet similarly had no plans for an air link between Cork and Dublin, he added.

He went on to say that Aer Lingus would strongly support submissions made in favour of approving construction of the M20 Cork-Limerick motorway, in next year’s capital investment plan review, noting that the infrastructure linking Belfast to Dublin, was a driver of Dublin Airport’s growth.

Cork Airport celebrates the granting of Norwegian Air US Licence

One of the reasons why 2016 was such an important year for Cork Airport was the long-awaited announcement that the US Department of Transportation has granted a licence to Norwegian (NAI) to operate the first direct transatlantic flights between Cork and the United States. This was indeed a cause for celebration at the Airport, as it will bring to fruition Norwegian’s plans to launch a new Cork-Boston service, followed by a Cork-New York route subsequently.

Mr. MacCarthy described the announcement as “momentous news for air travellers on both sides of the Atlantic,” which he said, was “great news for Open Skies and for consumer choice and competition”. He added; “I firmly believe this will permanently transform the transatlantic market in Ireland and further afield for the better. Norwegian will do for transatlantic travel what Ryanair has done for European travel, bringing lower fares, increased competition and growth to the overall market”. 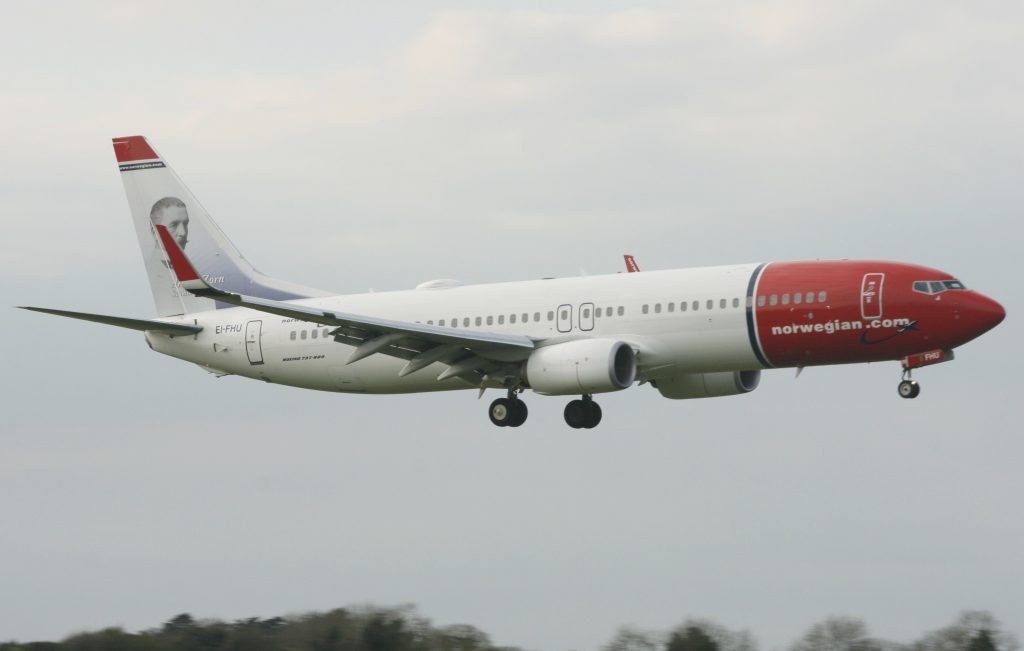 He said that the Airport expected that the Boston bound flights would take off in coming months with New York flights beginning soon afterwards.

“We have had a tremendous twelve months and will finish the year in a very strong position with increased passenger numbers and choice of routes. 2017 is looking very bright indeed and we’re optimistic about what the future holds for Cork Airport,” he concluded.

According to Travel Extra, the decision of the EU Commission to seek arbitration on Norwegian’s application was what pushed the approval over the line. The Americans had 20 days to respond and with a regime change looming with new Transport Secretary Elaine Chao arriving on Capitol Hill, it must have seemed easier to concede the license, for which all arguments against smacked of protectionism. Celebrations can only really start when we see if Norwegian intends to operate a meaningful service out of Cork and Shannon airports, or whether this was just an attempt to establish a bridgehead against a hostile regulatory system, and whether the Cork service was just a testing ground, using the lobbying skills of Irish America to get the flights in the first place.

We understand that following the approval, talks between the airport and NAI explored the possibility of fast-tracking the launch of the New York route, with the hope that tickets could go on sale by March for the Boston service at least, and possibly the New York route too, so they could commence by June. The routes will initially operate with Boeing 737-800 equipment, before transitioning to the Boeing 737MAX, at a later date. Norwegian added that the full plans for Irish transatlantic routes, which will also include flights from Shannon, will be unveiled in early 2017. 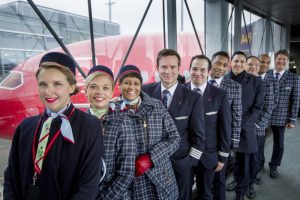 In mid-2017, Norwegian will become the European launch-customer of the Boeing 737-MAX, with six aircraft due for delivery in 2017 – two in May and four in June. NAI currently operates about 50 aircraft on its Irish AOC. It is understood that the new aircraft type will operate transatlantic flights from the North-eastern United States to parts of Europe and open up a range of routes and destinations, currently not served from the US, over the next few years.