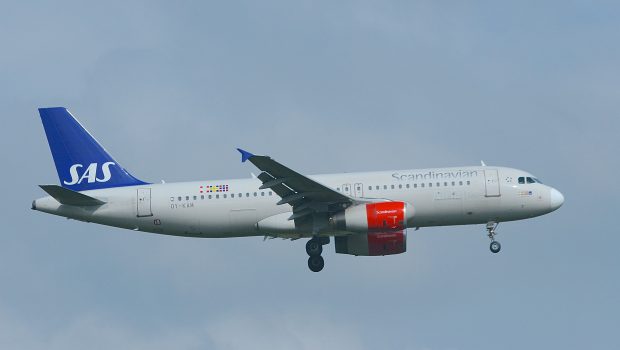 Scandinavian Airlines (SAS), which celebrated its 70th anniversary in August of this year, is continuing to expand and strengthen its holiday destinations on offer to Scandinavian frequent flyers. On 12th October the new SAS summer programme 2017 went on sale as the airline added over 330,000 seats for summer 2017. Altogether, SAS will open 15 new routes next summer opening six new all year routes from Scandinavia. SAS is also increasing flights to Spain, Portugal and Croatia. The new services will be gradually introduced from late March.

SAS is one of the founding members of Star Alliance, one of the world’s largest global airline alliances, currently having 27 member airlines. It is also introducing six new all year routes to popular European destinations for both business and holiday travellers from Scandinavia. The new all year routes are Copenhagen to the Faroe Islands and Riga, from Aalborg to Oslo, from Bergen to Gdansk and from Stockholm to Munich and Krakow.

At the same time, SAS is opening nine new summer season routes from Scandinavia to popular holiday destinations in Southern Europe. SAS customers can look forward to new routes from Copenhagen to Malta and Olbia; from Aarhus to Malaga; from Oslo to Pristina; from Stavanger to Nice; from Kristiansand to Malaga and from Stockholm to Lisbon, Pristina and most importantly from an Irish perspective, Shannon.

Shannon Airport, needless to say, was delighted by the announcement by SAS of the new Stockholm service, which will operate twice a week from 1st August until 7th October 2017. In a comment, Matthew Thomas, CEO, of the Shannon Group said; “We are thrilled to welcome SAS to Shannon and we look forward to working with them to ensure the success of the new service. The new service will not only have a positive impact for inbound tourism for the West of Ireland, but will also provide valuable business connectivity as people using the service will be able to connect at the SAS hub at Stockholm Arlanda Airport for flights to over 22 destinations including Copenhagen, Oslo Helsinki, Gothenburg, Billund, Tallinn, Riga and Vilnius and a host of domestic airports in Sweden.” 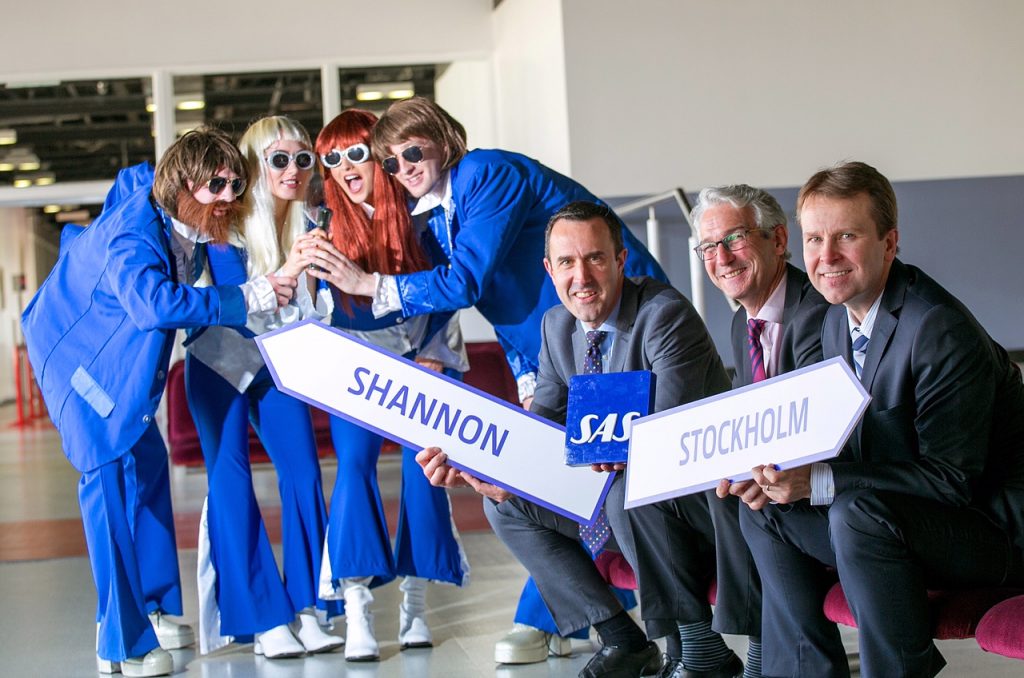 Speaking of SAS’s commitment to Shannon, Alan Sparling, GSA for SAS in Ireland commented: “SAS are currently celebrating 50 years of nonstop flights into Ireland and can think of no better way to start into a sixth decade than by opening a new route between Shannon and Stockholm. SAS has no doubt there will be a very keen interest and uptake for this new route and we look forward to developing this route into the future.” 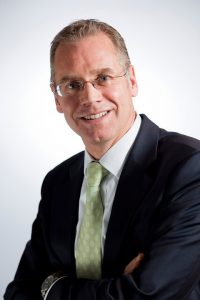 Commenting on the tourism potential of the route Niall Gibbons, CEO of Tourism Ireland, said: “The Nordic Region is an important market for tourism to the island of Ireland, with the latest CSO figures indicating growth of about +3.5% in Nordic visitors to Ireland, for the January to August period.”

“SAS has more departures and destinations than any other Scandinavian airline and we know that our frequent flyers also prefer us when they go on holiday. This is why we have very successfully strengthened what we offer to popular holiday destinations in recent years, something we will continue to do,” added Rickard Gustafson, President and CEO of SAS.

The new service operates on Tuesdays and Saturdays using CRJ900 and Boeing 737-700 aircraft as follows:-

Shannon Airport has direct flights to 35 destinations in 11 countries and is the first airport in the world, outside of the Americas, to offer Full US Pre-clearance facilities to passengers travelling to the USA. SAS currently flies from Dublin to Copenhagen, Oslo and Stockholm.

1st August, 1946 was the starting point which has led to SAS becoming Scandinavia’s preferred airline and initially it came about through the merger of the Norwegian, Danish, and Swedish international airline operations. On 17th September of the same year, 28 specially invited guests gathered for the inaugural flight with SAS’ new DC-4 ‘Dan Viking’ from Stockholm to New York. The journey took 25 hours with intermediate landings in Copenhagen, Prestwick in Scotland and Gander on Newfoundland. The true history of SAS had begun. 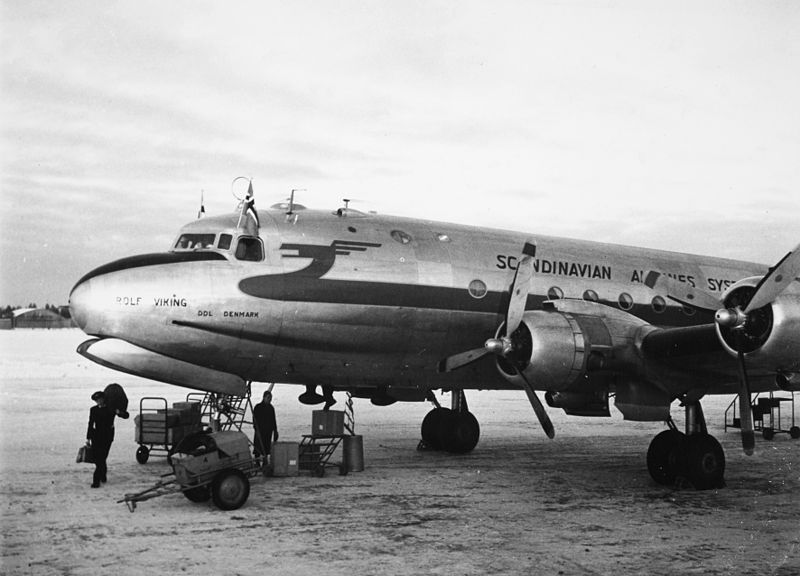 SAS DC-4 OY-DFO getting ready for another flight

Through those seven decades, SAS has launched the world’s first around- the-world service, in-flight entertainment system, tourist class and sleeper seats. SAS was the first airline to offer separate check-in and lounges, and we hired the first female commercial pilot. SAS was also first to implement green approaches, saving aircraft fuel and reducing emissions. These historic examples have paved the way to where it stands today, focused on bringing innovation to its passengers since 1946.

SAS is currently investing in new innovations and smart digital solutions to make travel an easier, faster and more personal experience. Making life easier involves features like upgraded SAS Lounges, new SAS Café Lounges as well as Fast Track. SAS loyalty & frequent flyer program, EuroBonus, was founded in 1992 and now has more than 4.5 million members. EuroBonus members can accumulate points on flights, hotel stays, car rentals and even on everyday purchases. The points can be redeemed at either SAS or its many partners.

SAS Labs is developing some radical new ideas and innovations for the future of travel; from airplane boarding passes contained under your skin to smart and personalised luggage tags. This autumn, all of its cabin crew will be equipped with Cabin Crew Devices. These iPad Minis will make their work easier, as well as giving them the opportunity to give SAS travellers even better service. The devices will make it possible to check such things as the status of luggage transfers, flight connections and EuroBonus membership information.

With a passion and vision to ‘make life easier’ for Scandinavia’s frequent flyers, SAS is making investments of 500 million Swedish Krona (around €51.55 million) across its entire short and medium haul fleet – from installing the fastest WiFi in Europe to completing a full cabin upgrade. By partnering with ViaSat, SAS can offer on-board speeds of 12 Mbps and higher to each passenger, ensuring time spent on-board will be more productive and more enjoyable with streaming TV, music and movies.

SAS environmental vision is to be a part of long-term sustainable society. It believes that it should be possible to fly with no fossil fuel CO2 emissions by 2050. Some of SAS main focus areas are biofuel, fuel efficiency measurements, green flights, and a new more fuel-efficient fleet.

During the last few years SAS has invested in the largest intercontinental expansion in the company’s history to and from USA and Asia. All with SAS new upgraded cabin. In the past twelve months SAS has opened new direct routes from Scandinavia to cities such as Hong Kong, Los Angeles and Boston and will be opening a direct route from both Copenhagen and Oslo to Miami in September. September is also the month SAS will celebrate the first flight between Scandinavia and the US.

“Many of our customers are frequent flyers and we play an important part in the lives of many people. The upgrade we implemented on our long haul aircraft gained a very positive reception and we are now upgrading our short and medium haul fleet, which will also include high-speed WiFi with speeds that enable time on-board to be utilized for work or to relax and enjoy a streamed movie or TV series. As both passengers and crew on-board are now connected, we can take our personal service to greater heights while continuing to develop our digital, smart solutions that make life easier,” according to Mr, Gustafson.

In addition to opening new routes, offering all new cabins, fast track and lounges as part of its programme of continuously improving its product to its customers, SAS about to take delivery of the first of 30 new Airbus A320neo’s, which offer 15-20% lower fuel consumption. The aircraft, A320-251N, LN-RGL (c/n 7290) ex D-AXAF first flew on 10th October, and is scheduled to be operating from October 26th. As part of its fleet of 151 aircraft, SAS currently operate 25 Airbus A320 family aircraft, four A319s, 13 A320s and eight A321s. 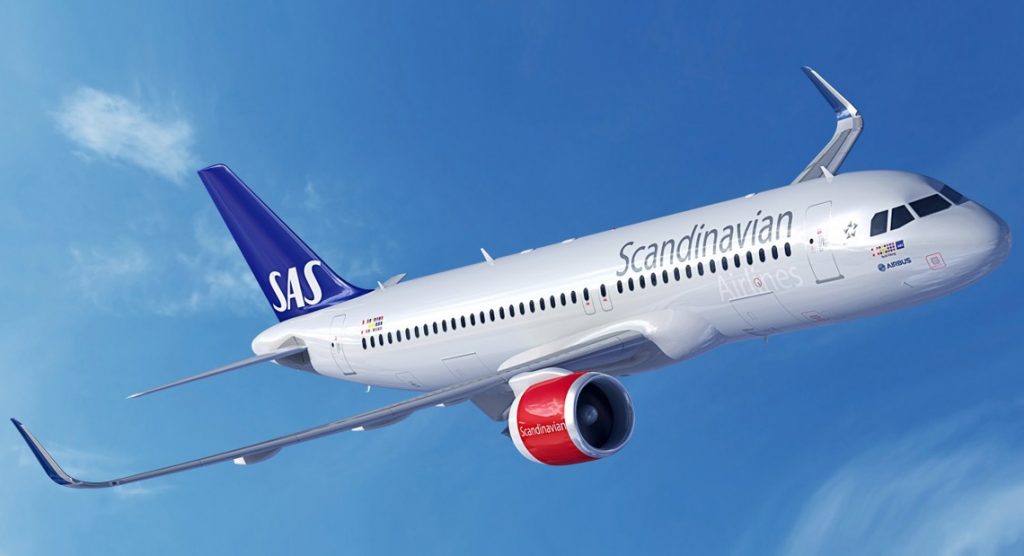 SAS is upgrading its short haul fleets cabin interior for a better overall experience The new A320neo will be the first aircraft with the refreshed cabin interior, which in addition to extra leg room, new and more comfortable seats, a lighting system that aligns with the time of day, it will also offer USB outlets at seats to keep personal devices charged. Another new feature with the SAS version of the cabin is the placement of the aft toilets. Two toilets are placed next to each other towards the aft bulkhead, the lateral one is designed to be more accessible for persons with reduced mobility. The interior design is in line with the new cabin offered on SAS long haul routes, which was launched in 2015. The new interior quickly became very popular with both Scandinavian and international customers.

Part of the upgrade is designed to implement SAS’ commitment to deliver seamless WiFi travel experiences where passengers can access all of their content and information from anywhere: at home, at the airport or on-board. The new on-board high-speed WiFi service gives passenger’s gate-to-gate internet access with the fastest speed available on the market. 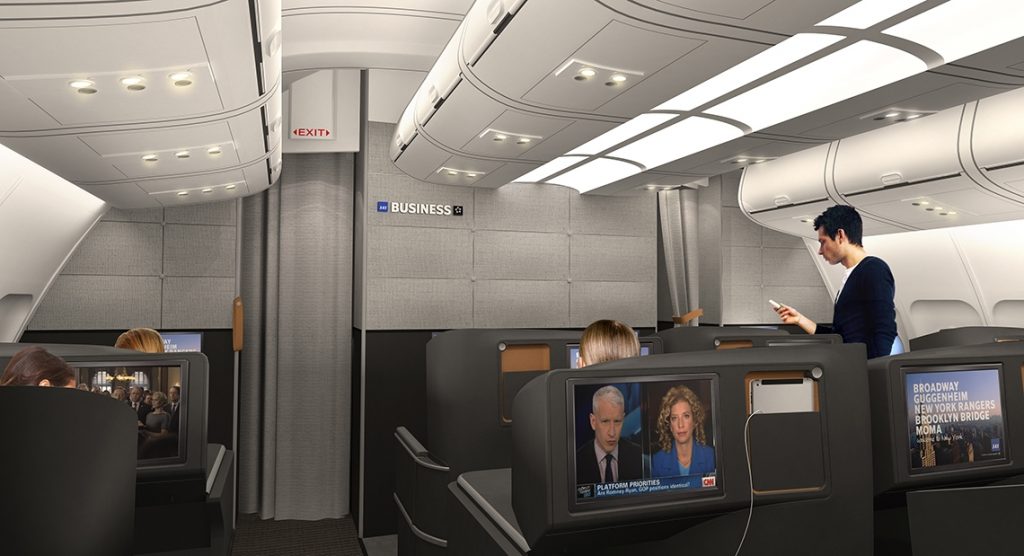 In addition to streaming, social media and traditional workplace applications, passengers can also expect to get better assistance from the cabin crew, which have been recently equipped with iPad Minis that will be connected to the WiFi system. With new high-speed WiFi capabilities SAS crew will be able to access flight and passenger information – before take-off, during the flight and after the flight lands. This includes helping passengers check if their flight is on time to the status of connecting flights, check their EuroBonus account or even book a EuroBonus flight, shop in the EuroBonus store, rent a car, book a taxi to meet them at the airport or even tell SAS crew members what they thought of the service – all while on-board.

The first aircraft with the new WiFi-system will enter service in the second half of 2017. On-board WiFi will be free on short haul flights for all SAS EuroBonus members and SAS Plus ticket holders. 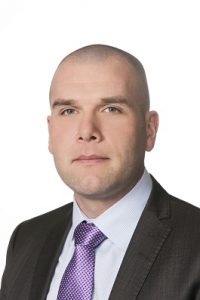 SAS has appointed Niko Ek as its UK Head of Sales & Regional General Manager Europe. Niko started in the role on 1st September and is responsible for leading the UK team, based in London, and Region Europe.

Niko has worked at SAS since 2001, returning to the company following a short break in 2013. With his first role for SAS at Helsinki Airport, Niko has also held positions including Head of Sales in Finland and Norway. He moved to his present role from Head of Sales Operations in Sweden. He succeeds Hans Dyhrfort, who is leaving the position after five years, returning to SAS in Stockholm, for a new position.