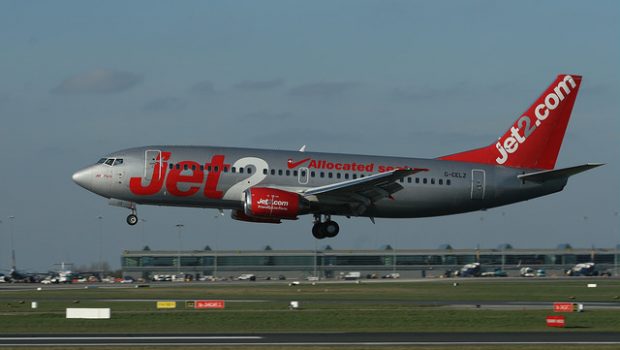 There were celebrations galore at Leeds Bradford Airport on the afternoon of 15th September 2016, following the arrival of Jet2.com’s brand new Boeing 737-8MG (WL) aircraft, G-JZHJ (c/n 63144). The aircraft touched down at the airport for the very first time at 15:20, following a positioning flight, from Seattle Boeing Field, via Gander. The aircraft had departed Boeing Field at 09:33 (local) on 13th September, and after an almost six hour flight, landed in Gander at 20:08 (local). Following a stopover, it departed Gander at 09:12 on 15th September. Flying time to Leeds Bradford was 4 hours 47 minutes. 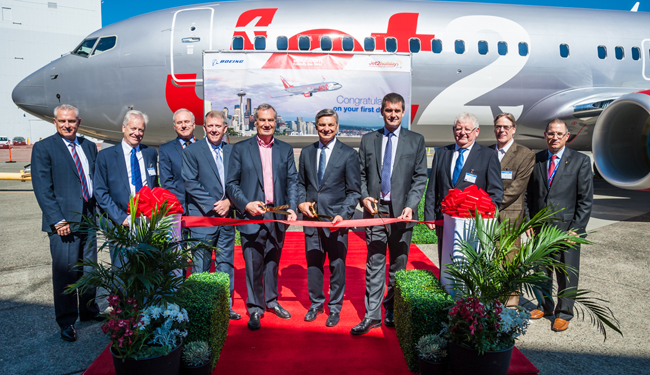 The aircraft is the first of 30 brand new 737-8MG’s to be delivered to Jet2.com and Jet2holidays, due over the next two years. It is expected to come into operation in the next few weeks, after Jet2.com round off the aircraft with a few special finishing touches. It will be operated across the company’s nine UK bases and will take package holiday and flight only customers to sunshine, ski and city destinations. The Boeing 737-800 order has an approximate list price of $2.9 billion (around €2.6 billion); however the company has negotiated significant discounts from this price.

This brand new aircraft, which seats 189 passengers, uses years of research to provide more comfort for passengers, and features the 737 Boeing Sky Interior which includes sculpted sidewalls, a window design that draws passenger’s eyes to the windows, and a cabin design that offers more openness and extra leg room. It can fly approximately 3,000 nautical miles (5,500 km), up to 900 nautical miles more than earlier 737 models and 175 nautical miles (320 kilometres) further than competing aircraft. It also consumes 5% less fuel while carrying more passengers than competing aircraft.

Commenting on the arrival of the new aircraft, Steve Heapy, Chief Executive Officer at Jet2.com and Jet2holidays said; “The arrival of these new aircraft to our successful fleet is a huge milestone in the history of Jet2.com & Jet2holidays and demonstrates how committed we are to investing in growing our business and providing more choice, comfort and quality than ever before to our passengers. As we continue to flourish and fly millions of holidaymakers to more destinations than ever before, these new aircraft will help us to increase our capacity and fulfil our growth ambitions.”

He added that “some of us were in Seattle earlier this week to watch the aircraft take off, and it was a very proud moment watching it land in Leeds Bradford Airport, the very place where our flights began back in 2003”.

Since then, Jet2.com has expanded to become the 4th largest registered airline in the UK, flying over 6 million passengers in the last financial year and providing friendly low fares to 65 sun, city and ski destinations across Europe from its nine UK bases. This includes its latest bases in Birmingham and London Stansted, which both come into operation in 2017. Through Jet2holidays, the company also offers great value ATOL protected package holidays, to over 40 top sun destinations, with thousands of 2-5 star hotels available.

The 30 new aircraft will support the ongoing growth at Jet2.com and Jet2holidays, which has seen the company, launch its biggest ever flights and holidays programme for 2017. It recently announced almost 1,000 roles in pilot, cabin crew and engineering positions in support of this growth. The aircraft will increase the company’s fleet size, whilst also making further product improvements in line with its family friendly ethos, which has recently seen Jet2.com voted the ‘UK’s best airline’ and ‘Most Loved Airline’ by users of TripAdvisor and Skytrax respectively. 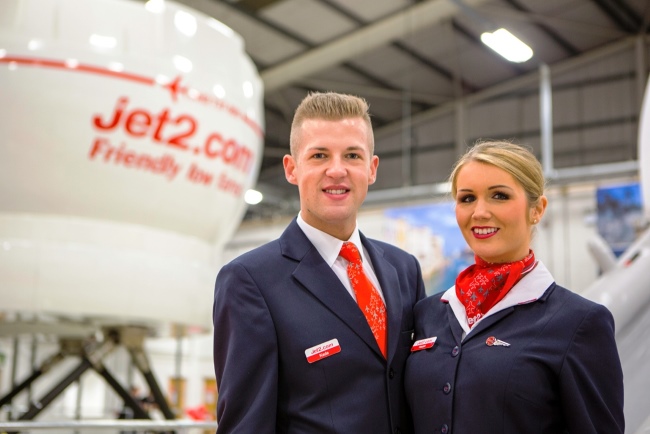 The major recruitment drive announced on 31st August has almost 1,000 pilot, cabin crew and engineering positions available. The airline is looking to recruit Boeing 737 and Boeing 757 Type Rated and Non Type Rated Captains and First Officers, with an existing Commercial or Military background, a strong training record and the commitment, energy and flexibility required. Aspiring Cabin Crew members will be passionate about customer service with a positive and flexible approach to work to ensure the customers always receive a truly VIP service when flying with Jet2.com. The airlines also has vacancies outside of the cockpit, Engineers are required at the various bases 24/7, to ensure flights continue to operate safely. The airline’s EA 145 Maintenance Approval covers both Line and Base Maintenance and experienced Engineers also work in office based roles, including Powerplant, Technical Services, Airworthiness and Maintenance Programmes.

In a comment Mr Keddie said: “50 additional jobs will mean in the region of £1 million (around €1.17 million) to the South Antrim and the wider regional economy. Jet2.com has a solid track record of growth and here’s just one of the tangible benefits you can see when an airline expands. 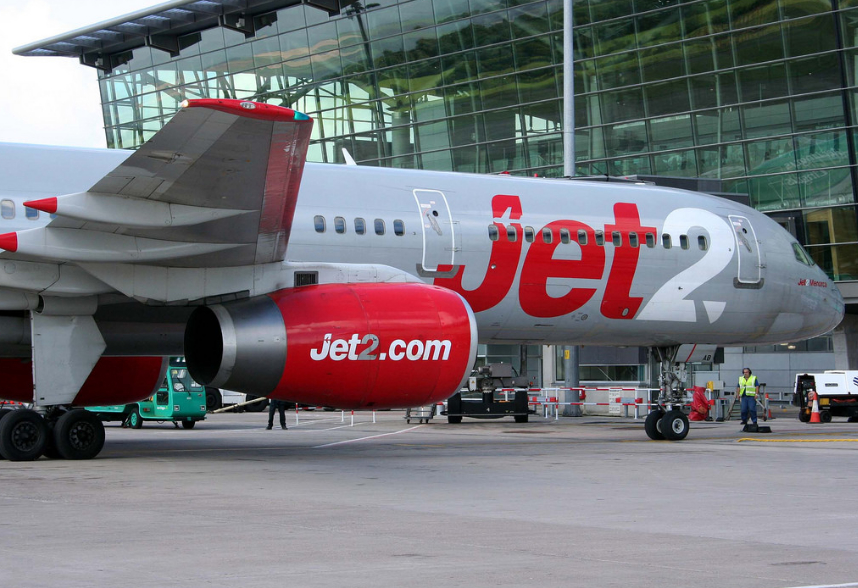 “The 50 new posts will bring to 800 the total number of new jobs announced at Belfast International within a ten-month period. We anticipate further employment announcements as passenger number continue to increase.

“Jet2.com is a valued partner airline with the potential to grow even further. As an airport, we will do all we can to facilitate the airline.”

With effect from 8th August, as part of its commitment to tackle disruptive and abusive behaviour by passengers, the airline is banning the sale of alcohol on-board on all its morning flights, before 08:00 BST. Following this ground- breaking move, Jet2.com has called for airports and retailers to follow its lead to trade responsibly and similarly ban alcohol sales before 08:00 BST. The airline has also encouraged industry partners to support the call for fully sealed bags for alcohol purchased in airports, to prohibit the illegal consumption of personal alcohol, before and during flights.

In a comment, Phil Ward, managing director of Jet2.com said: “We have decided to take positive action to allow the millions of customers and families who fly with us to travel with confidence and have a great experience with Jet2.com. We believe that stopping sales of alcohol before 08:00 BST on our morning flights is an effective way to ensure everyone has an enjoyable and comfortable journey. We understand that we’re the first of the European airlines to take this bold step and call upon industry partners in airports to also trade responsibly.”

The announcement further supports the airlines’ ‘Onboard Together’ campaign which aims to reduce incidences of disruptive behaviour on its flights. The initiative has seen more than 500 passengers refused travel, with over 60 of these given lifetime bans, since it was launched in 2015.

Jet2.com’s ‘Onboard Together’ initiative commits the airline to a zero tolerance stance against disruptive passenger behaviour, including prosecution of those involved in disruptive, abusive or drunken outbursts on-board.

One such passenger was Joshua Strickland, a 21 year old from York, who’s abusive and aggressive behaviour forced Jet2.com to divert a flight from Leeds Bradford to Manchester in July. He had been consuming his own alcohol illicitly on the Larnaca bound flight, not only threatened a family but also verbally abused a cabin crew member. The leading leisure airline made the immediate decision to divert into Manchester where he was arrested and charged by Greater Manchester Police.

Mr, Strickland appeared at Manchester Crown Court on 25th August, where he pleaded guilty to being drunk on-board an aircraft and received the six month jail sentence. In addition, Jet2.com is vigorously pursuing him to recover £10,300 (around €12,016.50) for the costs incurred by this unnecessary divert and has issued him with a lifetime ban.

“We are thrilled with the decision by Manchester Crown Court” said Phil Ward, adding that Joshua Strickland’s “violent outburst was absolutely unacceptable and caused a lot of distress plus significant delays for our customers”. He added that “passengers should be in no doubt that the consequences of abusive and unruly behaviour on-board aircraft do lead to custodial and financial penalties.”

As part of its product improvements and in line with its family friendly ethos, Jet2CityBreaks announced that, from 20th July, its market-leading 22kg baggage allowance, would be offered completely free of charge to customers booking city break packages, to any of its 30 city break destinations, (excluding New York and dedicated Christmas Market trips). 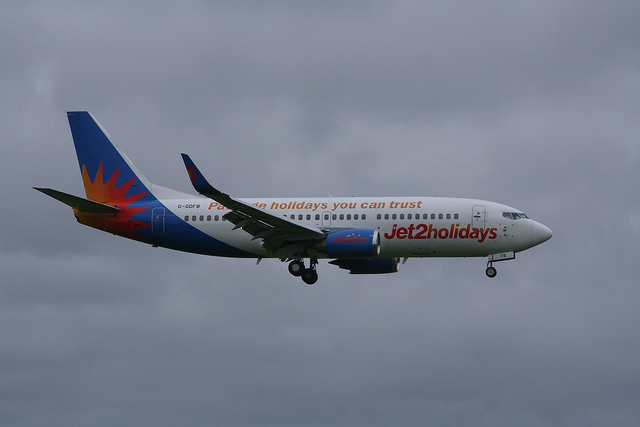 The decision allows customers booking with Jet2CityBreaks to get up to a third more allowance than other airlines for extra outfits, souvenirs and other city break essentials – but totally free of charge. This free hold baggage is in addition to the 10kg of free hand baggage allowance that Jet2CityBreaks already provides. The announcement comes on the back of Jet2holidays including 22kg baggage allowance free of charge as part of its holiday packages.

In a comment, Alan Cross, Head of Trade at Jet2holidays said: “We are renowned for offering a market-leading 22kg baggage allowance. Customers taking city breaks have told us that having so much baggage allowance makes a big difference, so we want to make their city break even more enjoyable by providing that allowance free of charge”.

Finally, on 8th September, in advance of the Annual General Meeting of the Dart Group, (a holding company based in the grounds of Leeds/Bradford Airport, where its subsidiary Jet2.com has its head office in the same building), Philip Meeson, Group Chairman and Chief Executive, made the following statement.

In the statement he said: “The good start to the financial year as reported in our Preliminary Results Statement of 14th July 2016 has continued, with summer Leisure Travel bookings showing no signs of slowdown. Demand for our higher margin package holiday products continues to grow and as a result the number of package holiday customers, as a proportion of total departing customers, is also increasing. Though airline ticket yields and load factors are slightly lower than those achieved in summer 2015, this is against a backdrop of a 13% increase in seat capacity. Leisure Travel bookings for winter 2016/17 are satisfactory at this early stage. 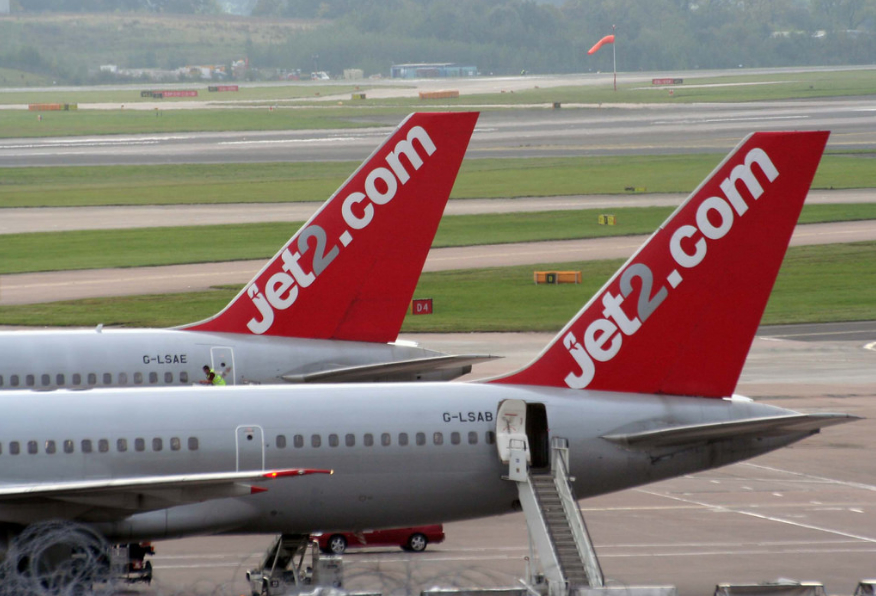 Continued encouraging progress is being made at Fowler Welch, our Distribution & Logistics business, which is currently trading in line with expectations.

In view of the significant investment which will be committed in the second half of this financial year to launch our London Stansted and recently announced Birmingham Airport bases, it is likely that Group operating profit will be slightly behind current market expectations despite the good trading performance achieved in the year to date.”

The Group will provide a further update when it announces its interim results for the six months ending 30 September 2016 on 17th November 2016”. 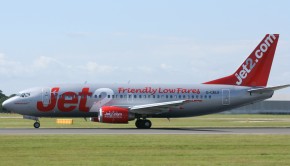 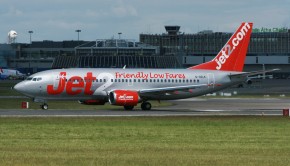