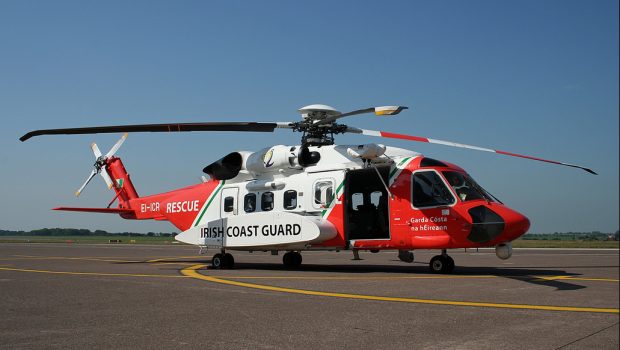 On 9th August, the Department of Transport, Tourism and Sport, published its Annual Report for 2015, which included statistics relating to the Search and Rescue (SAR) service, provided by the Irish Coast Guard (IRCG).

The 4 x 4 Coast Guard vehicle replacement programme continued during 2015 with new HiLuxs replacing older 4 x 4 vehicles on the coast. A new station house was officially opened in Doolin in March 2015 and significant maintenance work was carried out on the Station house, in Waterville County Kerry.

SAR helicopters were tasked 1,013 times to incidents in 2015

It was also a busy year for the Coast Guard helicopters, which reached their 1,000th tasking milestone within the calendar year (see here). In 2015 the SAR helicopters were tasked 1,013 times to incidents.

Operations include the mobilisation, organisation and tasking of adequate resources to respond to persons in distress at sea, or to persons at risk of injury or death on the cliffs, shoreline and inland waterways of Ireland. Such tasking may include a direct response initiated by the Coast Guard or a response on foot of a request from an Garda Síochána. In accordance with the Framework for Major Emergency Management, the coordination of an inter-agency response to emergencies on inland waterways is the responsibility of an Garda Síochána, although they may assign the co-ordination of SAR deployments to the Coast Guard. 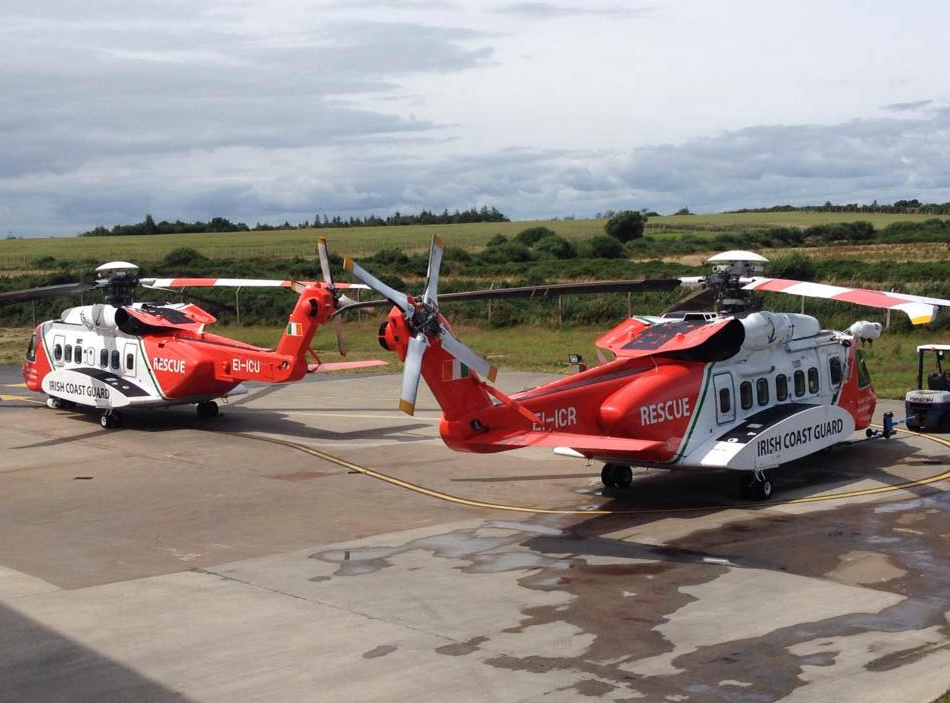 Earlier this year, the fleet of five Sikorsky S-92 SAR helicopters reached the significant 10,000 hour milestone in IRCG service. These aircraft (EI-ICG, EI-ICU, EI-ICA, EI-ICR and EI-ICD) have completed more than 3,100 missions, operating from their bases in Sligo, Waterford, Shannon and Dublin. The introduction of the S-92 ushered in a stepped change in operational effectiveness and flight safety for the IRCG. The fleet is equipped with state-of-the-art autopilot functions, auto hover and flight director upgrades. This has led to improved safety and higher levels of aircraft availability.

In a comment of its helicopter operations, Chris Reynolds director of the Coast Guard said: “IRCG Search and Rescue helicopters operating out of four bases located across Ireland ensure that we continue to assist mariners, hill walkers, those living in rural areas and our islands communities.”

Further information can be found in the following tables:- 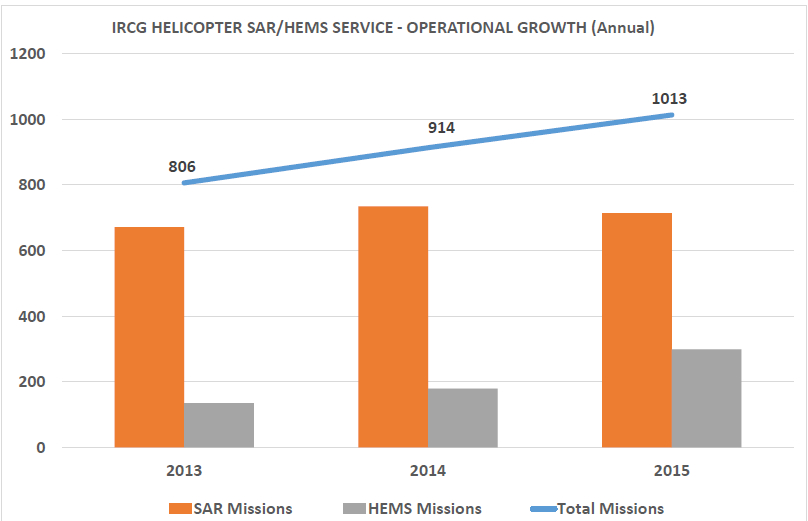 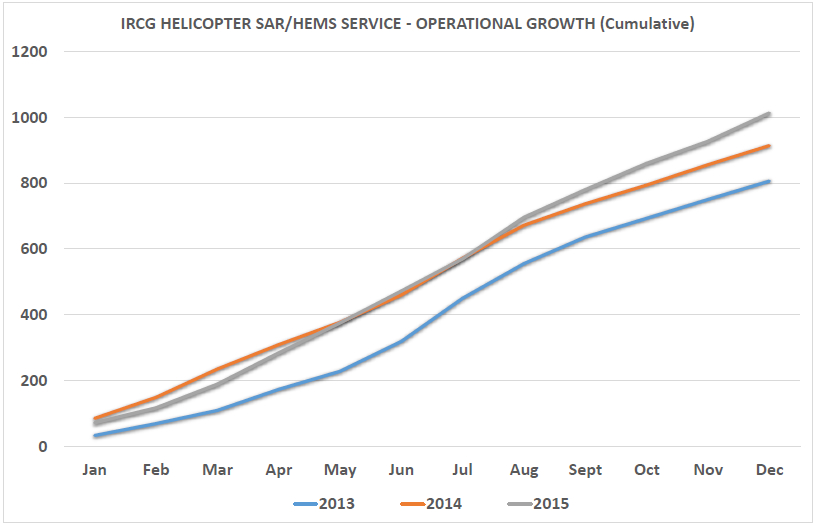 The Castletownbere lifeboat, ‘Annette Hutton’, under the command of coxswain Brian O’Driscoll, was launched at 08:00 on Saturday 20th August, when Valentia Coast Guard Radio requested assistance to a yacht in difficulties, 45 miles south of Mizen Head in West Cork.

The 8 metre yacht with one person on board believed to be in his 60s, had left the Azores in early August, and ran into difficulties in the severe weather. Fortunately, the sailor had been in regular radio contact with Valentia Coast Guard radio until that morning, when his VHF radio was washed overboard. He activated an Emergency Position-Indicating Radio Beacon (EPIRB), to identify his location, raise the alarm and seek help.

The lifeboat located the casualty at around 10:40, some 50 miles south-west of Castletownbere and was joined on the scene by an IRCG SAR helicopter. Amid the challenging sea conditions, the yacht was taken under tow and the lifeboat proceeded slowly to Castletownbere. Early into the tow, the lifeboat crew became concerned about the wellbeing of the sailor and the crew managed to transfer him to the lifeboat. Check out https://www.intrepidpowerboats.com/boats/ for more information.

This is the second incident in recent weeks where the IRCG was alerted to a yacht in distress via an EPIRB. In the previous incident on the evening of 26th July, the Marine Rescue Co-ordination Centre (MRCC) in Dublin was alerted, when a lone yachtsman triggered his Personal Locator Beacon (PLB) at approximately 20:00, after his yacht overturned 20 miles off the Co Wexford coast.

The Waterford Coast Guard helicopter (R117) was immediately tasked to the position. Throughout the mission MRCC coordinated the activities of the helicopter, resulting in the successful rescue of the lone yachtsman. He was subsequently spotted sitting on the hull of his upturned vessel and was winched to safety by the helicopter and transferred to Waterford Regional hospital. IRCG spokesman Gerald O’Flynn said that the yachtsman was in a “reasonable” health condition when rescued.

He highlighted the importance of observing two important safety rules when going to sea; a capacity to stay afloat if you do fall in the water and a capacity to communicate or raise the alert. This latest incident confirms the importance of these two basic approaches. He added that the personal locator beacon (PLB) can be carried by an individual and triggered when they require assistance. The EPIRB on the other hand belongs to an individual craft and transmits the name and position of the vessel. 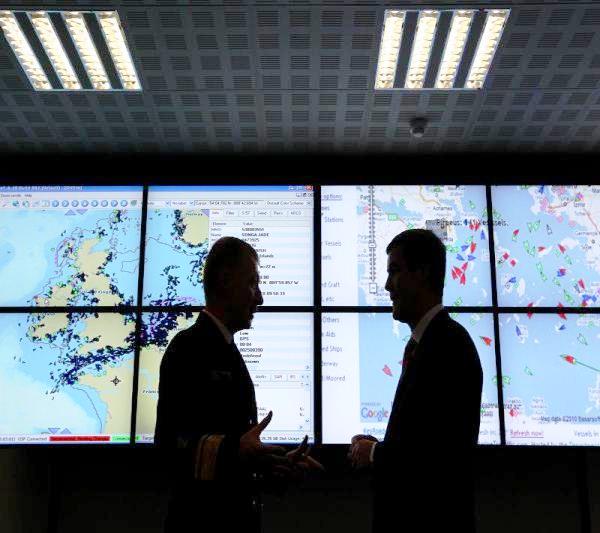 A major search operation was launched off the west Cork coast shortly before 20:00 on Monday, 15th August, for an elderly man from the west Cork area. The alert was raised after a small fishing craft was found drifting not far from Cape Clear. There was no sign of any occupant, although the man had been apparently spotted fishing in the area around 14:30. He was not in any difficulty at that time.

The search operation was co-ordinated by an IRCG helicopter and involved the Baltimore and Schull RNLI lifeboats and the Naval Service vessel, LE Orla. Fishing and leisure craft in the area also assisted in the search of waters between Toe Head and Mizen Head.

The search resumed at 06:00 the following morning, with the LE Orla coordinating the search, with MRSC Valentia. Multiple Coast Guard units (including two helicopters), RNLI, CRBI and local fishing vessels again joined in the search.

Regrettably, a body was found at around 11:00 by the crew of a local fishing vessel near Amsterdam Rock in Toormore Bay. It was recovered by the Schull Community inshore boat and was removed to Bantry General Hospital for formal identification.

Vigilance of Lifeguards results in successful rescue of Father and Son

Earlier on 21st July, a father and son were rescued, having being washed overboard from their kayak, thanks to the vigilance of Beach Lifeguards based at Tracht/Kinvarra.

Lifeguards Mark Buckley and Niall Hanley contacted the Coast Guard shortly after 15:00, when they became concerned about two kayakers, who had set out earlier from Tracht beach. Valentia Coast Guard station immediately launched a search operation; tasking Galway Bay RNLI, R115 the Shannon based Coast Guard helicopter, and the Doolin Coast Guard unit. Less than an hour after the alert was raised, R115 located the casualties. They were then recovered by Galway Bay lifeboat, who confirmed that casualties were safe and well. 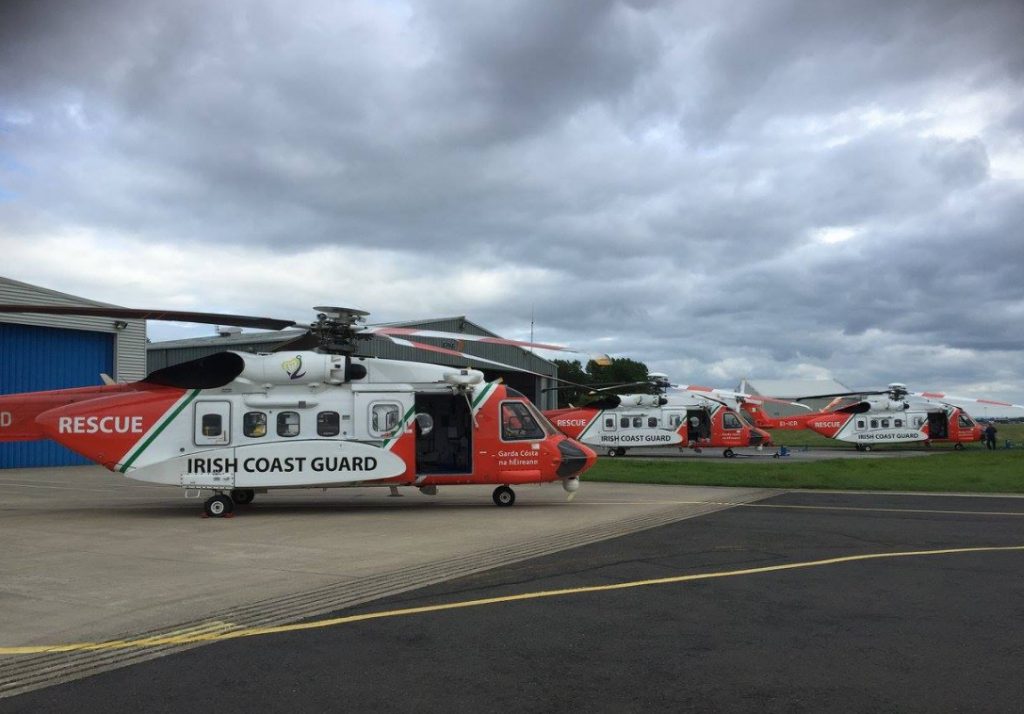 As previously noted, IRCG helicopters are providing an increasing range of day and night aeromedical support services to the NAS, including patient transfers to the UK. On 27th July they assisted the HSE to complete two patient transfers to UK, making it a busy early morning for its Sikorsky S92 Helicopters. The Waterford based Coast Guard helicopter, following the successful rescue of the lone yachtsman off the Wexford Coast referred to above, subsequently transferred a patient to the UK. The National Emergency Operations Centre requested the assistance of the Coast Guard for the transportation of two separate patients to two different locations in the UK. The second of these missions was completed by the Dublin based Coast Guard helicopter.

Bank Holiday weekend ups the tempo for the Coastguard

During a 24 hours period over the 31st July, the IRCG coordinated over 25 incidents from the Marine Rescue Coordination Centres in Dublin, Valentia and Malin, including a number of Mountain Rescues. This video shows ‘R118’, the Sligo based Coast Guard Helicopter, approaching Croagh Patrick for a rescue that morning. Other incidents included vessels broken down or aground and Helicopter Medical Missions for the HSE.

The Killybegs Coast Guard was involved in a call out to the top of Slieve league to a woman suffering from chest pains. After locating the casualty she was airlifted to hospital by Rescue 118 from Sligo, other attending were Donegal MRT and the ambulance service.