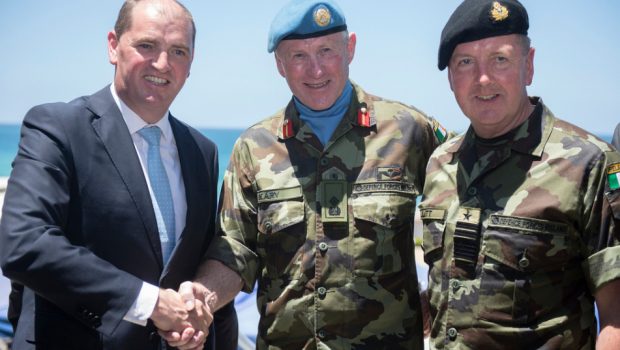 On 19th July, Minister of State with Special Responsibility for Defence, Mr. Paul Kehoe TD, and Chief of Staff of the Defence Forces, Vice Admiral Mark Mellett, attended the transfer of authority ceremony as Major General Michael Beary, assumed command of the United Nations Interim Mission in Lebanon (UNIFIL), at Force Headquarters, Naquora, Lebanon. This followed the appointment of Major General Beary, as the Head of Mission and Force Commander of UNIFIL, by e United Nations Secretary-General Ban Ki-moon, which was announced on the 27th May,

Major General Beary will take over command of approximately 10,500 uniformed personnel from over 40 countries (see table below), with a land, maritime and air component, including an Irish Infantry Group of almost 200 personnel. This will increase to 360 personnel in November. He replaces Major General Luciano Portolano of Italy, who took up the post on 24th July 2014. Major General Portolano joined the Italian army in September 1981 and from September 2012 he served as the Deputy Chief of Staff for Joint Operations in the Italian Armed Forces. Previously, he was the Commander of Italy’s ‘Sassari’ Mechanised Brigade, prior to serving as the Commander of the International Security Assistance Force (ISAF) Regional Command West, in Afghanistan. He previously served as Commander in Iraq, Kosovo, and the former Yugoslav Republic of Macedonia and has served as a Military Observer with the United Nations Iraq Kuwait Observation Mission and the United Nations Iran Iraq Observation Group, between 1990 and 1992. He was also Military Attaché at the Italian Embassy in the United Kingdom. 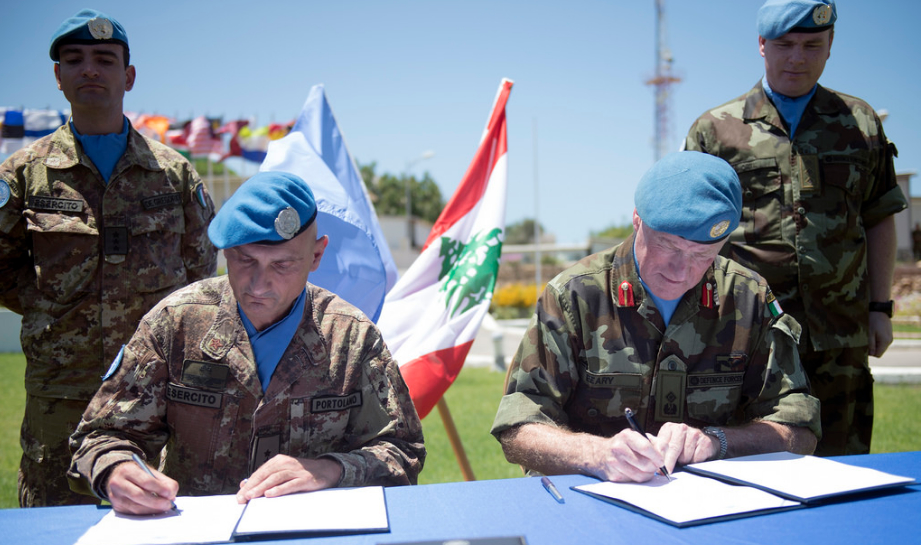 Major General Beary also has impressive qualifications, which make him most suitable for this important mission. He has extensive overseas experience, recently serving as the Head of Mission of the EU Training Mission Somalia, from August 2011 to February 2013. He was also seconded to the General Secretariat of the Council of the EU, where he served three years in the EU Military Staff Division and served on three previous deployments to South Lebanon with UNIFIL, including appointments as Company Commander and Staff Officer in Operations Branch, UNIFIL HQ. He has also served as part of the United Nations Iraq-Kuwait Observation Mission (UNIKOM) and in Bosnia & Herzegovina with United Nations Protection Force (UNPROFOR). In 2003, he completed a four-month tour of duty in HQ ISAF in Afghanistan.

Originally, UNIFIL was created by the Security Council in March 1978 to confirm Israeli withdrawal from the Lebanon, restore international peace and security and assist the Lebanese Government in restoring its effective authority in the area. The mandate had to be adjusted twice, due to the developments in 1982 and 2000.

Following the July/August 2006 crisis, the Council enhanced the Force and decided that in addition to the original mandate, it would, among other things, monitor the cessation of hostilities; accompany and support the Lebanese armed forces as they deploy throughout the south of Lebanon; and extend its assistance to help ensure humanitarian access to civilian populations and the voluntary and safe return of displaced persons.

Following the transfer of authority ceremony, Minister Kehoe and Vice Admiral Mark Mellett visited members of the Irish 53rd Infantry Group, based in South Lebanon. They visited the headquarters of the Finnish/Irish Battalion (UN Post 2.45) and UN Post 6.52 on the ‘Blue Line’, where they met with Irish troops and received a briefing on the mission area, from the Group commander, Lt Col Stephen Ryan, during the visit.

The Irish unit are drawn primarily from James Stephens Barracks in Kilkenny and are currently completing a six-month tour of duty in UNIFIL. Their mission involves extensive mobile patrolling throughout the area of operations, ground holding and monitoring the ‘Blue Line’ between Lebanon and Israel. 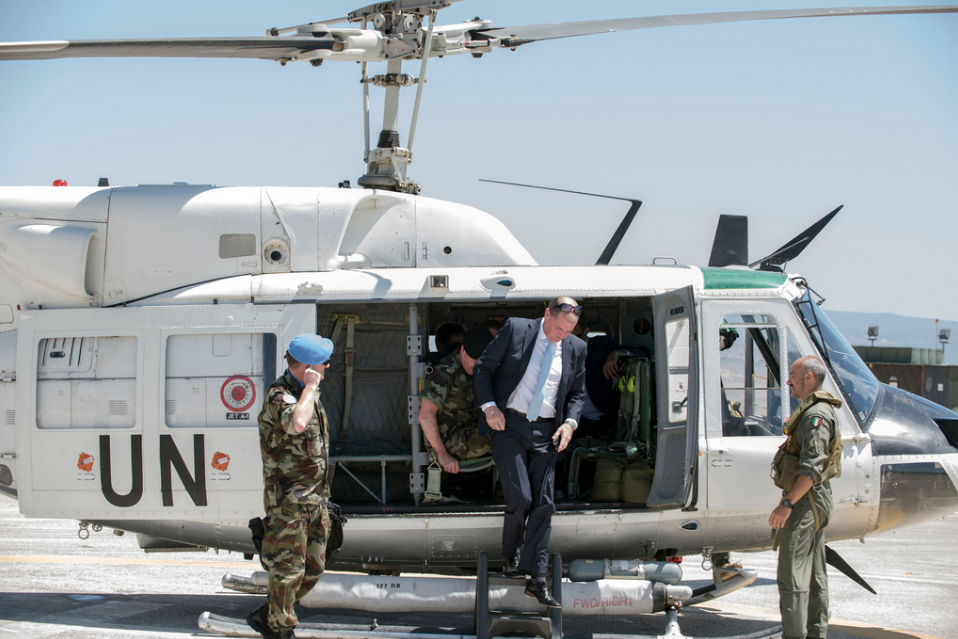 During their visit, the Minister and the Chief of Staff travelled on board Agusta Bell 212 helicopter.’277’, one of five in service with ITALAIR, or Italian Air, which is one of the oldest units in UNIFIL. This Italian unit was established in 1979, just one year after UNIFIL itself was established, After the July 2006 war in South Lebanon and the adoption of Security Council Resolution 1701, ITALAIR became a task force and is currently composed of Italian Army Aviation aircraft with Navy and Air Force crews.

The ITALAIR task force operates directly under the UNIFIL Force Commander and has two types of flight assets, in two divverent configurations, ready to operate in the mission area on a daily basis. One is in a multi-task configuration, prepared to transport passengers, conducts air patrols over the area of operations, conduct observations and reconnaissance along the ‘Blue Line’, and, if requested, assist fire-fighting operations, in cooperation with the Lebanese Armed Forces.

The other is emergency medical transport, which is one of the most important services performed by Italian soldiers in Naqoura, throughout the area of operations. The flight crews guarantee every day, 24/7, a helicopter ready to take off in 30 minutes for this purpose and a second one for various general purposes tasks such as carrying out daily reconnaissance missions, patrolling and transport. In the 37 years of service, ITALAIR has performed more than 39,000 hours of flying in the skies of Lebanon and Israel, with over 1700 transports of sick or injured people, as well as carrying more than 145,000 passengers on its transport operations.