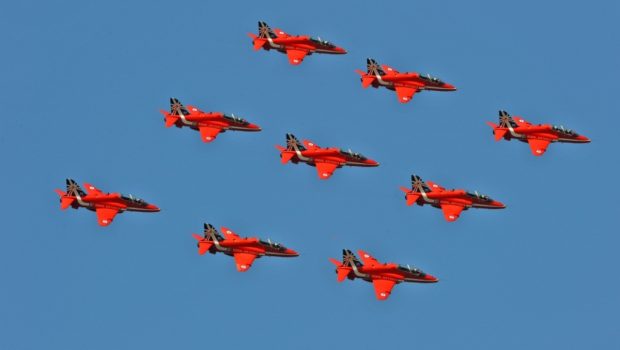 In a brief statement on 15th June, the Red Arrows, the Royal Air Force Aerobatic Team, confirmed that the team will not carry out its aerobatic display, during this July’s Farnborough air show. It noted that, the high speed and dynamic nature of the traditional Red Arrows’ display “is no longer appropriate due to the large amounts of local housing, business areas and major transport links underneath the planned display area”. 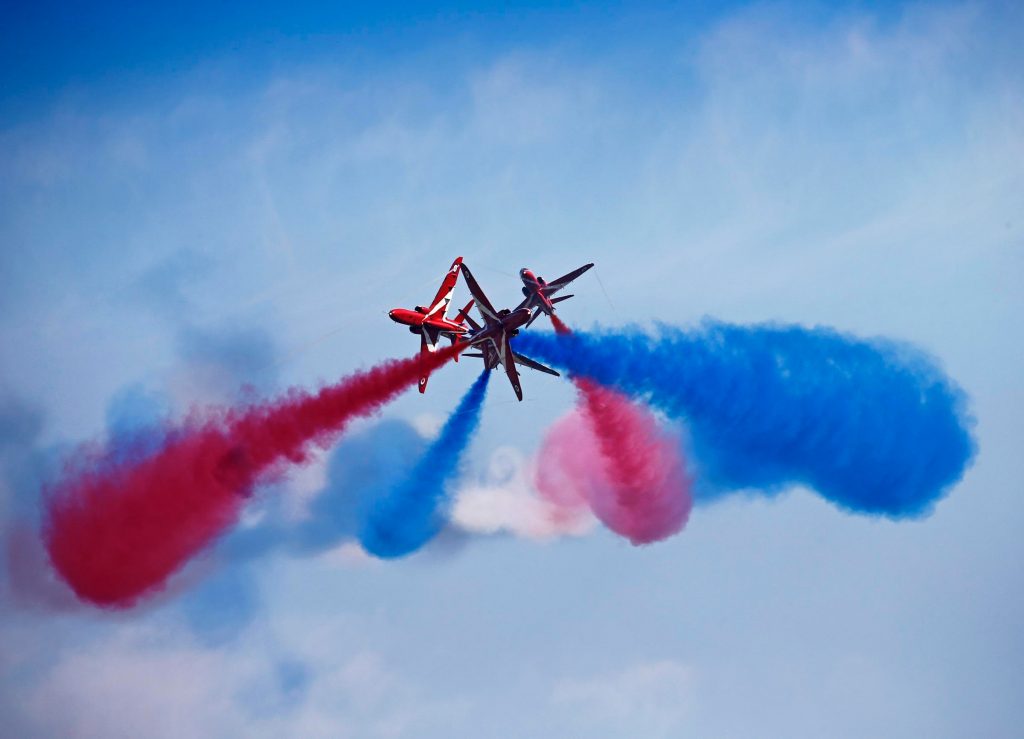 This is the first time in living memory, that the UK’s iconic Farnborough air show will not feature the energetic and spectacular aerobatic display of skill, that inspires such pride in the Royal Air Force, by its citizens. The Red Arrows’ full display involves aircraft passing some 4.5m (15ft) apart and with a closing speed of 740kt (1,370km/h) between aircraft. Its Hawk jets can also be as low as 50-100ft above treetop height in front of a crowd. In spite of not carrying out the traditional aerobatic display, the team emphasise that they will be flying at the Farnborough International Airshow and engaging, with both adults and young people, on all three days that are open to the general public.

The decision is perhaps understandable, amid the concerns raised, regarding the safety of high-speed displays, over populated areas, in the wake of the fatal crash of a Hawker Hunter, at the Shoreham air show, last August and recent incidents involving premier international display teams the Russian Knights, the Patrouille de Suisse, the USAF Thunderbirds and the US Navy (USN) team, the Blue Angels. Fortunately none of these recent events involved spectators but are nevertheless significant.

Speaking to the media in Whitehall on 15th June, Air Vice-Marshal Andy Turner, the RAF’s air officer commanding and chief of staff for training, added further clarification noting; “In Farnborough there has been for many years a growth in the urbanisation of the region, and some changes to the domestic population, transport infrastructure and some of the businesses,” Turner says. “This has led us to recalculate what we think is a safe, sensible and appropriate display of the Red Arrows in the region, and our judgement is that it is no longer tolerable.”

While the UK Civil Aviation Authority have imposed tighter restrictions on aerobatic displays following the Shoreham disaster, Air Vice-Marshal Turner said that RAF had also “reviewed, refreshed and revitalised” its analysis around “what we think is the public appetite for such activities” – and how this has changed over the 50 years since the Red Arrows was formed. 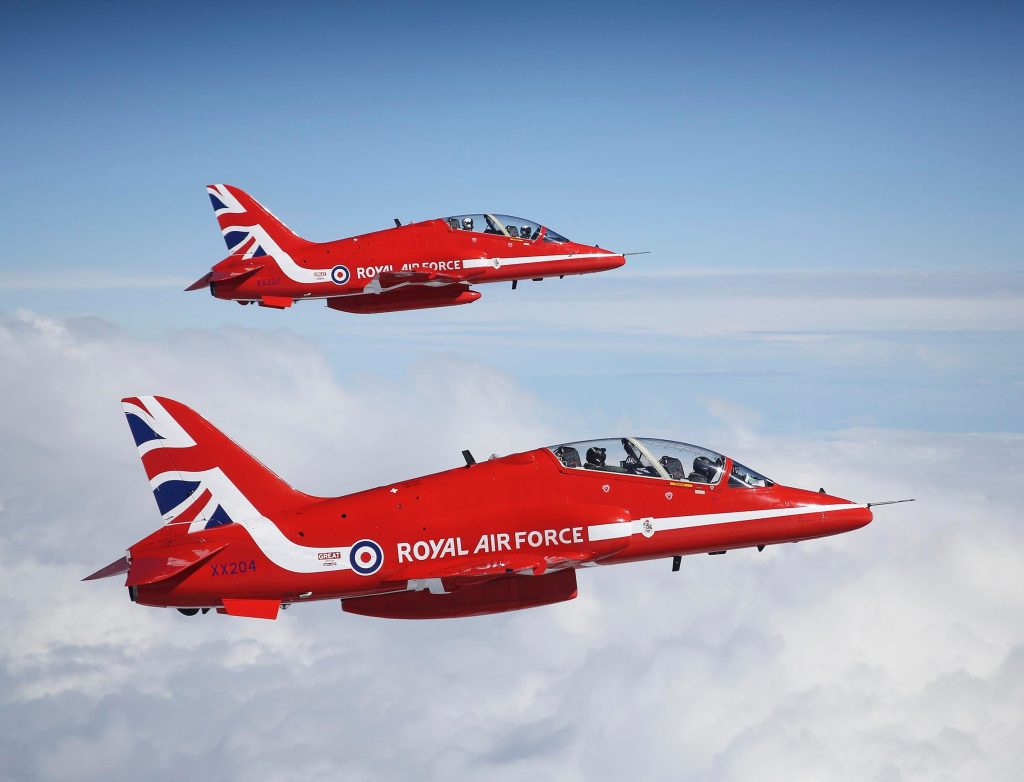 This analysis was as much about the “geographical dispersion” of the area, as the manoeuvres involved, and in the majority of cases, “there are no difficulties whatsoever with the terrain to the front of the crowd,” that the team display at. Nevertheless, two planned Red Arrows appearances have been cancelled since Shoreham; the Dartmouth Regatta last August and the Fowey Royal Regatta in March.

However, for the remainder of the 2016 display season, the Red Arrows are looking forward to displaying as usual at about 100 displays all over the UK and abroad. This includes an afternoon visit to the Bray Air Display on 24th July.

For those visiting the 2016 Farnborough International Airshow, Air Vice-Marshal Turner confirmed that in addition to the Red Arrows flypast with the new F35 Lightning II aircraft, on 11th July, further Red Arrows flypasts, in different formations are now planned for 15th, 16th and 17th July. “Other things we are talking about that might be possible include other formation displays with the Red Arrows, which could include the [Lockheed] C-130, [Airbus] A400M or [A330] Voyager, and we are in negotiations with Airbus to look at doing something similar with the A350,” he added.

These additional flypasts, together with more exciting opportunities for the public to engage with the Red Arrows team on the ground, and other RAF air and ground displays, will ensure the Airshow remains a truly exciting, inspirational and entertaining family event.

There have been four significant incidents since the 2nd of June, involving major international display teams. On 2nd June at approximately 15:00 (CDT), a McDonnell-Douglas F/A-18C Hornet, ‘163455/6’, of the US Navy (USN) Flight Demonstration Squadron, the Blue Angels, crashed during the beginning stages of an afternoon practice at the Smyrna, Tennessee, airport. The aircraft apparently impacted powerlines and came down in open field terrain off the departure end of Runway 14. The aircraft was destroyed by the impact and post-impact fire, and the sole pilot on-board, Captain Jeff Kuss, received fatal injuries. U.S. Marine Corps pilot Captain Kuss, of Durango, Colorado, served as the opposing solo pilot. This was his second year on the team and his first year as a demonstration pilot. His CO speaks here at a press conference in Durango, Colorado prior to the pilots funeral. 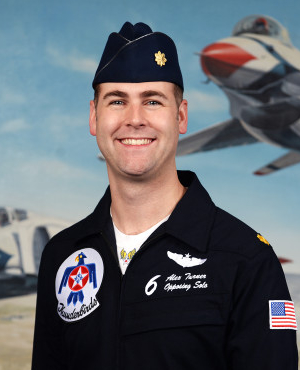 Major Alex Turner of The Thunderbirds

On the same day, at approximately 13:15, a F-16CM Fighting Falcon, ‘92-3888/6’, of the USAF Thunderbirds display team, force landed in high desert terrain, south of Peterson Air Force Base, Colorado Springs, Colorado, during a flyover in celebration of an Air Force Academy graduation. The pilot, Major Alex Turner, ejected safely and was recovered by first responders. The aircraft sustained substantial damage, however, no one was hurt on the ground and there was no hazard to the public. Major Turner is the Opposing Solo Pilot for the U.S. Air Force Air Demonstration Squadron, flying the No. 6 aircraft. Before joining the Thunderbirds, Major Turner served as an F-16 instructor pilot at Hill AFB, UT. He has logged over 1,200 flight hours as an Air Force pilot, with more than 270 combat hours over Libya and Iraq. Major Turner is in his first season with the team and hails from Chelmsford, MA. After the accident, he was able to walk, but was taken to hospital and subsequently released. “The cause of the mishap is currently under investigation,” said Brigadier General. Jeannie Leavitt, 57th Wing Commander. “Major Turner’s ability to steer the aircraft away from any populated areas and safely eject speaks to the quality of his training.” The team was stood down following this mishap, but has since resumed flying. See video showing aircraft and statement from Lt. Colonel Christopher Hammond here. 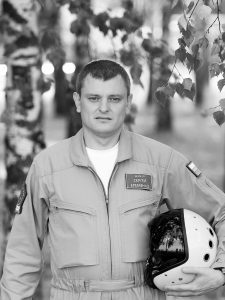 On 9th June at approximately 10:25, a Sukhoi Su-27 ‘Flanker’, described as ‘number 15’, of the Russian Knights Aerobatic Squadron, crashed after a suspected technical problem, while returning to Kubinka air base. The aircraft had been involved in a scheduled demonstration flight, at the unveiling ceremony of a monument to Aviators of Russia, in the Ashukino village of Pushkin district, Moscow region. The pilot, Guard’s Major Sergey Alexandrovich Eremenko, squadron leader of the Russian Knights team, lost his life while trying to steer the aircraft away from the populated area. His aircraft was completely destroyed by the impact and post-impact fire, see here. Major Eremenko was born on 4th September 1981 in Zernograd city and graduated from the Krasnodar Air Force Institute in 2003. He has performed aerobatics since 2011 and has flown various types such as the Yak-52, L-39, MiG-29, and Su-27. Major Eremenko left behind a wife and two small daughters. 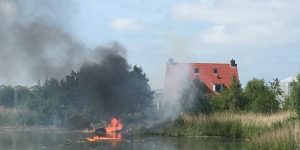 Finally, on the same day (9th June), at approximately 16:15, an Northrop F-5E Tiger II, ‘J-3086’ of Swiss Air Force display team ‘Patrouille de Suisse’, was involved in a mid-air collision with J-3088, while practicing for the Royal Netherlands Air Force Open Days, at Leeuwarden Air Base in the Netherlands. According to an Air Force statement, the two Tiger F-5E aircraft “made lateral contact”. J-3086 crashed into a pond, but the pilot, Captain Michael Duft successfully ejected and landed in a greenhouse. He suffered, what was described as, “a fracture of the foot and small cuts and bruises”. The second aircraft, J-3088, although it lost about 75% of the right hand horizontal stabilizer, landed safely. The planned weekend appearance of the Patrouille Suisse in Leeuwarden was cancelled and on the following morning, a team consisting of military police, safety experts of the Air Force, and an air accident expert, together with a medical and care team to take care of the pilots involved, travelled to Leeuwarden. The crash of an aircraft of the Patrouille Suisse during this practice for the air show is the first such incident in the 52-year history of the Swiss aerobatic team. Captain Duft or ‘Püpi’ has been with the team since 2015 and flies directly besides the leader on the left wing, in position ‘3’. He has 1,250 flying hours on the F/A-18, F-5, PC-7 and PC-21. 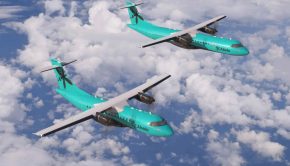 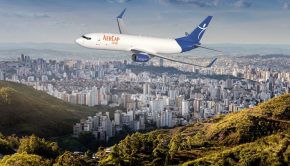